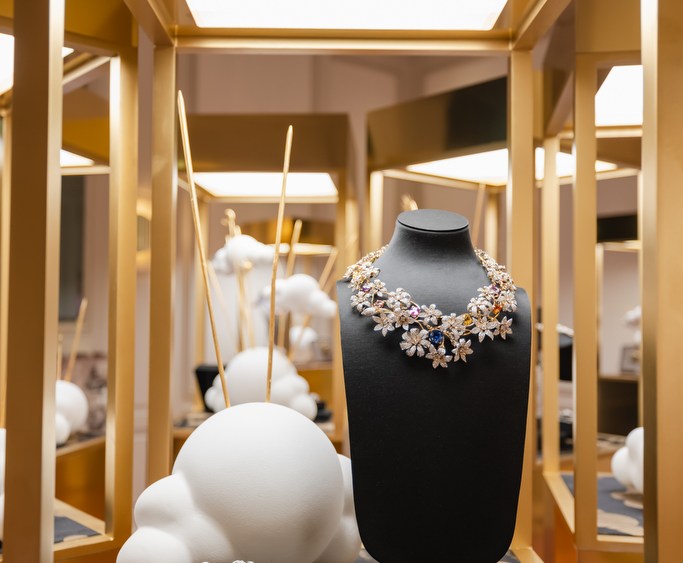 Fir tree-colored emeralds, a 95-carat melo melo pearl hailing from a poodle-sized snail in the South China Sea and red diamonds so rare that a stone barely surpassing the one-carat mark is priced well within the seven-figure range: these are elements of Tiffany & Co.’s new Blue Book collection, its annual release of exceptional high jewelry pieces, which was revealed in New York this week.

In the interest of striking new intimacy with its highest-spending clients, Tiffany switched up its formula this year to suit the current times. While the jeweler had previously staged galas or big exhibitions to sell pieces from its Blue Book collection, this year it took over a manicured five-story town house just north of the Pierre Hotel — merchandising a series of salons and showroom spaces to entertain clientele with private one-on-one appointments.

The idea was to delight Tiffany’s loyal collectors with a sense of being invited into the brand’s own home, and so the jeweler aptly named the concept its Tiffany Townhouse. Authentic turn-of-the-century Tiffany lamps and floral arrangements by Emily Thompson, in-house demonstrations with Tiffany diamond setters and hand-engravers, along with high tea service, seem to have turned a charm — a large portion of the Blue Book collection sold within the installation’s first few days, with some clients even walking out wearing their newly acquired pieces.

Tiffany chief executive officer Anthony Ledru said of the concept: “The Tiffany Townhouse is the embodiment of the lifestyle approach we are taking. We are excited to offer an immersive experience that showcases the world of Tiffany & Co., highlighting our heritage and craftsmanship legacy. The town house allows clients to engage with the house in an intimate and personal setting and also brings art, architecture and a bespoke offering that is second to none, to show our extraordinary Blue Book collection.”

The collection is somewhat of a portal into LVMH Moët Hennessy Louis Vuitton’s early influence on Tiffany. Tiffany chief gemologist Victoria Reynolds said there is a continued focus on legacy colored gemstones like morganite and tanzanite, popularized by Tiffany’s founder Charles Lewis Tiffany. “People know rubies, emeralds and sapphires, and of course Tiffany diamonds are the best — but they don’t really know about these lesser-known stones. That’s where I feel so passionate about having these legacy gemstones like kunzite, morganite and tanzanite. It’s part of the tradition of what LVMH will want to do — lift up the most extraordinary diamonds and colored gemstones in the world,” she said.

Upon entering the Tiffany Townhouse, attendees were greeted by the Tiffany Blue Basquiat painting recently featured in the jeweler’s ad campaign with Jay-Z and Beyoncé Knowles. The entryway was also marked with a vitrine featuring the 128.54-carat Tiffany Diamond — worn by Knowles in campaign imagery. Tiffany partnered with the Metropolitan Museum of Art and Sharon Coplan Hurowitz to display pieces from The MET 150, a portfolio of special works by contemporary artists that was copublished by Coplan Hurowitz.

Each town house floor was merchandised with elements of this year’s Blue Book offering. The residence’s music room was home to Tiffany Blue Book pieces that touch on the theme of Colors of Nature — with one-of-a-kind designs, each of which are two years in the making.

Among the more special pieces in the room: a solid gold, walnut-shaped travel clock; a high jewelry gold watch with 197 diamonds on its bracelet totaling 24 carats; special Australian black opal pieces, and thoughtful diamond and emerald drop earrings, in which the pear-shaped emeralds weighing 13 carats can detach — transforming into more modest diamond studs.

Embroidered on silken masks worn by each Tiffany employee on site was the silhouette of Jean Schlumberger’s signature “Bird on a Rock” brooch, designed for Tiffany in the 1960s. This year’s Blue Book collection is half comprised of designs under Schlumberger’s signature — a designer known for his surrealist jewelry creations, first for Elsa Schiaparelli and later for Tiffany.

“I think you could take it as a sign of our exuberance,” Reynolds said of Tiffany’s renewed focus on Schlumberger’s historic works. “I think you will probably see a greater emphasis on it. Schlumberger is only at Tiffany & Co. and I think it really reinforces everything we are about, doing the unexpected and extraordinary craftsmanship.”

In the Schlumberger gallery — already sold through of much of its product — Tiffany revealed a road map toward placing new emphasis on one of their legacy collections. While Schlumberger’s designs have always been an important part of the jeweler’s arsenal, Tiffany’s new leadership sees it as a critical advantage that deserves more resources and attention.

For Blue Book, an assortment of one-of-a-kind Schlumberger pieces had either been remade with stones or produced for the first time, drawing upon Schlumberger’s archive of sketches.

“It would have looked different if you walked in here four days ago — once something is sold it’s sold [and we take it off the display] — you wouldn’t want someone to see it and fall in love with it,” Reynolds said.

“I think [LVMH] has been such an incredible asset. They love, LOVE high jewelry and Schlumberger and craftsmanship and authenticity. They have been so involved and passionate about it, so it’s been an incredible few months [since the acquisition],” added Reynolds, who has been with Tiffany for 34 years.

While many of the stones sourced for the collection are among the world’s rarest and finest in quality, they were set in a distinctly casual manner.

For Reynolds, this is part of Tiffany’s success and DNA as an American jeweler. “I think high jewelry is not just something worn in a formal setting — I wear jewelry with jeans, when I go out at night. It’s about loving jewelry and it being part of who you are and how you style it. It’s a form of self expression — something you wear every day, not just keep in the safe,” she said of her outlook on the collection.

And in a first for Tiffany, the jeweler set up a room of exceptional loose gemstones that can be purchased for a bespoke jewelry design experience. Pairs of flawless diamonds, special demantoid garnets and those aforementioned red diamonds — which Reynolds estimates there are about 20 of in the world — can be purchased and made into one-of-a-kind pieces that speak to collectors’ unique tastes.

This is the second collection of the Colors of Nature concept, and the first available in New York. In April, Tiffany exhibited a Blue Book installation in Shanghai, and the remaining unsold pieces from that outing have carried over to this New York viewing as well. Next up, Tiffany will take the remaining pieces on the road to Los Angeles to be unveiled before the holidays.