"We don't want to be intimidating because we believe beauty should be for everybody," Tiffany & Co. chief executive officer Alessandro Bogliolo said of the American jewelry brand's new store concept.

At the close of a tumultuous year, Tiffany & Co. is turning the page with a new format store at South Coast Plaza in Costa Mesa, Calif. The 12,000-square-foot boutique aims to disrupt the jeweler’s traditional over-the-counter retail model by inviting shoppers to enter discovery mode.

“South Coast Plaza is the best comparison from the way we were to the way we are and will be,” said chief executive officer Alessandro Bogliolo, explaining how the original 30-year-old store’s standardized display cases and dark wood decor have given way to an open floor plan, more touch points, product out in the open to try on, and experiential spaces, including the second Tiffany Blue Box Cafe after the one at the New York flagship.

South Coast Plaza is second only to the Fifth Avenue flagship in sales volume for Tiffany, and the brand saw a need for a bigger store (the original was just 7,000 square feet) with a more central location in the shopping center. It’s situated between the Carousel and Jewel Courts, and as it so happens, is facing the Louis Vuitton California Dream pop-up. LVMH Moët Hennessy Louis Vuitton is in the process of finalizing a deal to acquire the storied American jeweler for $15.8 billion in one of the biggest merger and acquisition deals of 2020.

The store — number 18 for Tiffany in California — has two entrances and 360-degree stand-alone counters where customers can interact side-by-side with sales associates. Upon entering the jewelry side, front and center is an interactive “Discovery Table” featuring new and exclusive product, such as the T1 collection bangle and ring in 18-karat rose gold with baguette diamonds.

The Collections area features modern classics like Elsa Peretti’s Seventies-era Bone cuffs (brisk sellers in red, blue and green for the holidays), and the Peretti 18-karat gold mesh bra famously featured in Halston’s 1975 fashion show and worn by Zoë Kravitz on Oscars night in 2019. A Style Bar features Tiffany T and HardWear collections to try on.

“It’s the opposite of the old concept, which was the house of classics where you know what you are looking for,” said Bogliolo, who helped drive Tiffany third-quarter net earnings up 52 percent.

The vibe gets more serious (and expensive) the deeper one ventures into the store, with an expansive selection of high jewelry, including Shlumberger Floral Leaf brooches and invisibly set sapphire earrings; sunny yellow diamonds, cornflower blue tanzanite and Windex-hued kunzite crafted into one-of-a-kind pieces. The latest collection, Colors of Nature, will land in April.

The Love and Engagement area is diamond central, with modern furnished private salons on either side for consultations, including an art-filled dining room large enough to accommodate a private soiree, like a bridal shower, for example.

The second entrance opens up into the home accessories boutique, where South Coast Plaza Tiffany Blue logo mugs are on offer, along with the brand’s popular pet bowls (in bone china for $100 or sterling silver for $2,500), Elsa Peretti candlesticks and tabletop. Beyond that, the intimate Blue Box Cafe has seating for 48. Although the restaurant is closed because of local coronavirus restrictions, bento box-style takeout options are available, including Breakfast at Tiffany for Two.

“Variety is crucial,” said Bolgiolo, still a believer in accessible luxury even as some predict LVMH will take the brand more upscale. “That’s the beauty of Tiffany as an American luxury brand that it has an innate sense of inclusivity that doesn’t mean ‘cheap.’ It means it’s the opposite of excluding. Exclusive has traditionally in luxury been given a positive connotation. But in reality, personally, I think exclusivity is nothing to be proud of. Tiffany is inclusive because it’s always offered amazing stones for a huge price but is at the same time a place you feel comfortable. We don’t want to be intimidating because we believe beauty should be for everybody.”

While Tiffany plans to use the discovery principles of the South Coast Plaza store in more locations going forward (a similar concept will open soon in Philadelphia, and others will follow in Asia next year), the ceo wants to avoid repetition. “In the Nineties, the idea as far as store design was you had to be consistent. A customer no matter if she was in South Coast Plaza, in Tokyo or in Düsseldorf would recognize the place as Tiffany. But what happened, not only with Tiffany, is most brands kept duplicating the same concept again and again to the point the magic went away. Here, we want to try to provide an experience that’s more versatile.”

While California is teetering on the edge of another safer at home lockdown with escalating virus cases, and Tiffany could be forced to close the new store just as it’s opening during the busy holiday season, Bogliolo is still bullish on brick-and-mortar for the brand longterm.

“People are desperate to go back to normal,” he said, while acknowledging how shopping has changed. “The average price of what we’re selling online has gone up, and we have found customers are buying jewelry online. But the intention to go to the store is still there because there is an experience of your eyes seeing and discovering these beautiful gemstones that’s difficult to replicate.” 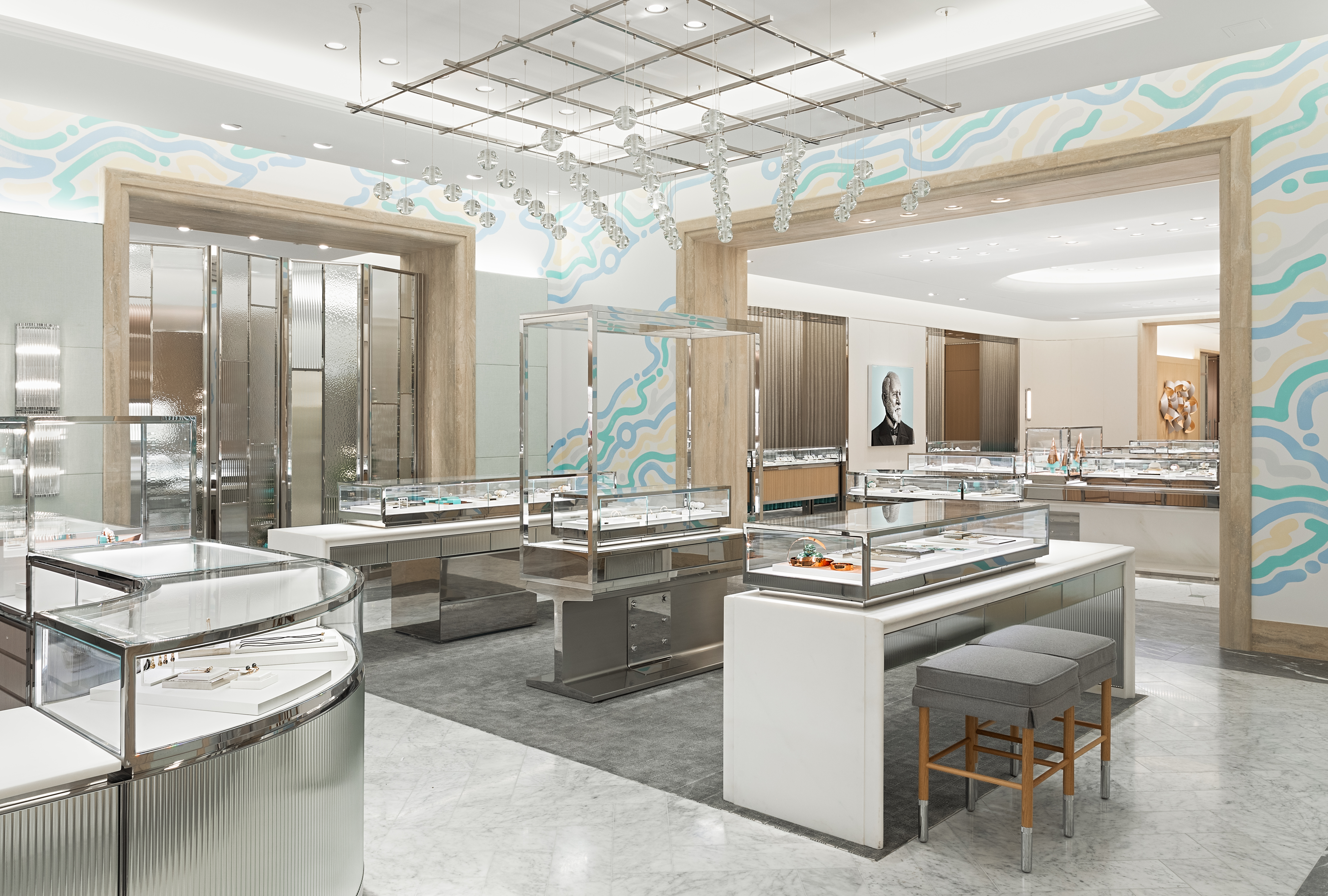