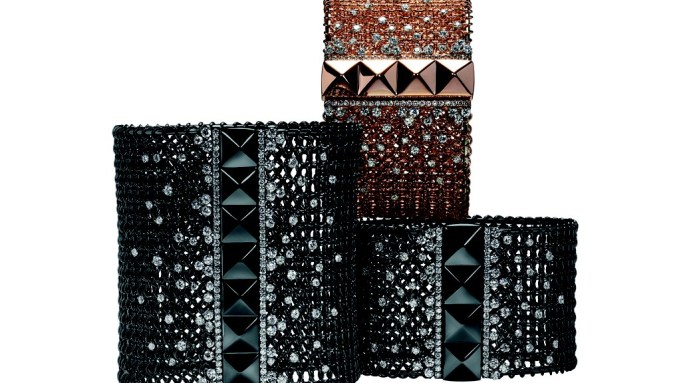 VENICE — The About J trade show — an exclusive preview of artisan jewelry that immediately precedes the fall edition of the larger goldsmith’s art, gems and jewelry Vicenzaoro fair — brought together 34 top-tier brands this season.

Cliff Miller, co-owner of the MJ Christensen jewelry store in Henderson, Nev., outside Las Vegas, said he and his wife were on the hunt for “that next step up in design capabilities,” and noted they were impressed with exhibitors Rodney Raynor and Sutra, in particular.

“I love this boutique environment where you’re not pressed, and you can have very personal conversations and get to know each of the designers a little better,” Miller said.

Masayoshi Itakura, manager of the Japanese Takashimaya department store’s luxury brand jewelry and watch division, said he was looking for pieces currently unavailable in Japan, noting, “The background of the design is important.”

“Japanese customers like the stories behind products,” he said, adding that luxurious details or a brand name alone were not enough to drive business.

Simona Toader, chief executive officer of Maison Haute Horlogerie, a watch and jewelry dealer in Bucharest, Romania, said she was scouring for smaller items — earrings, bracelets, rings and assorted children’s pieces — in a wide price range to appeal to a broad swath of customers.

“I’m confident that we’ll find what we’re looking for. Italian jewelry is the best,” she said, noting she also frequently works with Danish and Turkish brands and that “jewelry from Italy is special for its design and creativity.”

The Italian vendors manning the stands certainly got the message, with many of them playing up design specialties and local craftsmanship.

Maria Barberis of Carlo Barberis noted that her grandfather had founded the business in Valenza in 1929, and the whimsical products, all still made at the factory there, were characterized by “a love of fantasy.”
“We like to study custom-made jewelry with our clients,” she said. Key markets for the brand are Japan, Eastern Europe and the Middle East. She said she hoped to build greater ties with Asia and the U.S. at the fair.

Alessandro Gabriele, a spokesman for Crivelli, said the brand is striving to expand in Russia, the Ukraine and the Middle East. Among the hot items this season, he cited bangles and stretch bracelets, some adorned with pyramidlike studs.

Marco Valente, who founded his company in 2009 after working in the industry for many years, said he focused on working with varied materials and creating jewelry that was comfortable as well as attractive. “I consider myself successful when a client decides to keep wearing a piece for years,” he said. “A jewel cannot be serial. High-end jewelry is inherently exclusive.”

A fervent believer in keeping production in Italy, his pieces range from 2,000 to 20,000 euros, or about $2,700 to $27,000 at current exchange. “My customers are appreciative of research and the uniqueness of pieces, but there is a desire to avoid ostentation or flashiness,” he noted. He described a new technique he had developed that allows people to adjust the size of rings so they can wear them on different fingers.

Currently, his pieces are available at about 50 sales points around Europe, but he aims to expand further in the U.S. and in Eastern Europe.

“We only work with diamonds and real color stones,” she added. “In every single piece you find crocodile….The brand is very recognizable.” She said the line was performing especially well in Russia.

Paolo Mantovani, the new president of Fiera di Vicenza, which organizes both About J and Vicenzaoro, expressed satisfaction. “We’ve seen a 25 percent increase in companies present at About J this year, and Fiera di Vicenza, which is always attentive to innovation, is really holding its own in this globalized market and European economic crisis.”