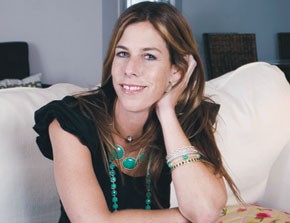 VENICE BEACH, Calif. — If her parents hadn’t pushed her, Irene Neuwirth might still be teaching horseback riding instead of designing jewelry that sells for tens of thousands of dollars.

“All I ever wanted to do was ride horses,” said the 32-year-old Neuwirth, who was once ranked fourth in the nation in her division. “But I was making like $9,000 a year and my dad said, ‘Find something else that you love.’ Now he jokes that I’m the breadwinner.”

Eight years ago, Neuwirth began beading as a creative outlet and sent a package of 10 necklaces to Barneys New York with a magic marker note that read, “Hope you love it.” The store subsequently placed an order and Neuwirth’s goods became bestsellers. Two years later, Neuwirth got a financial partner and began to grow her business.

“Sales quadrupled the first year, and have been doubling ever since,” she said of her company, now six years old.

She began taking metalworking classes and learned how to carve wax molds, skills that allowed her to move beyond beading to create chains and pavé diamond settings for her natural stones. Each of Neuwirth’s pieces is based on groups of single-colored stones that she allows to dictate the direction of her designs.

For the most part, Neuwirth sets her stones in matte 18-karat yellow gold, which lends a modern feel to the long cabachon chains, bangles and cocktail rings. She’s also started to incorporate micro pavé-set diamonds into her pieces, whether they’re covering a ring made from a flat, irregular boulder opal or delicately framing the petals of flower-shaped earrings. Platinum is used sparingly, while rose gold is a favorite.

Wholesale prices range from $1,500 to $10,000 and up. Neuwirth designs about 40 new pieces each season, but keeps classics such as the cabochon chains and the flat gold hanging earrings in her collection.

“It’s important not to throw out everything, especially since my customers like to mix pieces from different seasons and they’ll look for a particular style again,” she said.

Last November, the 12-person company moved into a 4,200-square-foot townhouse in Venice Beach, the artsy enclave where Neuwirth grew up — she still lives three blocks away.

Neuwirth’s contemporaries include other independent jewelers such as Renee Lewis, Devon Paige McCleary, Dean Harris and Yossi Harrari. While she personally pounds the pavement to get each new account, Neuwirth believes it’s earned her loyalty with her stores.

“Retailers have taken risks on me, but it’s had a spiraling up effect,” she said.

Women buying for themselves make up 99 percent of Neuwirth’s customer base because her pieces have such a fashion-meets-luxe appeal.

In this, her fourth year at Couture, Neuwirth says she’s happy to add just one new store with each show.

“I’m in 29 stores now, and I’d be happy to stay that way and grow those relationships,” she said of her accounts such as Jeffrey in New York, Elaine 23 in Dallas and Meridien Jewelers in Aspen, Colo. “But I finally feel like I’m ready to grow internationally.”