It Takes (More Than) Two 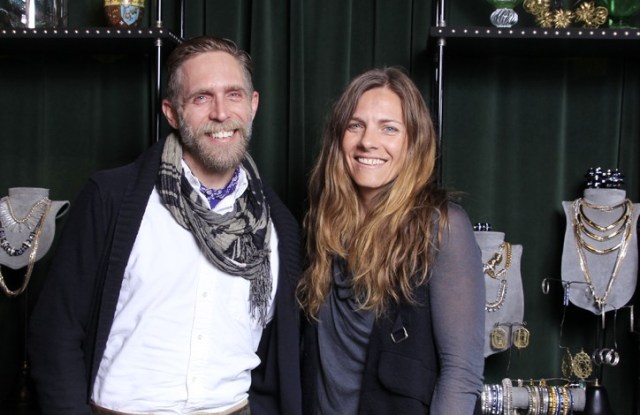 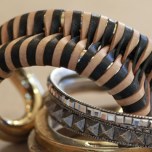 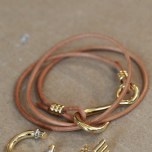 Philip Crangi doesn’t know the meaning of sibling rivalry. The jeweler has worked alongside his younger sister, Courtney, who handles the business end, since they launched the line together in 2001. A few months later, he named his costume collection (the rather egoless) Giles & Brother — Giles is Courtney’s old childhood nickname, though neither one of them can remember its exact origins.

Many of the company’s supporting cast of characters are related, as well. Their father, Philip Sr., created the metal fish sculptures decorating their year-old boutique (which, appropriately, they call “the Crangi Family Project”) in New York’s Meatpacking District. Meanwhile, Courtney’s partner, Sheri, manages the store, and her son, Ryan, works at the studio. Ryan’s girlfriend, Amanda, is on staff at the boutique. “We do everything together,” says Courtney. “This really is a family business.”

Now, meet the newest member of the Crangi clan: Lucas Design International. Giles & Brother has just teamed up with the Los Angeles-based manufacturer, which happens to be helmed by a family duo of its own, cousins Jason and Daniel Landver, who are, respectively, president and creative director, and chief executive officer.

“When Courtney met them, she immediately said, ‘These are people we can talk to,’” says Philip. “And that means getting into heated arguments, if necessary, or being able to just hang out and talk casually about things. It felt very much like an open, comfortable dialogue.”

The Crangis were extremely selective in choosing a partner — “we’ve been looking for the past two years, at least,” notes Philip — but for good reason, since this is the first time Giles & Brother is taking production outside of the firm (the first collection is for spring).

At first glance, though, the coupling could appear off-kilter. Aside from sitting across the country from the New York-based Crangis, Lucas Design is known for its licensing deals with Playboy, Warner Bros. and Disney. What exactly says “perfect fit” about a company that makes Tinker Bell bangles and earrings? Crangi’s jewelry, after all, has a refined and rough-hewn heirloom feel — cuffs in the form of bent railroad spikes, Art Deco-inspired pyramid rings and icicle-shaped pendants.

“First and foremost, the respect for design and the integrity is there,” replies Courtney. “And second, the quality of production is incredible. It’s all about the details.” She points out that Lucas Design was behind the terrific Tom Binns collaboration with Disney Couture, which included some wondrously eclectic necklaces made from tiny broken teacups and kettles. “They also produced a collection for ASOS that really sold me,” she adds. “It was super technical, inside and out, so I felt we could continue the conversation.”

Courtney is also quick to emphasize that the partnership is a manufacturing and distribution deal — not a license. “We’re keeping control of our brand,” she says, adding that Lucas Design also is working with Hatch Showroom for sales as well as metal testing.

“We have a big distribution network,” adds Daniel Landver. “We can leverage all the relationships we have in other countries to grow his business internationally, too.” Currently, the Crangis are eyeing markets in Russia, China, South Korea, Europe and the Middle East.

“Courtney and I realized we needed to focus on what we’re good at,” says Philip, “and what we’re good at is development concepts and design. The more energy we were putting into doing the production, which we did here in our studio, the more it took away from everything else. It really started to drain us.”

The Crangis began reevaluating Giles & Brother back in 2007, when Philip nabbed $50,000 as runner-up to the CFDA/Vogue Fashion Fund. “I think that was the first time we ever really had to have a business plan,” says Philip, a Rhode Island School of Design graduate. “At that moment, we really rallied our forces and focused on what we wanted out of the brand. We wanted to take it to the next level.”

Joining forces with the Landvers is just one of many moves the Crangis have undertaken. The pair also restructured its product range for spring, with an eye toward streamlined merchandising. “Giles & Brother really grew on a merchant-based model, where you have thousands of [stockkeeping units]. But it was a model we were shoehorned into,” Philip explains. “We used to joke that the line sheet looked like the queen’s phone book. Every time Courtney met with a buyer, the store would want to see a design in a different color or something, so we had to add that. It got out of control.” In many ways, he adds, the designs now will come full circle “to the original idea of Giles & Brother, which is artisanal. You must always see that hand.”

Which isn’t to say the new collection will exclude the cleaner looks. The spring roster also features gold-finished brass bangles, punctuated by the occasional chain link, and wide cuffs laced with two-tone strips of leather. “I love the idea of a collected aesthetic now,” Philip remarks, “where it looks like a collection not by one designer, but one collector.”

The Crangis also are considering a second New York store on Madison Avenue, which was Courtney’s idea, as well as developing categories other than jewelry. The two remain mum on the latter, except to say: “Possibly leather goods and eyewear,” according to Courtney.

“I believe success is making yourself available for opportunity,” her brother remarks, “but also letting the right opportunity come to you and not forcing it too much.” As Philip wraps up that thought, their brother-sister dynamic comes into full display as they finish each other’s sentences like twins.

“The most important thing we’ve learned…” begins Courtney. “…is to know thyself,” finishes Philip. Courtney: “We are…” Philip: “…a hell of a lot older than we used to be.”

Philip: “And much more certain.”