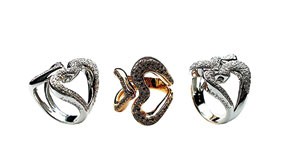 MILAN — High-end Italian jewelers, aware there is no real antidote to the weak dollar’s impact on their prices and the turbulent U.S. economy’s effect on exports, have rolled up their sleeves to keep their businesses growing.

Many are adjusting to the adverse euro-dollar exchange rate by absorbing price increases, investing more in design, enhancing services to their points of sales and whittling away any superfluous spending. All their strategies are aimed at keeping a lid on prices, which in most cases will remain flat throughout the year.

“We mustn’t be greedy, especially in the U.S., which has done a lot for Italian jewelry firms and given us lots of satisfaction,” said Franco Pianegonda, owner of Pianegonda. “And we must continue to make high-end, special and artsy products that consumers crave.”

Roberto Coin, owner of the namesake jewelry firm, believes established companies will ride out the current economic storm. “There is no strategy to fight the weak dollar, but I think that especially in difficult moments, one reaps the benefits of having a good reputation because if a jewelry store or a department store needs to drop a client, they’ll take that into consideration,” Coin said.

He pushed his creativity to craft what he calls “intelligent jewels,” or pieces that look more expensive than they are. As examples, he cited a bracelet with a carat worth of diamonds randomly sprinkled all over versus the same piece with fewer diamonds but clustered together for a sparkly impact. The same held true for an elaborate necklace that looks heavier than it is.

“The consumer will be happy to pay 20 percent less but still have a great look,” said Coin.

Pianegonda said he was forced to tweak his prices upward between 3 and 7 percent.

“Unfortunately, it’s not only the exchange rate that is indenting our profits because these increases are across the board, from higher labor costs to raw materials,” said Pianegonda, who said last year’s swing in the euro-dollar exchange rate impacted profits by about $400,000.

That said, he just returned from a trip to the U.S. West Coast where he held a string of trunk shows and noted how retailers are more optimistic despite wary consumers.

Marco Valente, chairman and chief executive of the namesake firm that sits under the Gioielli d’Italia umbrella, believes the special appeal of a high-end jewel partly supersedes the impact of the soft dollar.

“We’re obviously not jumping for joy about the situation, but historically speaking there’s an interesting pattern to consider when the price of gold rises and it’s that consumers buy more jewelry because they view the purchase as an investment, differently from a bag, for example,” said Valente, who also produces John Galliano’s jewels.

While companies are generally absorbing the unfavorable exchange rates that impact profits, they are also trying to boost sales by adding services such as trunk shows.

At Antonini, grappling with difficult market conditions is a multipart strategy. The firm, which will celebrate its 90th anniversary next year, cut back on the number of trade fairs, relegating its investments to Baselworld and the Las Vegas Couture show.

At Basel, Antonini presented a wider selection of 52 pieces, and Sergio Antonini, co-owner of the family-run firm, said he opted for trimming margins rather than raising prices.

Secondly, in the wake of an internal reshuffle that saw Sergio’s brother, Carlo, who was designer and responsible for the U.S market, leave, Antonini signed up Viewpoint, a communications and distribution office to further penetrate the market and raise its U.S. profile.

Davide Staurino, co-owner of Staurino Fratelli, said the firm has been forced to slightly tweak its prices upward, but is trying hard to whittle any superfluous costs while optimizing internal resources.

“We try very hard to give our clients the most favorable price, but it’s a great effort and the fact that the European Central Bank isn’t cutting back the interest rates makes it harder for a country like Italy that lives on exports,” Staurino said. “During difficult economic times, people ponder before investing in a piece of jewelry.”