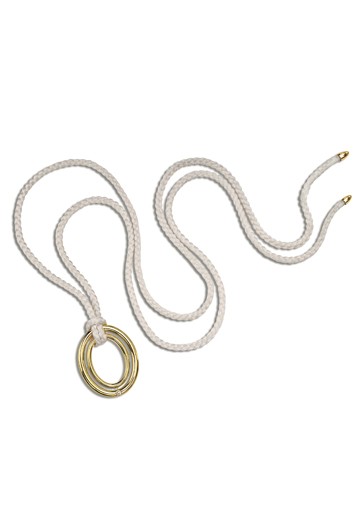 Ivanka Trump wants to share her style with the world.

True to the Trump “think big” tradition, she has set a goal of tripling sales of her namesake fine jewelry firm by going global.

Ivanka Trump has plans to roll out to 30 top-tier independent guild jewelers in the U.S. Also under consideration are 10 locations in Asia and the Middle East — a combination of in-store boutiques and stand-alone shops with partners or franchisers. Trump has one boutique on Madison Avenue in New York. Initial plans for a Las Vegas store were canceled after the recession began.

The multitasking real estate executive, reality TV personality, author and now footwear designer — through a deal with Marc Fisher Footwear — has tapped chief executive officer Andrea Hansen to spearhead the company’s international expansion and its foray into wholesale distribution. The jewelry firm was founded in 2007 through a partnership with Trump and Dynamic Diamond Corp. and is said to have had $5 million in sales in 2009.

Trump described her brand’s expansion as “quick but prudent.”

“Everything has to be scalable from an economic perspective, but each venture that I get involved in also needs to reinforce, rather than undermine, the larger Trump brand,” she said.

In the U.S., the company is approaching high-end boutiques in cities such as Phoenix and Los Angeles. In Asia, there are talks of entering Seoul, Hong Kong, Beijing and Shanghai. In the Middle East, there are plans to enter the markets in Dubai and Abu Dhabi. There are also talks to go into Istanbul, where the Trump real estate organization is developing a property.

“Ivanka offers the industry the most important assets and characteristics retailers must demand of their brands now: relevance, a clear and original point of view, good value and the ability to interest and motivate the consumers to shop,” said Hansen, who noted that Trump’s 700,000 followers on Twitter, along with TV appearances and media attention, are key assets.

Recently, Trump tweeted about her favorite earrings, which retail at $750, and the store has had trouble restocking because of the demand that followed.

Hansen has spent the last several months developing and growing the brand’s collections and adding styles to offer a more diverse price range. The median price has gone to $4,000 from $10,000.

The firm will keep its more expensive styles, such as pavé diamond spherical necklaces and elaborate diamond collars that can go from $100,000 to $2 million, but has also added 65 styles, 20 of which will retail for less than $2,000. Hansen has focused on offering pieces in the $450 to $900 range, a sweet spot for Trump’s target of self-purchasing women. Such styles include small hanging earrings with diamond accents, silk cord bracelets with the firm’s signature oval in gold, and rose gold and rock crystal pieces that echo the line’s far more expensive mixed-cut diamond hoops.

Ultimately, there are plans to grow the brand portfolio to include ladies’ watches, eyewear, fragrance, tabletop and accessories. There also is the potential to focus on other gemstones in the jewelry collection, as opposed to simply diamonds.

Trump said the uniting factor in what she does — from real estate to fine jewelry — is luxury.

“There are actually many similarities between the businesses,” she said. “Luxury takes many forms…but many of the quality priorities and branding considerations are similar. It is also great to have a real estate background that I can apply to my jewelry company as we expand and look for more retail outlets.

“Developing a cohesive brand identity is never easy and requires tremendous work, thought and discipline,” Trump said. “With so many talented jewelers out there, the biggest challenge we had was reinventing important jewelry and making it our own.”