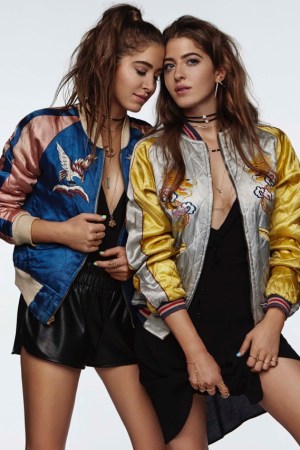 The Jacquie Aiche brand is really more of a lifestyle. Her showroom-cum-studio is something like Andy Warhol’s Factory, if one swaps New York for Los Angeles, Quaaludes for marijuana and silk screens for fine jewelry and gemstones. And it wouldn’t be L.A. without a little spirituality mixed in — Jacquie’s mystic has an office next to hers.

The pioneer of the body chain calls her eclectic group of female friends — who run the gamut from pop stars to cool, young girls who work out of her former home assembling her jewelry — here “tribe.” A creative bunch, it comes as no surprise that collaboration should ensue now and again — last summer saw a selection of flash tattoos designed with pal Rihanna.

The latest endeavor is with tribe members Sama and Haya Khadra, identical twins pictured outside many a fashion show while perusing collections to buy for their mother’s store in Saudi Arabia. Even by “It” girl standards, Sama and Haya have a well-connected background. Ethnically Palestinian and raised between London, Dubai and Los Angeles, they are lovers of fashion, art and music and have their fingers in all of them. They are in their final year at the University of Southern California studying film production and fine art with a concentration in intermedia sculpture. Their identities flow so seamlessly between the two that it’s a little difficult to know where one ends and the other begins. They even share the same Instagram account.

Sama and Haya’s relationship with Jacquie blossomed a few years ago, when the girls frequented a Pilates class with Miley Cyrus, who would adorn herself in Jacquie’s body chains to exercise. “We started buying for the store, then worked with her on a personal level doing custom pieces,” said Sama.

“The reason that we love Jacquie Aiche the brand is because it’s so easy to wear and layer. Her jewelry doesn’t try to look effortless, it just is because it’s so light. It becomes a part of your body, like a second skin. It just adds an instant cool,” said Haya.

“They actually came to me with the idea of creating a little capsule collection for them using geometric shapes,” Aiche explained. “I’m very organic and all of my designs are pretty free-spirited so I was a little taken aback. Once I found out that the vibrations that come from wearing geometric jewelry are healing in their own way, I thought it was really cool.”

“We kept having these crazy coincidences and serendipitous moments,” Sama said. “I was reading a few books on synchronicity, what these kinds of coincidences mean and that’s when I discovered sacred geometry.”
Haya elaborated, “It came to us so organically. I felt like it was a message to teach us about how all things are connected and the oneness of all life.”

For those rusty on metaphysics, sacred geometry classifies universal shapes, found in nature or man-made, that follow harmonious, mathematical proportions. The 15-piece collection Aiche and the twins designed focuses on some of these classical motifs, such as the “Christ Grid” and the “Flower of Life” rendered in 14-karat gold, diamonds, semiprecious gemstones and leather, ranging from $500 to $4,690.

“It’s not typically me but I’m also a chameleon and if I tap into it I can make it my own,” said Aiche. “I really don’t get my hands into something unless it’s going to be fun and inspiring for all of us. It was a journey, but a great one.”
There are more partnerships to come, including sandals with Mara and Mine for spring 2016.

“It’s really the reason why I started making jewelry,” Aiche said of her desire to continue working with other female artists, “I would tap into my clients and create one-of-a-kind pieces for them because for me it’s jewelry but it’s also energy that you’re carrying.”

Sama and Haya echo that belief. “There is so much power behind doing something with intention and I thought it would be so cool for people to carry that with them on their body,” said Haya.

Sama added, “[Jacquie’s] whole team is so close-knit it really feels like a family and we’re so happy to be a part of it.”