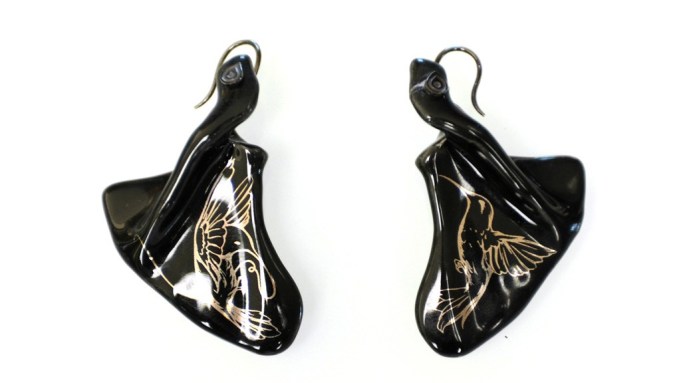 There are plenty of motifs in artist James Jean’s obsessively intricate paintings that lend themselves to fashion — Miuccia Prada, for example, was so inspired that she commissioned Jean to create the prints for her 2007 “Fairy” collection.

“I have male and female fans, but people always tell me that my work has a very feminine quality,” said Jean, padding around his light-filled Santa Monica, Calif., home-studio.

So it’s no surprise that last season, Jean decided to get into the game himself and transform his colorful paintings into a line of silk scarves and jewelry called OVM (pronounced ovum, like its egg-shaped logo) priced from $400 to $3,600.

“A lot of my contemporaries are doing toys and plastic figures, but that’s not challenging. Jewelry has definitely been an interesting challenge,” he said.

His first collection, “Butterflies,” was made from brass, epoxy and resin, pieced together to create colorful 3-D pieces. Next was the “Drip” group, made from sterling-plated brass accented with tiny diamonds.

In keeping with his “short attention span,” the fall 2012 collection, “Bones,” represents an entirely different medium: painted porcelain necklaces, bracelets and rings. While it’s also a motif he visits in several paintings, Jean said it was a new challenge to suspend the skull- and pelvic bone-shaped pieces on chains so they balance evenly against the collarbone.

He hopes to expand into other media such as small-scale sculptures, but he’s not planning to adhere to a seasonal schedule to appease retailers. His pieces sell only at his Web site, ovmlove.com, and his forthcoming collections will be timed to his art shows, at Ivory and Black Gallery in London this summer and Jack Tilton Gallery in New York next year.

“For me, the art is the main thing,” he said. “If I can keep it sincere then hopefully the rest of the collateral will fall in line.”