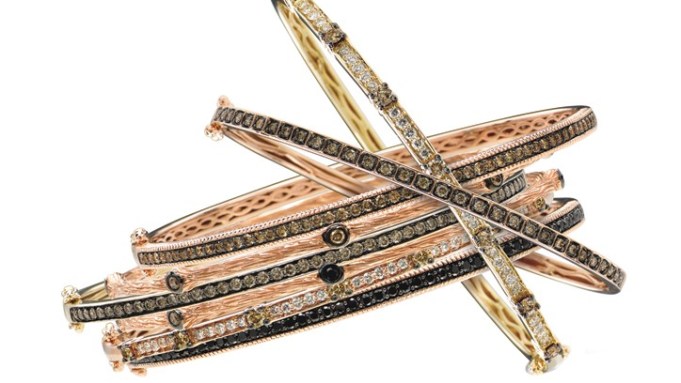 It’s a wait-and-see game for jewelers.

Preparations for the annual JCK and Couture fine jewelry fairs are coming to a close after a year of incredibly high ups and befuddling downs.

The Las Vegas trade shows — Couture takes place at the Wynn Resort from May 28 to June 2 and JCK takes place at the Sands Expo & Convention Center from May 30 to June 2 — are considered bellwethers of the fine jewelry industry. They’re where retailers of department, specialty and independent stores stock up on pieces for the holiday season. While last Christmas season was a bust, so close to the stock market nosedive, the Madoff scandal and related drama, brands are anticipating holiday 2009 to be better and more stable. The tumbling economy has severely affected the fine jewelry industry with the lack of Wall Street dollars and black-tie events to which to wear the jewels. The middle end — with pieces that retail between $2,000 and $10,000 — which until now has been the bread and butter of the business, has instead been suffering the most.

Brands, now more than ever, are amenable to working with retailers. Firms are flexibly trading in merchandise that has grown stale to freshen store assortments and have lowered their buying budgets. Companies are generally being conservative with the number of launches and collections making their debuts at the end of the month.

“Everyone’s inventory levels should be more in line with consumer demand,” Blum said.

He noted that the bridal collection, quintessential Yurman styles and watches have been strong segments for the firm, while basic gold jewelry is not performing well.

“Last year, there was a cloud of uncertainty hanging over the consumer,” said Greg Kwiat, chief financial officer of Kwiat, the diamond jewelry brand. “In recent months, the uncertainty has dissipated and we are seeing luxury consumers re-entering the market. Even with only modest improvements in the general economic conditions, we expect that luxury shoppers will be in the market in greater numbers for holiday 2009, relative to last year.”

Kwiat is homing in on an always-important sector to its business: bridal and classic diamond jewelry. The firm will launch two collections with classic motifs.

“We are feeling consumers’ moods lighten,” said Brian Ripka, president of Judith Ripka Creations. “Store traffic and sales have increased in the last month, and our strategic marketing partnerships have proven successful in generating new business.”

Judith Ripka has partnered with charities such as Dress for Success and donates a percentage of purchases in its stores to the organization.

“The reason we have been so successful is marketing,” said LeVian, whose firm’s ads regularly appear in fashion magazines such as Harper’s Bazaar.

The average Le Vian product retails for $2,000, a price point still performing for the firm.

Janet Goldman, founder and chairman of Fragments, the New York showroom that also has two namesake stores, said the strongest price segment is from $200 to $500 and that the $2,500 to $5,000 bracket has weakened.

“Customers have psychologically adjusted to these economic conditions and designers are much more sensitive to the price-value relationship of their assortment,” said Goldman. “Customer confidence is slowly returning. The urge to indulge never goes away.”

Indulging in jewelry continues to take place in the U.S. and abroad. Several brands that have long diversified their assortments with opening price points, a median range and a high jewelry collection are all but abandoning lower price points.

In the past, de Grisogono introduced more opening price points with items selling in the low thousands of dollars, but the demand just isn’t there now, according to Giovanni Mattera, vice president of de Grisogono in North America.

“[Retailers] are willing to send back the pieces that are less expensive,” Mattera said. “They’d rather have the bigger pieces.”

Those pieces can climb up to $80,000. De Grisogono is working closely with its retail partners to optimize their merchandise assortments, including swapping in pieces that haven’t moved off the floor.

Los Angeles-based designer Irene Neuwirth adjusted budgets and sales expectations when the economy collapsed and is now exceeding those goals. Neuwirth also has focused on higher-end pieces with diamonds and gemstones into the five figures. She said women continue to crave investment pieces and styles that will become their signature.

Manhattan-based jeweler Henry Dunay is moving away from the $2,000 to $10,000 price zone and is focusing his attention on one-of-a-kind pieces and objets d’art.

“I went into one-of-a-kind pieces…things that are unusual, and brought them to the 21st century,” said Dunay. “I think that’s the customer that’s going to buy right now.”

Dunay said a recent trunk show at Neiman Marcus in Dallas was successful with pieces that range from $25,000 to $75,000. Dunay, like Neuwirth and others, are using trunk shows more as a selling tool to connect directly with the clients.

Silver collections are an avenue of growth for fine jewelers, many of which once considered the metal a less prestigious alternative to gold. Judith Ripka, Monica Rich Kossan and Stephen Webster’s silver lines have all been performing.

“Our first collection of women’s silver firmly established Stephen Webster within a new market, introducing a younger generation of clientele to our designs,” Stephen Webster ceo Terri Eagle said. “We have a great deal of strength in our design and product offering within silver, while continuing to build our client base for fine, one-of-a-kind pieces.”

Monica Rich Kossan said her business is strong across the board and is adding silver to several existing collections for Couture.

There are a new crop of designers making appearances at the shows, including Jemma Wynne and Elizabeth Locke, for whom Couture is the first trade show for her namesake company. Locke’s sole distribution until now has been at Neiman Marcus and her own boutiques in New York and Virginia.

“I’m looking to open new accounts because the whole economic world has been turned upside down,” said Locke. “I’m trying to broaden my sales base.”

Slane & Slane, which has a significant silver and gold business, is now boosting its silver category with pearls.

“With the difficult economic climate, metal prices in the news as a hedge against inflation, [there’s] a sentiment that it is inappropriate to lust after jewelry when millions of Americans are losing their jobs and homes,” said Marion Davidson, president and ceo of Slane & Slane, who believes orders will be conservative and that conversations with retailers will be focused on sell-though. “Now we see retailers buying gold from customers instead of selling gold to customers. This bodes well for sterling silver jewelry and nonmetal-based categories such as pearls.”