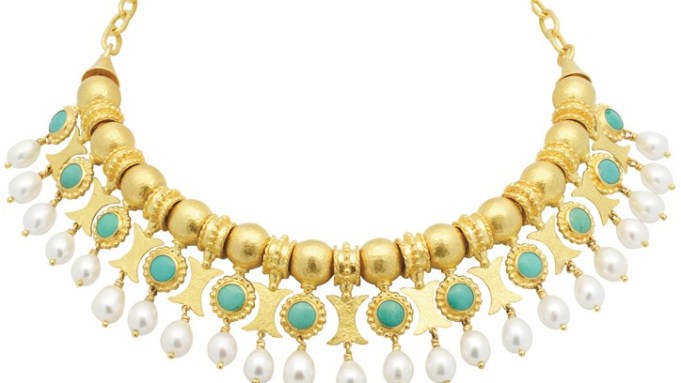 The Art of Afghanistan

Museumgoers are familiar with the typical souvenir-shop fare: decorative prints, scarves, cuff links, a mug or two. But how about a $28,780 necklace made of pure 24-karat gold, turquoise and pearls, one inspired by Afghanistan antiquities famously hidden during Taliban takeover?

To celebrate its upcoming “Afghanistan: Hidden Treasures from the National Museum, Kabul” show, the Metropolitan Museum of Art has teamed with New York-based jeweler Gurhan Orhan on a limited edition fine jewelry line inspired by the exhibition pieces, including the renowned Golden Hoard of Bactria. The collection, with prices starting at $350, accompanies a set of costume bijoux done in-house by the museum, similarly adapted from the artifacts. Prices for the latter range from $35 to $400. Proceeds from both collections will go back to the museum and its programs as well as the National Geographic Society and the National Museum in Kabul.

This is the first time the traveling Afghanistan exhibit, which bowed last year at the National Gallery of Art in Washington, D.C., will be getting matching merchandise of such luxe pedigree.

“We decided to do this because the exhibition has a high jewelry quotient,” said Michael Nash, manager of jewelry reproduction at the Met. “I would say at least 75 percent.”

And opting to collaborate with Orhan was a no-brainer, Nash said. The jeweler already uses the same ancient goldsmithing techniques in his own designs. He also is one of a trio of jewelry designers already selling their wares at The Met Store.

“The whole thing is very exciting,” Orhan said. “There aren’t too many examples of jewelry from that era. The designs were Roman- and Greek-inspired, but also had features from Thailand and India, a real mix of East and West. It’s really incredible.” “Afghanistan: Hidden Treasures from the National Museum, Kabul” runs from June 23 to Sept. 20 at the Met and will subsequently travel to Ottawa and London.

In some instances, getting older is appealing.

Calderoni 1840, the fine jewelry firm Damiani acquired in 2007, is expanding into the U.S.

Founded in Milan in 1840, Calderoni was once the official jeweler to the Italian royal family and aristocracy. Today, the line is Damiani’s answer to high jewelry and is being sold in its exclusive network of U.S. boutiques.

“[The jewelers who make Calderoni pieces] use special craftsmanship and special skills that are typical of the beginning of the century,” said Antonio Pavan, president of Damiani USA. “The workmanship is unique and very few, if none, of the competitors are able to reproduce this jewelry.”

The line ranges from about $10,000 to $250,000 for elaborate fancy cut diamond collars, cocktail rings and intricate earrings with precious gemstones. Within Calderoni, there are 15 collections and 50 new styles are launched each year. All pieces are made in Milan by hand and are numbered.

Damiani is looking to strategically grow its distribution into specialty stores, and so Calderoni will be shown for the first time at Couture at the end of this month.

“It has the value for the customer at this time,” Pavan said. “They are looking for something they could value: tradition, security, investment.”

Weddings are celebrations rife with tradition, but there always have been those to break from precedent.

For customers who aren’t keen on classic diamond engagement rings and wedding bands, Diamond in the Rough, the three-year-old firm that incorporates uncut diamonds into its fine jewelry, is launching a bridal line. The line of eight ring styles — ranging from yellow roughs set in swirls of micro pavé-set diamonds to eternity bands made of rough cognac diamonds will bow in Las Vegas, by private appointment during the trade shows.

“There’s nothing in rough in the bridal arena; not everyone wants a polished diamond,” said Anjanette Clisura, the firm’s president and co-creative director. “We have sold a really large amount through Neiman Marcus and Bergdorf Goodman without even marketing them as engagement rings.”

The collection ranges in retail price from $2,000 to $10,000, with some special pieces that go for more. The line will hit Neiman Marcus in the fall.

The Italian jeweler best known for his goldsmithing techniques will introduce his first men’s line — Marco Bicego L’Uomo — at Couture next week. Those familiar with his women’s line will recognize the easy elegance in his first collection for men, a range of 150 pieces that, in addition to Bicego’s trademark yellow, white and rose gold, uses white and black diamonds, colored enamel and leather.

“I’ve always created jewelry for myself and one-of-a-kind pieces for special customers,” Bicego said. “With this collection, every man will be able to express his individuality and fine-tune his personal style.”

Featured in his maiden collection: roped gold bangles, pendants with black diamonds and simple, structured rings. Pieces will retail between $520 and $8,000.