A member of the royal family, an island princess, and now, she is out to conquer jewelry. 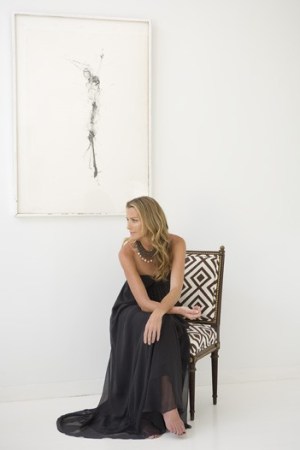 “A chick who has it all,” is how Jonathan Adler, the quippy, quirky interior designer, describes his friend India Hicks. “She’s absolutely gorgeous, unimaginably provenanced, has four gorgeous kids, a great husband, this spectacularly fab life, but she’s also completely hilarious and unimaginably irreverent.”

This story first appeared in the February 1, 2011 issue of WWD. Subscribe Today.

Adler and Hicks became close when they co-hosted “Top Design” on Bravo in 2008, three months after Hicks’ youngest child was born. The show was filmed over the course of seven weeks in downtown Los Angeles “with my poor baby stuck to my tit,” says Hicks, confirming Adler’s assessment of her.

On a recent snowy New York day, she and her partner, David Flint Wood (who have never married), were in town, leaving behind their warm, sunny home on the Bahamas’ Harbour Island to meet with retailers and editors for Hicks’ new jewelry collection. So there she sat in the Mark Hotel, eating potato chips and drinking Champagne out of a wine glass while explaining the motives behind her foray into jewelry, which was never part of her plan.

The India Hicks collection is divided into three lines: Initials, Hicks on Hicks (both of which launch in May) and Island Life (out for fall), all done in partnership with M. Suresh, the fifth-largest De Beers site holder in the world. Introductions were made through Christopher Ellis, an old friend of Hicks from London, who knew that M. Suresh was in the market for a personality that represents some kind of aspirational ideal — and that Hicks has the template for a lifestyle to aspire to if there ever was one.

The daughter of the late David Hicks, the iconic English interior designer known for his graphic “vibrating” colors, as India calls them, she’s design royalty and of royal blood. Her maternal grandparents were the Earl and Countess Mountbatten of Burma, and India is the second cousin and goddaughter of Prince Charles, through whom she had her first brush with fame as a bridesmaid in his 1981 wedding to Lady Diana. “That’s me as her bridesmaid, hard at work,” says Hicks, looking through a brand book of photos. “The 25-foot train. Unheard of! And it was a nightmare!” But worth it.

Now she’s a minted expert in royal weddings: She’s producing and hosting a one-hour special on the nuptials of Prince William and Kate Middleton for TLC, scheduled to air on April 24, and will also be reporting live from the April 29 event for the U.K. television channel ITV.

If it weren’t for her candid, uncensored sense of humor, Hicks would be unbearably perfect. She and Flint Wood live full time in the Bahamas with their children — three boys and a girl, all with their mother’s golden hair and good looks. Hicks is a model, a longtime favorite of Ralph Lauren, and most recently Tod’s — she was the face of the house’s fall 2010 campaign. “I turned up on the set and they said, ‘You are the oldest model we have ever had,’” she says in a hilariously bad Italian accent. Yet, at 43, her natural beauty has not begun to fade.

Regardless, modeling has always been a part-time thing, with her focus belonging to her family, her Harbour Island store (the Sugar Mill Trading Company, which sells men’s and women’s clothes and gifts), producing design books, maintaining three guest houses on the island, and, for the last six years, acting as creative partner of Crabtree & Evelyn, where her contract has been extended for another three years.

Originally the jewelry collection was limited to Island Life, a collection that combines organic, island motifs with sterling silver and diamonds, until her father’s design legacy became a dominant force of the line. So now there’s also the 18-karat gold and sterling silver alphabet charm-based Initials lifted from the script on his writing paper, while Hicks on Hicks draws on some of his retro, geometric patterns incorporated into sterling silver, 18k gold and diamond medallions, cuffs and rings. All pieces retail from $200 to $6,000.

“It’s all derivative,” says Hicks. “It was kind of time to reclaim my father’s work. It hasn’t been said in jewelry and it hasn’t been said in the authentic way that I, as his daughter, can say.” That said, she has had to find the balance between her taste for the understated, if “in the way I dress — certainly not in the way I behave,” she says, and her father’s rather loud and distinctive style. She found the intersection of the two in the Bahamian estate, inspired by King Zoser, where she spent time as a child.

“Everybody else had a normal Caribbean home. We had to live in a f–king Egyptian mausoleum,” says Hicks. “But the point is that it was as modern and fresh then as it is today.”