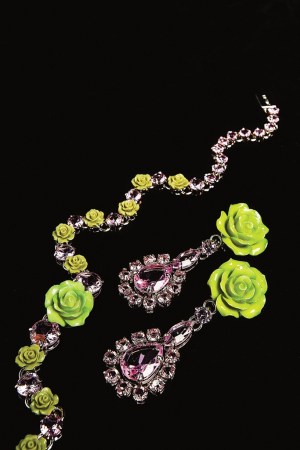 Jewelry is becoming an increasingly relevant vehicle for brand expansion and robust sales.

It is one of the fastest-growing categories, according to a recent study by Bain & Co. and the Italian luxury goods association Fondazione Altagamma. The research covered all categories of luxury—from cars, yachts and travel to furniture, wine and fashion.

Boosted by demand in emerging countries and restocking in established markets, sales of watches and jewelry picked up 18 percent in 2011, following a 23 percent increase in 2010, as more retailers are carrying this category.

With an ear to the ground, in fall 2011 Dolce & Gabbana and Salvatore Ferragamo launched jewelry collections, and Prada upped the ante on its capsule line, investing in a full-on advertising campaign specifically dedicated to this category.

Fine Italian craftsmanship and jewelry that strongly reflects the brands’ DNA are key elements in the launches of both the Ferragamo and Dolce & Gabbana collections.

“Design, strong identity, recognizable pieces and quality are the most appreciated elements,” says Ferruccio Ferragamo, chairman of the Florence-based family firm, which listed on the Milan Stock Exchange last summer. The collection, a rare category expansion for the house, is produced in collaboration with Gianni Bulgari, a member of the famous family of Roman jewelers who founded his own jewelry company, Enigma, in 1989. He spearheaded Bulgari’s international expansion in the Seventies and early Eighties.

Unveiled in September, the lineup includes rigid bracelets reproducing the house’s Thirties-era futurist logo and a silver cabochon ring inspired by the iconic Vara buckle. Ferragamo said the items that were most representative of the brand, featuring symbols associated with the house, such as the Gancio and the Vara, were the most successful ones.

“The content of creativity and design is strong, it is recognizable and inspired by our heritage. Those symbols were reinterpreted in a contemporary tone with new graphic designs,” Ferragamo says, noting that many pieces will be carried from season to season. “We very much believe in the potential of this category, and we have faith it will contribute to further strengthen our identity.”

He stressed that this is a “moment of great interest” in jewelry, which is highly representative of luxury. Retail prices range from 400 to 11,500 euros, or about $523 to $15,000 at current exchange.

Dolce & Gabbana’s first line of jewelry hit stores in November in Milan, Paris and London, followed by the U.S. in December. It is also highly identifiable with the brand’s iconography, rooted in Sicilian tradition. Crosses, black jade rosaries, delicate filigree ceramic images of the Virgin Mary and charms ranging from hearts to horseshoes are some of the standout elements. Precious materials include tricolor gold, rubies, sapphires and pearls. The jewels, Domenico Dolce said during the presentation of the line in September, “have an intimate feel—they almost look like you could have inherited them.” Retail prices range from $975 to $24,500.

Underscoring the relevance of this burgeoning category, Prada advanced the arrival of its spring jewelry in stores as the pieces hit shelves in November—in time to tap into the Christmas shopping season. Prada also recruited French actress Léa Seydoux to front the brand’s first ad campaign dedicated to jewelry.

Prada has delivered jewelry capsule collections periodically since 2003—each a reflection of the season’s ready-to-wear. For spring 2012, designer Miuccia Prada “wanted the collection to have a stronger impact,” says a spokesman, with its own campaign, photographed by Steven Meisel, with “an upcoming talented actress.”

For her latest capsule, Prada mixed and matched materials, including leather, crocodile and metallic studs, to deliver a wide offering of necklaces, bracelets, brooches and rings. The different styles span from a rock ’n’ roll glossy crocodile bracelet to opulent, sparkly pendants embellished with colored gems or resin roses.
Retail prices range from 350 euros (about $460) for a brooch to 1,850 euros ($2,420) for a necklace.