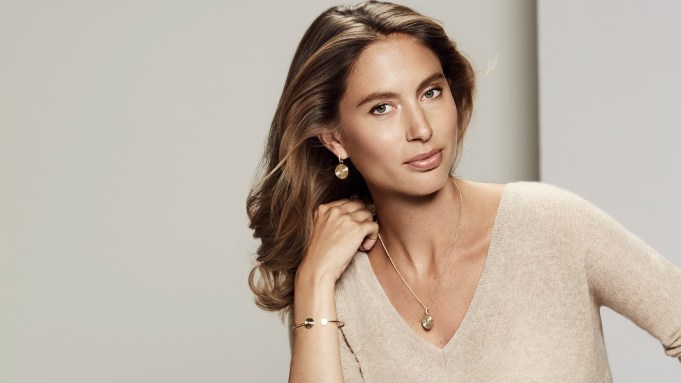 LONDON — British jewelry designer Kiki McDonough has revealed plans to expand in the U.S., and is aiming to open a store in New York, WWD has learned. The designer has also named the model-turned-celebrity caterer Jemima Jones as the first face of the brand.

The U.K. is McDonough’s largest market, followed by the U.S., where the brand is sold at Neiman Marcus. “Neiman Marcus sells the jewelry incredibly well online,” McDonough said. “They rang me up the other day to say we’re the biggest selling [jewelry brand] online for them. The next step is to get an outlet in New York, because Neiman Marcus isn’t in New York,” she said, adding that she already has clients in the city who want her to open there.

McDonough said that until now she’s been careful about expanding in America. “It’s a big market and a difficult one, so I’m very cautious and doing it very slowly. Our online business here is growing every month. A lot of Americans buy their jewelry online. I love that because it shows they’ve put their faith in me and trust me, they can’t see it and feel it but they trust the brand and they trust me, too. That’s a huge compliment.”

In England, the brand has one flagship in London and wholesale partners including Fortnum & Mason, Berry’s Jewellers in Leeds and Nottingham, Beards Jewellers in Cheltenham, and Lumbers in Leicester. Wholesale expansion has only just begun and McDonough said she is now focusing on opening more accounts both in the U.K. and globally.

While the designer did not disclose annual sales or profits, she said online now accounts for 25 percent of turnover.

McDonough said the 30-year-old jewelry brand has evolved slowly, “mainly because when I started I wanted to design jewelry for women to buy for themselves. But it was a very slow process persuading women to do that. The first six to eight years of the business were a real mission and hard work to get people to understand that it was fine to buy your own jewelry.”

McDonough then had children, and shifted the focus to them when they were young. “When my children went away to school I thought ‘Now’s the time.’”

The brand is a favorite of the British royals, in particular the Duchess of Cambridge, who has worn a range of pieces on numerous official engagements.

“The Princess of Wales coming to the shop for the first time was a highlight,” McDonough said. “Seeing the Duchess of York wear my earrings when she was engaged to Prince Andrew and the Duchess of Cambridge — those have been highlights,” said the designer, who also gets a buzz from writing invoices. “It means that someone has faith in what you’re doing” — and from customers coming up to her in the street to say: “Hi Kiki, I just wanted to tell you how much I love my earrings.”

McDonough has also changed her marketing strategy, selecting Jones as the face of the campaign, which will run in print and on the brand’s web site. Jones, a former model and now a celebrity caterer, is the younger sister of the artist and illustrator Quentin Jones.

McDonough selected Jones for the campaign as she felt she reflected the brand’s ethos and women could relate to her.

“For the last two or three years we’ve always photographed the jewelry flat and for the last year I thought it would be nice to have a model, a face,” McDonough said. “We have 50-, 60- and 21-year-olds. I actually know [Jemima] and bumped into her, and I was looking at her and thought, ‘This is the one.’ She’s a working mother and she’s not 18 or 16 — she’s in her late 20s. For me, she relates much more to the brand than some model.”

The campaign was shot by Elizabeth Gibson in a London studio. It shows Jones wearing bracelets, earrings and necklaces from McDonough’s new Fantasy line and the best-selling Apollo and Grace collections. She is also pictured in new, one-off pieces that are launching for Christmas. Known for incorporating colorful gemstones, McDonough infused bold hued stones such as lemon bell, morganite, green beryl, rubelite, kunzite, mandarin garnet and African tourmaline.

“I am always running from work to an event, then to see friends and family. I can wear her pieces everyday, all the time,” Jones said. Jones, who recently gave birth to her first child, a daughter named Eliza, said she will be back at work next year with plans to launch a new recipe book.