Jewelers Gear Up for Paris Biennale 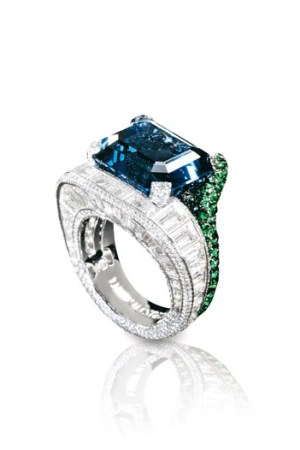 PARIS — When Damien Hirst created a life-size platinum skull encrusted with 8,601 diamonds and called it a work of art, he may have been on to something.

Jewelry houses here are encroaching on art’s territory as they set up shop at fine art fairs from Maastricht and Art Basel Miami to the Biennale des Antiquaires in Paris, which opens here Thursday.

Though houses from Cartier to Van Cleef & Arpels have been showing at such gatherings for years, the trend is gaining momentum. De Grisogono and Dior, with a lineup of rings designed to look like carnivorous flowers, are among the newcomers at the Biennale this year. Other houses are intensifying client public relations during the show. And most houses are creating lavish special collections.

Cartier, for instance, will unveil 60 high jewelry creations, including a bracelet of emerald beads with an organic Ceylon opal centerpiece and a restored choker that was once part of a necklace made for the Maharaja of Patiala in 1928.

Not to be outdone, Van Cleef & Arpels has invited 150 of its best clients for a fete at the Chateau de Groussay, the former residence of famous aesthete Charles de Beistegui, to lift the curtain on its 80-piece collection of high jewelry made especially for the Biennale.

Chanel, too, has an impressive lineup of baubles, as does de Grisogono, including a 6 million euro, or $8.8 million, ruby ring. Harry Winston also will show.

“We make art objects,” said Bernard Fornas, chief executive officer of Cartier International, which will host various private functions for clients the luxury firm has invited from around the world to attend the Biennale. “That’s why we have shown at the Biennale for years.

“There is a crossover in the clients for jewelry and art,” he continued. “People have seen incredible prices paid recently at auction for vintage jewelry.”

Executives said exhibiting at top-notch antique and art fairs is good for business. “The clientele at the Biennale is super,” said Benjamin Comar, international jewelry director at Chanel.

Typically collectors from around the world attend the fairs in an acquisitive mood — and they have money to spend. Fornas said Cartier sold almost every piece at the last Paris Biennale two years ago.

Comar said Chanel did “very well” at the last Biennale, which was the house’s first.

Business isn’t only counted in immediate receipts. Clients that don’t open their wallets often are groomed as potential future customers.

“It’s a great occasion to meet people who are passionate about art who can also be interested in our type of artistic creations,” said Stanislas de Quercize, chief executive officer of Van Cleef & Arpels. “The Biennale attracts people from around the world. It’s an opportunity for us to reveal our own patrimonial value.”

Brand names bring an extra cachet, a fact jewelers are cashing in on more often. Van Cleef, for example, now operates a store here where it only sells its vintage pieces, and Cartier has a full-time team devoted to buying back vintage baubles for restoration and eventual sale.

“Over the last years, the value of diamonds and gold has increased, which has not been the case for the stock market and real estate,” said de Quercize. “Most of the time, though, people still buy jewelry because they like it.”

What firms typically call high jewelry, or sparklers starting in the six figures and running into the millions, has enjoyed a boom in recent years thanks to new-wealth clients from Russia to the Middle East. Even the Chinese are showing interest in the most expensive — and rare — jewelry from top European houses. “We’ve seen more Chinese high jewelry customers,” said Fornas. “In general there is sustained demand for incredible pieces. We just had someone walk into our store in Los Angeles and buy a million-dollar piece. The person was a first-time client.”

Fornas added that over the last three years Cartier has doubled the size of its Paris high jewelry atelier to meet demand. “There are people with liquidity still,” he said. “Some people are making money on the high price of oil and raw materials.”

Fawaz Grousi, the owner of de Grisogono, said his sales of high-priced pieces have increased by double digits so far this year. “There is no sign of a slowdown,” he said. “It’s good but it can drive me crazy because we can’t meet demand.”

Prices of high jewelry continue to head north, with an increase in average prices of as much as 30 percent over the last two years, according to executives.

Quercize said the profile of the typical high jewelry customer has changed in recent years, growing younger and more adventurous in taste, mirroring the new geography of wealth around the world.

“People want the extraordinary,” added Fornas. “If you’ve got money, isn’t that what you want?”