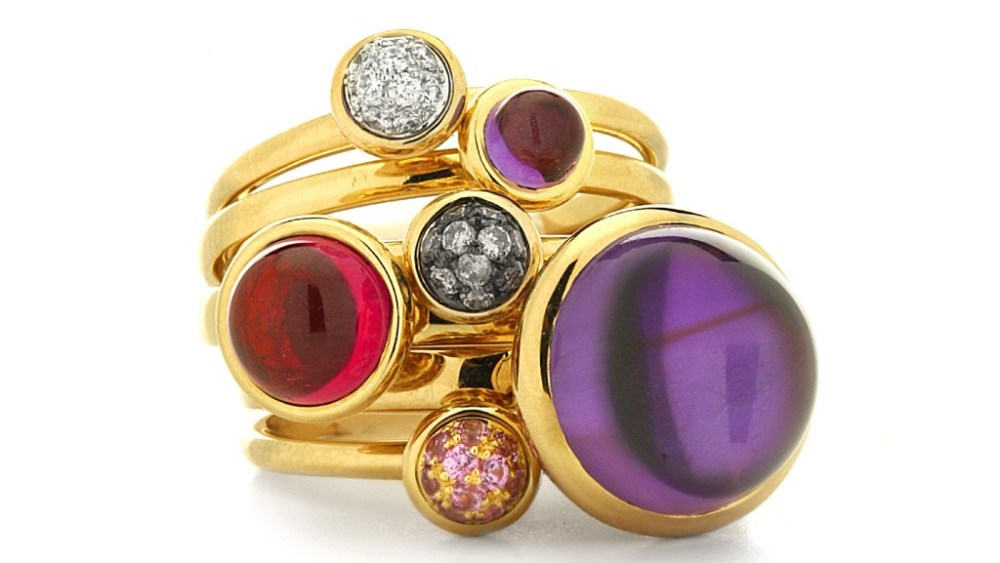 NEW YORK — Jewelers are putting their faith in color, craftsmanship and versatility in order to draw in value-hungry consumers.

In tough economic times, shoppers who are able to spend on jewelry are flocking to scoop up unique baubles made with quality materials such as 18-karat gold, platinum, diamonds, rubies, emeralds and sapphires. While jewelry as an investment is not new, brands exhibiting at JA and JCK’s Luxury Privé here last week said there’s an increased demand for jewelry that provides both quality and a unique design aesthetic.

That duality has never been more in demand than at the high end, where one-of-a-kind pieces are selling fast. Moderately-priced baubles, however, are a bit harder to move, as that consumer is more price-sensitive.

At JA, which took place at the Jacob K. Javits Convention Center from July 29 to 31, jewelers focused on stackable rings, bracelets and necklaces in order to give the consumer a sense of value.

At Gumuchian, a family-run fine-jewelry brand, gold and diamond stack bands that retail from $1,500 up to $84,000 are one of the more popular items. For those with a bigger budget, the brand’s $84,000, 18-karat white gold and diamond detachable necklace, featuring three strands of round-, princess- and baguette-cut diamonds, also allows the consumer to transform her look.

“Interchangeable is a very big hit,” said co-owner Myriam Gumuchian. “You get more bang for your buck.”

For the brand, which manufactures its jewelry in New York and sources its diamonds in Antwerp, Belgium — punching up classic designs with such versatility is its mantra.

Namrata Kothari, designer and vice president of Syma, a Fort Lee, N.J.-based brand that sources its vibrant hand-cut stones in India, noted retailers are looking for something that conveys value to the consumers.

“Retailers are looking for accessible price points,” Kothari said, explaining that jewelry for less than $2,000 is ordered most frequently, even though her brand makes product priced at upward of $10,000.

Stackable bangles with sapphire, moonstone and quartz, as well as rings and pendants with large amethysts and blue topaz are selling well.

In order to keep prices down, Kothari will intersperse champagne and black diamonds into her jewelry instead of more expensive white diamonds.

“It’s fine jewelry but it’s also fashion,” she said. “You can dress it up and there’s a lot of color.”

Held at the Pierre Hotel from July 30 to Aug. 1, Luxury Privé also drew a number of jewelers looking to distinguish themselves through intricate designs and rare stones.

Goshwara, which sources stones mainly from Africa, designs its jewelry, which ranges in price from a few thousand dollars up to $500,000, around the stones.

“Education about stones is important for the consumer,” said spokeswoman Filecellia Sampson. “Some people ask if it’s glass. It’s important to know the origins of the stones and how difficult it is to find tanzanite or Ethiopian opals.”

Oscar Heyman, which is celebrating its 100th anniversary this year, primarily uses pink, yellow, blue and white diamonds, as well as rubies, sapphires and emeralds. Occasionally, the brand will use fire opals, black opals, coral and other semiprecious stones to complement its 18-karat gold and platinum designs.

“We want to create jewelry of lasting value,” said jeweler Tom Heyman, who showed off a pair of what he called “invisible” ruby earrings that retail for $68,000. Bordered by round white diamonds, the raspberry-colored rubies, of which there are 56, reside in a cluster without any metal visibly holding it together.

“This is an extremely difficult technique,” he said, as he pointed to a complex one-of-a-kind bracelet in which diamonds, rubies, sapphires, emeralds and onyx display the image of birds in flight.

“I want our jewelry to be passed down a family,” Heyman said, while flipping the $550,000 bird bracelet upside down to show the platinum latticework that holds the jewels together. “I want the kids to fight over who will inherit it.”

While most families won’t be able to afford such a piece, the point is that consumers are looking for something a little different.

New to the U.S. market, Lebanese-born Nada Ghazal, whose brand Nada G. made its debut a few months ago, echoed that sentiment. With her edgy designs that include an 18-karat gold skeletal ring filled with diamonds and rubies, and a ring featuring an 18-karat gold lizard with diamonds set on a rough tourmaline, Ghazal said she is one of the first jewelers in Lebanon to usher in less classical designs.

“I wanted to connect with other women through my jewelry,” she said. “People seem to be buying more jewelry than they used to. It’s not just an investment anymore, and it’s more than an accessory. Jewelry can change an outfit and truly make a statement.”