High-jewelry houses used their couture week presentations as an opportunity to provide the shaken city with a positive energy. 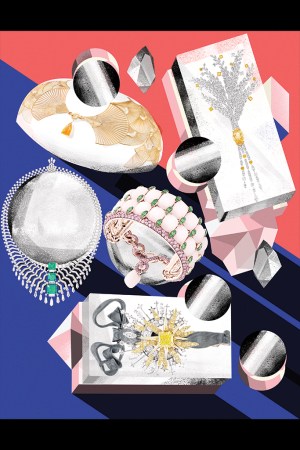 Jewelers turned to the vocabulary of positive thinking as they unveiled their high-end collections during Paris Couture Week, in a season marked by continued volatility and the absence of most major houses from the upcoming Biennale des Antiquaires, traditionally the industry’s top showcase.

Light, prosperity and joy were among the keywords, with no fewer than three Place Vendôme houses — Boucheron, Chanel and Chaumet — showing designs inspired by wheat, symbolic of wealth, renewal and luck.

“Unconsciously, Place Vendôme must have been invoking the return to good fortune,” said Hélène Poulit-Duquesne, chief executive officer of Boucheron. “Since the terrorist attacks, traffic on Place Vendôme has fallen sharply and Paris hotels have had extremely low occupancy rates, so it’s difficult. A lot of tourists are avoiding Paris in favor of Geneva or London.”

Chanel sponsored an installation by French artist Gad Weil, who planted gilded wheat ears on Place Vendôme to coincide with the presentation of its collection, Les Blés de Chanel. The 62 pieces were displayed in the Coco Chanel Suite at the recently reopened Ritz Paris hotel, framed by fragrant bundles of wheat.

Highlights included the Fête des Moissons necklace, featuring intertwined wheat ears set with more than 1,200 diamonds, around a 25-carat fancy intense yellow diamond in an octagonal cut inspired by Place Vendôme. The piece required more than 1,000 hours of work and carried a price tag of $3.73 million before tax.

“Wheat is very important in our culture,” said Benjamin Comar, international director of Chanel Fine Jewelry. “We really like the idea of talisman products that give you strength for the adventure of life, and wheat represents prosperity. I think for Gabrielle Chanel, it was also a reminder of her countryside roots.”

The timing of Chanel’s public art takeover ruffled feathers at the Comité Vendôme, which groups 109 members, but Comar said the initiative was intended to celebrate the revival of the square. “It’s not just for us,” he insisted. “This is also a gift to Parisians and tourists. I think Paris really needs positive things right now.”

Chaumet has been incorporating wheat ears into its designs since 1811, when they featured on a tiara the house created for Empress Marie-Louise, Napoléon’s second wife. Its 65-piece collection, La Nature de Chaumet, was divided into four themes — wheat, laurel, oak and lilies — harking back to classical mythology.

Styles ranged from a classic diamond wheat ear brooch to brightly colored pieces like the Passion Incarnat tiara, with flowers set with red spinels, rhodolite garnets, green tourmalines and diamonds. The blooms detached to be worn as brooches, while the larger one doubled as a pendant.

Boucheron opted for a performance devised by fashion curator Olivier Saillard to show its 26 Vendôme line, named for its historic flagship address. Four models of different ages struck sensual poses with partners as they displayed the jewels to guests including Charlotte Rampling, Isabelle Huppert, Julie Gayet and Laetitia Casta.

A case in point was the capelet worn by Saskia de Brauw, worth around 600,000 euros, or $662,750 at current exchange. Made of cutout gold plates and set with a 81.61-carat citrine, it featured articulated shoulders that could only be appreciated in motion. Ears of wheat appeared on a necklace in Boucheron’s signature question-mark style, among other items.

Boucheron was the last of the Place Vendôme houses to pull out of this year’s edition of the Biennale in September after organizers decided to raise prices and reduce the space allocated to jewelers, leading to a mass defection. Only four will now attend: De Grisogono, Cindy Chao, Nirav Modi and Boghossian Jewels.

Dominique Chevalier, president of the National Union of Antiques Dealers, which organizes the Biennale, stood by its decision to scale back the presence of jewelers and said he was disappointed that many had pulled out.

“We need and we want high jewelry, obviously. We have never said otherwise. But simply, we want to have it in the correct proportion,” he said. “Somewhere along the line, I think we did not communicate quite as we should have.”

The organizers have invited the Fondation de la Haute Horlogerie to stage an exhibition illustrating the history of watchmaking at the Biennale, which they hope will act as a bridge toward a future partnership with jewelers.

Philippe Léopold-Metzger, ceo of Piaget, was among those open to discussions. “If the organizers are smart, yes, why not? It’s a fantastic showcase for us. It was a little bit sad not to have it done the way it used to be done and should have been done, so we’ll see,” he said.

Still, he was doubtful about plans to turn the Biennale into an annual event. “It was great to do it every two years. You know, you’re not going to run the Olympics every year, and I think there were a number of decisions that were not the best decisions that could have been made,” he added.

Piaget launched its 150-piece collection, Sunny Side of Life, with a dinner in Paris attended by brand ambassador Jessica Chastain. Based on the idea of radiance, the designs combined gold — hammered, mesh-woven or engraved in the brand’s signature Palace decor — with precious stones like emeralds, sapphires and yellow diamonds.

Metzger said Piaget had worked on acquiring better-quality stones with the aim of attracting top-end buyers. “Obviously, they also have an investment eye when they choose, the same way as when they buy art,” he noted.

Diamond specialist De Beers bucked industry convention by offering its customers lower-priced alternatives. While its London collection paid homage to the city with sets incorporating colorless diamonds in the D to F range, it also presented lower-graded — i.e., lightly colored — stones, including a 14.28-carat cushion-cut X VS2 diamond on a platinum ring.

Holding up two diamonds of similar size but slightly different color and clarity, François Delage, ceo of De Beers Diamond Jewellers, noted: “You are looking at a ratio of one to four in terms of budget.” In this case, $300,000 versus $1.2 million.

He denied the initiative was prompted by recent market volatility, saying it was all about offering choices. “Frankly, over the last few years, we and our customers have become used to living in a highly volatile world. There isn’t a month, a week, that goes by without some huge news on the geopolitical or economic front that has a structural impact on market conditions,” he said.

Nonetheless, the London-based jeweler hiked its prices in the U.K. by 4 percent in the immediate aftermath of Britain’s vote to leave the European Union, which sent the pound plunging to a 30-year low, and Delage said another increase of similar proportions is in the pipeline.

Tiffany & Co.’s 2016 Masterpieces Collection ranged from classic diamond sets inspired by Audrey Hepburn to disco-flavored Prism pendants and rings, as well as re-editions of vintage pieces designed by Jean Schlumberger in the Fifties.

Victoire de Castellane looked even further into the past with her Dior à Versailles collection, inspired by the royal palace’s interior design elements, including chandeliers, feathers, sculpted ribbons and woodwork. She showed the elaborate pieces, many of which were set in oxidized silver, under flickering lights designed to mimic candles.

If the opulence of the creations contrasted with the bucolic motifs shown elsewhere, she took it in stride. “You cannot erase the past because times are difficult. That’s life. Otherwise you just stop creating and dreaming,” the designer said.

Cartier used more color in its Magicien group. “We play with symmetry and reflections that allude to kinetic art,” said Pierre Rainero, its image, style and heritage director. “This is a creative vein we have explored for several years. We have done it a lot in black and white, whereas here we are in a more organic, unexpected register.”

Light was also at the heart of Pierre Hardy’s latest high-jewelry creations for Hermès, presented alongside gold and silver jewelry under the title Continuum. The Ombres et Lumière set featured a necklace, bracelet and double ring made of pink gold set with diamonds and a subtle dégradé of gray Tahiti pearls with white Akoya and South Sea pearls.

Louis Vuitton worked contrasting materials such as spinel and moonstone into its Blossom line, inspired by its signature four-petalled monogram flower. Anchoring the 60-piece collection were seven necklaces boasting large center stones, including a 53.01-carat black opal or a 29.75-carat tsavorite originating from a recently discovered mine in Merelani, Tanzania.

De Grisogono, which plans to open another Paris store this year, showed 20 new pieces including a pink gold cuff set with 26 pink opals, 99 tsavorites and 738 pink sapphires. Also on display was the diamond-and-sapphire necklace, worth 1.65 million euros, or $1.83 million, worn by Bella Hadid on the red carpet at the Cannes Film Festival.

Bulgari’s collection, The Magnificent Inspirations, featured 70 pieces influenced by its Roman heritage, with prices running up to several million euros. They included stylized variations on its signature Serpenti styles, such as the Serpenti Seduttori snake-head earrings in pink gold set with diamonds, amethysts and emeralds for the eyes.

Jean-Christophe Babin, ceo of Bulgari, said clearly identifiable designs lend the pieces a sense of history. “You have to love at first sight, but also you need, I think, this kind of reassurance that the brand standing behind that creativity is a brand with a long tradition,” he explained.

“Oddly, I’m not sure that high jewelry is really suffering from the uncertain environment, in the sense that it really attracts people who are very knowledgeable not only about today’s value, but about tomorrow’s value,” Babin continued. “But obviously, it has to be high jewelry — unique pieces, like art, with a value potential over time.”