With auction houses Bonhams, Phillips de Pury and Sotheby’s holding their own New York-based jewelry auctions in the coming week, some jewelry dealers have begun to reevaluate their lots’ reserve prices in the face of growing global financial uncertainty. 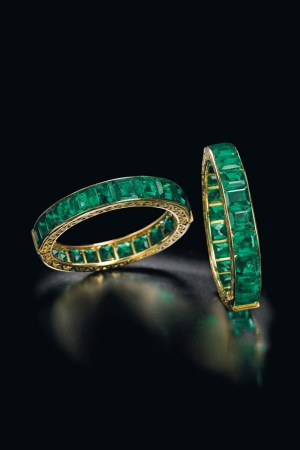 Jewelry-auction season is now under way in New York.

The numbers reflect increasingly cautious consumer behavior, according to sources — which might be in reaction to a rapidly slowing euro, as well as a suite of other global shifts.

“The market is a little more cautious, a little more calm, you have to make sure you are offering what the market is in the mood for,” said Rahul Kadakia, Christie’s international head of jewelry. “Stones with prices that are not in line with the market will not sell as high. Even though the market was in a good spot [for Tuesday’s sale], it’s not showing the buoyancy that we saw a few years ago.”

With auction houses Bonhams, Phillips de Pury and Sotheby’s holding their own New York-based jewelry auctions in the coming week, some jewelry dealers have begun to reevaluate their lots’ reserve prices in the face of growing global financial uncertainty.

Susan Abeles, Bonhams’ U.S. head of jewelry, who helped prepare the auction house’s fine jewelry sale for Wednesday said, “The really fine pieces, the beautiful rare pieces still command great value. It’s the remainder of the market, beautiful pieces but not as fine, that are not commanding as large a price.”

She estimated that quality, unsigned lots have lost between 20 and 25 percent of their value within the last few months. Colored stones, Abeles said, are fetching all-time high prices, but the cost of white diamonds has stabilized.

“Our Russian and our Asian buyers definitely seem quieter — those were the two strongest, growing markets in our industry and we have seen the buyer power modify,” Abeles noted. “What’s causing this exact change, I’m not sure, but it’s definitely politically and financially related.”

“We do feel concern, we are a global community, even though sitting in the U.S. the value of the euro definitely affects us,” she added.

Kadakia has noticed similar shifts among Christie’s buyers, but did not attribute the dip to a plummeting euro. One of Tuesday’s top-10 buyers — a European — spent $2 million for a ruby originally estimated at $700,000, he noted.

“I think it has to do with the general market, I don’t think the euro issue has much to do with it. You see stocks more calm, oil is down. That affects Middle East buyers.

“The Middle East is down, Russia is a bit on the quiet side, Asia is doing well but is also being selective with their buys,” Kadakia said.

Kadakia noted that the magnitude of wealth that comes through Christie’s doors is not indicative of the average consumer’s behavior during global currency shifts, making the slowdown less drastic for jewelry auctioneers.

“We are dealing with an area of the market where our average price point is $250,000. We are dealing with a different area of clientele. Yes, it makes a difference when you are buying a $10 million diamond and your holdings are in euro, but I would say everything is pretty fluid for them, honestly,” he said.

Sotheby’s international managing director of jewelry and watches, Daryl Wickstrom — who is preparing the auction house’s New York Magnificent Jewels sale for April 21 — concurred. “Obviously I am going to think in a different way if I’m a euro-based person who is considering a weekend in New York, but a lot of our clients are really in a different wealth universe.

“We find most of our clients to be what we’d describe as ‘globally wealthy,’ they are not necessarily focused on day-to-day movements in terms of FX [foreign exchange] rates,” he said.

Wickstrom did note, though, that Sotheby’s Russian clientele has perhaps wavered a bit. “There are a lot of things going on in Russia at the moment. We still have some active Russian participation in our sales,” he said.

For Wickstrom, the key to success even amid cautious times, is that “great jewelry always sells if great jewelry is properly estimated.”

Kadakia feels similarly at Christie’s. “Currency has nothing to do with it. It has to do with quality. If something is intelligently priced, it will sell no matter what.”