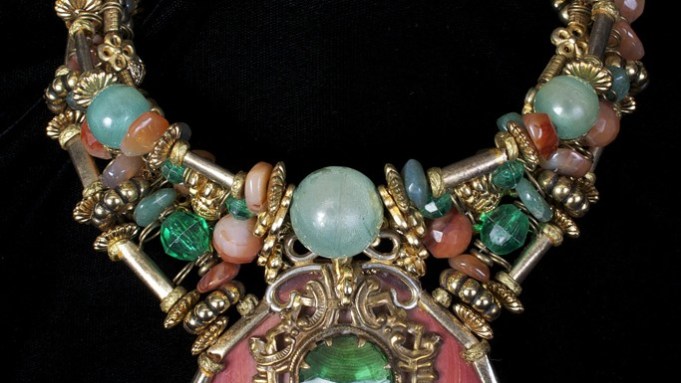 Jewelry designer Arthur Koby has had an unusual career, with several unexpected twists. He created accessories for Geoffrey Beene’s runway in the Eighties, and the same pieces appeared on Beene’s runway and that of Oscar de la Renta each season for years (a fact known to de la Renta but not to Beene). Singer Lauryn Hill wore his I Ching necklace, with its four coins, on the cover of Time magazine in February 1999. Gloria Vanderbilt owns one of his pieces. And now Kent State University has given him a retrospective, which will open today, called, “Arthur Koby: The Creative Eye,” which features 50 of his works. Thirty came from one of his top collectors, 12 from another and the others from a variety of sources.

Koby, who was born in Brooklyn and studied architecture at Cooper Union, spent 10 years as an architect working for a small firm. As a sideline, he opened a gift shop. Jewelry was among the items sold there, but its profit margin wasn’t very good, so Koby decided to start designing and making it himself.

“It started out as a complete fluke,” he recalls. It was the hippie period, so he created some necklaces out of African trade beads, and they sold. Beene saw them and “freaked out over my work,” Koby says. “I met up with him, and he gave me three weeks to create a collection. I just scoured the market for components, and I did it.” Beene talked up his creations to everyone he met, and soon his line was in stores such as Saks Fifth Avenue. “It was overwhelming,” Koby says. The designer uses lacquered wood, crystals, scallop shells, resin, stone beads, drawer hinges, buffalo horn and other materials. He says he buys as many milagros — the representation of a hand or leg that is put on an altar in Mexico to heal an illness— as he can. He saw an elaborate chandelier in a shop, and immediately started breaking it down into components in his mind. Since he is self-taught, he has created most of his own techniques, and prides himself on the fact that his big, flamboyant necklaces are never heavy. “I’ve never had a complaint,” he says.