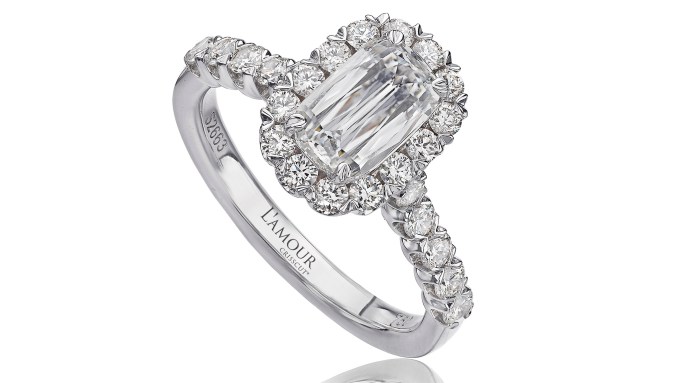 The annual JCK trade show at Las Vegas’ Mandalay Bay Resort and Casino will provide the jewelry industry with the chance to undergo a self-review, as diamond sales and in-store purchases either remain flat or continue to decrease.

Brands report that attendance at March’s Baselworld fair in Basel, Switzerland, was down compared to last year. U.S. retailers instead chose to save their travel budgets for the Las Vegas show, making JCK a crucial opportunity to ramp up Stateside business.

This will happen as retail performance — particularly for the diamond market — continues to prove challenging, brands say. Last month, De Beers reported its diamond sales tallied $520 million for the fourth sales cycle of the year, compared with last year’s sales in the same period, at $636 million.

“We’ve heard some retailers weren’t going to spend money on sending the buying team to Basel and had planned to wait for JCK, or to come to New York. I think retail is very tight and a lot of retailers are assessing where they spend money. If they see watches somewhere else, not at Basel, what are they going to do? I think retailers are thinking differently,” said Ellen Seckler, vice president of marketing for Citizen Watch.

The show this year will occur midweek, from June 5 to June 8, rather than on the weekend to accommodate the Jewish holiday of Shavuot. Some sources feel that the weekday schedule could prove more successful for JCK, reducing the show’s costs and drawing retailers during less prime business days. “It’s in the middle of the week, which is viewed in a much more positive light by retailers, who feel they don’t miss out on the days of being front and center of customers. This could be the way of the future,” Seckler said.

Tacori’s senior vice president of marketing Michelle Adorjan said: “I think in the way that retail has fundamentally changed, buyers buy products in a fundamentally different way. I don’t know that people need to go to major trade shows in the same way they used to.” Tacori will use JCK as an opportunity to show its new Crescent Cove fashion collection, which was inspired by the California coastline.

Brands including Citizen and Bulova will show the same designs that were unveiled at Basel, but because of fluctuations in attendance, many JCK retailers will be seeing these products for the first time.

Christopher Designs founder Christopher Slowinski said his fellow diamond dealers have noted a 25 to 30 percent decrease in sales in the last three years.

Slowinski intends to significantly expand the offering of this diamond cut at JCK with the introduction of new shapes, including a pear silhouette. He said the stone cut has helped him increase his business by 30 percent. “If I didn’t have it, my business would be 30 percent below,” the jeweler said.

Slowinski mulled the many difficulties facing the diamond industry today, saying: “The competition from genetic stones is too high and the Internet, I think, is creating too much competition with retailers. Retailers are looking at profits and margins and some are not even interested to buy diamonds anymore because they cannot make any profit. I think the consumption of diamonds went down in general and I think, maybe because of the competition of the Internet or the online stores of big retailers like Blue Nile, other retailers cannot make a profit margin on diamonds — this is a huge problem for the diamond business.”

With challenges mounting in the diamond industry, seven of the world’s largest diamond mines banded together in 2015 to create the Diamond Producers Association, or DPA. The group this year intends to have a strong presence at JCK, to provide retailers and vendors with support and solutions.

“JCK is an important time for the DPA to check in with the industry and let them know we have launched our campaign and undertaken a number of important initiatives. Retailers in particular are eager to hear how we will refresh the diamond narrative, targeted at Gen Y consumers,” said DPA chief marketing officer Deborah Marquardt.

The DPA will sponsor a breakfast during the show and hopes to convey that, “it’s really just begun. We are at the beginning of a journey and our initiatives. The campaign measurements are showing that our messaging is resonating with high salience. Awareness is growing, so all our indicators are positive. It’s not just about paid media, though — it’s a strategic holistic communication strategy to tell a new diamond narrative to a generation that hasn’t been spoken to in a way that’s reflective of their life stages and their priorities. It’s been a great, strong beginning that we intend to mature and refine,” Marquardt added.

JCK’s industry vice president Katie Dominesey said the political climate has leeched a sense of uncertainty onto the market. “Since the election, there is a hesitation and caution in the market. International business, I can’t really attribute to the election but more to the strength of the dollar. It’s more expensive [to travel here] for international parties,” she said.

Dominesey has noticed a decrease in lower-level, assistant buyers on JCK’s attendance roster this year. “The industry as a whole has changed a lot — they are trying to get ahead and be smarter,” she said. This year, JCK has established a bespoke itinerary service to help visitors plan out their days.

The show this year expects about 2,100 exhibitors. Two new “neighborhoods” have been added to the show’s floor plan — including a section devoted to experience as well as one dedicated to security, run by the Jewelers’ Security Alliance.

“It’s about identifying and providing security solutions — it can’t just be product-based anymore. We have to provide retail solutions as well,” Dominesey said.

In 2019, the show will return to the Sands resort. “We are very excited for our return back to the Sands in 2019,” Dominesey said. “There’s been some great improvements to the facilities, but JCK has changed since we were last at the Sands in 2010. So we will make sure that we are merchandising the show floor in neighborhoods so it is easy to shop, and [we’ll] make sure that we are continuing to add vendors that are in high demand. We are methodically thinking about every element; and as we have known about it for a year and still have two years — we want to make sure it’s right.”