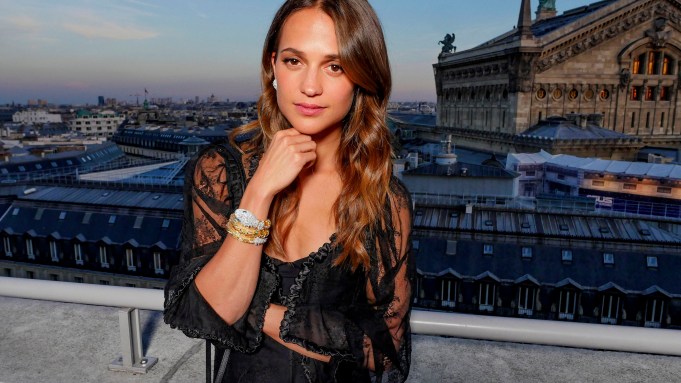 PARIS — Could the current global women’s movement be wielding its influence on Place Vendôme? “Oui” was the consensus for a number of high jewelry players presenting during the just wrapped Paris Couture Week here. They were placing a stronger focus on wearability and broader price spectrums catering to the growing trend of women buying pieces for themselves.

Among key executive changes in the sector, Marianne Etchebarne, the newly appointed global head of watches and fine jewelry product, marketing, clients and communication at Chanel, was on hand for the presentation of the house’s delightful Flying Cloud collection. Etchebarne succeeded Benjamin Comar, who has been tapped as chief executive officer of Repossi, in which LVMH Moët Hennessy Louis Vuitton owns a non-controlling stake.

Chopard’s Caroline Scheufele, meanwhile, who showcased a special high jewelry collection in collaboration with Chinese couturier Guo Pei, disclosed that Jean-Baptiste Maillard, managing director of Chopard UK, is due to take up the reins as “big boss” of the United States. “Lots of changes will be happening in America,” she predicted.

As the troubled watch market shows signs of recovery, the fine jewelry sector is being sustained by “a huge wave of female power,” confirmed Jean-Bernard Forot, director of marketing for jewelry and watches at Piaget. Global sales of branded jewelry, which represents around 15 percent of the jewelry market, in 2016 increased by 10 percent to 15 percent year-over-year, he said.

“Today, you have more and more middle class ladies who enjoy purchasing jewelry for themselves, and they don’t need an occasion to buy. They can be lawyers or working in real estate, they can be based in Dubai or Shanghai, London or the United States. It’s something that is happening worldwide,” he said.

The recently released “Wonder Woman” blockbuster has driven demand for cuffs, an item historically associated with Piaget. Sales of the house’s Possession line, which includes bangles fitted with a flexible system that allows the wearer to put them on without help, are also strong, he said, adding that 70 percent of revenues from the collection are generated from female customers buying for themselves.

Taiwanese designer Cindy Chao, whose line included a lightweight diamond-encrusted titanium feather brooch, said the shift has been taking place over slightly more than a decade. When she founded her business, which currently has factories in Geneva, Paris and Lyon, female clients were spending between $35,000 and $50,000 on their own for a piece of jewelry. Now they’re going up to half a million, she said.

“My client is growing up with me,” she added, noting that eight out of 10 clients purchase her jewelry without consulting their husbands. Thirteen years ago, only two out of 10 were in a position to do so, said the designer, who has just opened a new showroom in Taipei.

Bulgari ceo Jean Christophe Babin said the LVMH-owned, Rome-based jeweler is also increasingly courting independent women — “ladies who want to enjoy themselves, buying with their money for themselves,” he said, sipping rose Champagne on the rooftop of Galeries Lafayette at a cocktail feting the brand’s pop-up on the ground floor below. There, display windows were filled with handbags, jewelry and fake popcorn stands.

The aim, he said, is to widen, but not to render more accessible, the brand’s appeal while maintaining exclusivity through its prices. “Think about it: Five years ago a jeweler would never have done windows or an event like this,” he said, as brand ambassador Alicia Vikander glided by.

François Delage, ceo of De Beers, which in 2014 commissioned Mary McCartney to shoot the first “Moments in Light” series celebrating creative female talents, said that “what has really changed for me is the way [women buying for themselves] is now more accepted, how the media features it, and this creates a formidable new perception.”

Fan Bingbing road-tested one of the creations from De Beers’ new Lotus collection at a cocktail in her honor, held on the rooftop of the Automobile Club de France with views across Paris. Other highlights included a necklace that can be worn in three ways, with an abstract lotus motif ending in a magnificent 18-carat rough diamond evoking a drop of water.

Among other highlights of the week, Dior Joaillerie’s Victoire de Castellane unveiled the second installation of her three-part Versailles-inspired storyline, “Versailles, act II,” this time centered on the palace’s gardens. The designer said she wanted to explore the “paradoxical combining of nature and culture” characteristic of the work of French landscape architect André Le Nôtre. Particularly magical was a bracelet inspired by one of the site’s fountains combining multicolored swirls, tiny flowers carved from turquoise, lacquered tendrils and a large golden shell embellished with dot diamonds.

Geneva-based De Grisogono unveiled its first bridal line, Ultimate Bridal. Future brides can choose the necklace made exclusively with diamonds or opt for a version lined with sapphires.

Louis Vuitton — which last year presented its Blossom high jewelry collection based on monogram flower motifs, and two years prior to that, the Acte V collection based on V motifs — this season joined the two themes on six suites. The masterpiece was the Conquêtes necklace with a coat of arms-style motif and range of fiery opals, ending with a rare peach-tone 37.07-carat imperial topaz.

Repossi artistic director Gaia Repossi chose the Picasso museum for her presentation of creations in the house’s signature pink gold with different colored diamonds, including punk and tribal-inspired designs.

Color and versatility were main themes across the collections, with white gold, diamonds and lightweight platinum among the key materials, and transformable pieces the new normal.

“Wearability is in our roots. It was jewelry to wear not to be kept in a safe, not as an investment,” said Chanel Joaillerie’s Etchebarne of the company’s original 1932 collection. Eye-catchers from the new line, inspired by life at sea, included supple rope motif necklaces, precious spins on the sailor tattoo and a capsule of five limited-edition rings in motifs inspired by “the view from the deck,” including a sun and seagull and a tiny reproduction of the Duke of Westminster’s yacht, the Flying Cloud.

“What interests me is wearability. I have designed for the industry for years, and what I like and need is seeing people actually wearing my pieces. We’re designing pieces that are slightly more wearable because times are not easy, and people can feel intimidated,” echoed industry veteran Giampiero Bodino, who has been group art director for Compagnie Financière Richemont since 2002.

Highlights from the latest collection from his namesake brand, Mediterranea, included the multicolored Tesori del Mare shell bracelet with curved and concave discs in different materials, including tiny fine pearls and titanium “to enhance the color of the stones.”

Chopard, as part of its collection for Pei, presented a set made with bright, raspberry-colored aluminum, a material already used in its watches and one that allows for the integration of a rainbow spectrum of colors.

Boucheron’s creative director Claire Choisne, who spent two weeks in Russia two years ago, looked to re-create a special patina evoking wood aged by the elements that she saw there. “It was almost silver, worn by time, rain and wind; we tried to reproduce it,” she said of the finish, which was featured on a pair of teardrop-shaped earrings with a matching ring. The collection was presented in a faux snowy setting, with wind howling and wolves playing in the background.

Setting an Italian Renaissance mood, meanwhile, Mellerio dits Meller’s fledgling artistic director Laure-Isabelle Mellerio looked to the Isola Madre island on Lake Maggiore in the north of Italy where the Mellerios liked to vacation for her second high jewelry collection for the house. The colorful line included the designer’s first ring, made from pink gold to evoke the island’s special golden light, and set with a greeny-blue tourmaline edged with guilloche enamel to evoke waves, and colored garnets, sapphires and tsavorites nodding to the island’s lush gardens.

With brands increasingly broadening their price points, David Yurman unveiled an haute version of its Stax line, marking a significant shift into the high jewelry domain under Evan Yurman, the brand’s chief design director for men’s, women’s and high jewelry. “The world is changing and luxury is changing, so when we look at the industry it’s either going very high end or mass,” said Vincent Guy Raffin, the brand’s vice president of high jewelry.

The plan, he said, is to “launch a high jewelry collection with big center stones at high price points” in 2019 as part of an international push. The brand is also mulling opening a store in Paris. “We wanted to do it slowly, year by year, to introduce coherent collections and recruit from within our existing clientele the high jewelry spenders,” he said.

Piaget, which is also looking to gain space in the high jewelry sector, presented a blue sapphire ring priced at around $9 million.

While many of the rising brands, including Messika, are targeting the United States, Buccellati, which was recently acquired by the Chinese conglomerate Gangtai Group, figures among brands eyeing the East. “It’s a new challenge; it’s an adventure,” said codesigner Lucrezia Buccellati Wildenstein of the Chinese market, where the brand plans to open dozens of new stores. The Buccellati family will be able to retain shares in the company “as long as we want,” she said, adding that the Chinese group plans to retain production in Italy. The Gangtai Group is buying an 85 percent stake that will be gradually increased, she explained.

The upcoming edition of the Biennale des Antiquaires is looking decidedly light in terms of jewelry participants, meanwhile, following an exodus of jewelers protesting against a reported disagreement with organizers over the cost and space allotted to their sector.

De Grisogono and Cindy Chao confirmed they will not be participating in the next show, set to run Sept. 11 to 17 at the Grand Palais. They were two of the 14 brands that participated in the last edition. This year, only five are confirmed: Boghossian, Nirav Modi, Epoque Fine Jewels, HD Rare and Unique, and Bernard Bouisset.

Watch: WWD Goes Behind the Scenes at Chanel Couture