The next big self-purchase trend will destigmatize one of jewelry's most socially coded categories.

The jewelry industry’s reliance on the world’s wealthy has forced its hand in adapting to many new social codes: shifting wealth demographics, indifferent Millennials, delayed engagements and widespread casualization in fashion.

One of the biggest changes the industry has capitalized on is the rise of women purchasing jewelry for themselves, which has grown to represent up to half of global jewelry sales, according to De Beers, altering the way jewelry is consumed. While the industry now relies on self-purchase to remain afloat, one holdout style had been too mired in social coding to whet women’s appetites — but now that has begun changing, too.

Diamond rings — the stalwart symbol of love and commitment — are becoming an increasingly popular choice among women purchasing jewelry for themselves.

Attracted to their status, design and investment, women are favoring highly stylized rings that prominently feature diamonds. Big jewelry houses, retailers and designers are tailoring their assortments to get ahead of the trend.

“It’s a bit of a liberation in terms of what works for them, what’s acceptable for them and what they are comfortable with. Married or not, women are buying diamond rings for themselves now without limitations,” said Daphne Lingon, Christie’s head of jewelry for the Americas. 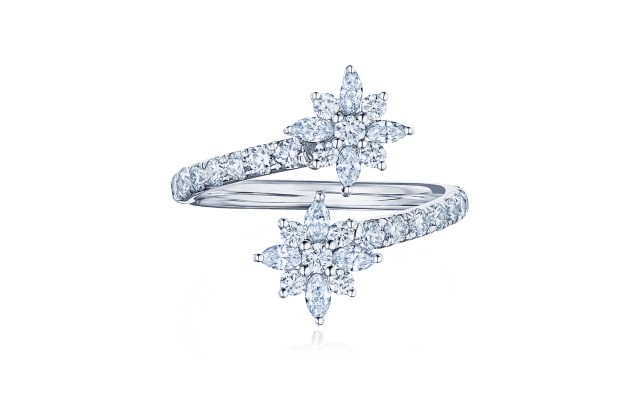 In observing self-purchase sales, retailers feel that the designs women choose for themselves are wholly different from those a man would purchase as a gift. They report that gifted purchases are either simpler or more ostentatious than the design-driven, detailed styles preferred by women.

“A man is playing it a little safer, whereas a woman just falls in love with something,” said Lauren Santo Domingo, cofounder of Moda Operandi.

“Back in the day, men would buy their wife or girlfriend jewelry so it would look as expensive as possible. I think now people are much more drawn to something a little less in-your-face,” designer Irene Neuwirth told WWD. “My client is a woman really expressing herself through jewelry. It’s such a personal thing, I think men need a little reprogramming when they are buying fine jewelry, not just looking for things covered in diamonds and emeralds.”

This attitude has carried over to self-purchased diamond rings as well, with designers now creating product that appeals to these more personal-leaning instincts. “I think what happened is that diamonds were typically set on an engagement ring without much emphasis on design; there was an emphasis on the cut, color and clarity. Now we are seeing a lot of designers setting diamonds in really cool ways. Outside of engagement, women are gravitating toward them,” said Santo Domingo, who called out jewelers including Jessica McCormack, Taffin, Glenn Spiro and Fernando Jorge for creating such styles. 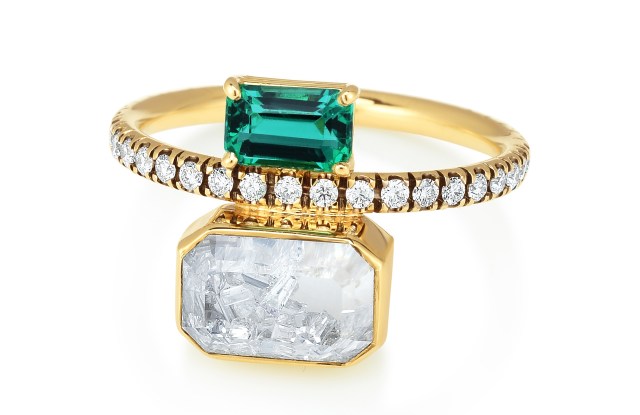 “From a year ago, we saw an opportunity at the store for clients looking for diamond rings and extended the selection,” said Barneys New York fashion director Marina Larroude. “If you have a look at the assortment, we have special and unique rings that don’t look like engagement rings. A diamond is a girl’s best friend — why do you need to wait for an engagement to wear a cocktail diamond ring or an eternity band?”

Larroude has in fact purchased a diamond ring for herself, saying: “I didn’t feel like my husband had to give it to me. I think women are more empowered in their life and choices and shopping behaviors.” She pointed to designs by Ana Khouri and Retrouvaí as jewelers that fulfill the needs of a new diamond consumer.

Millennials delaying marriage and the changing nature of engagement rings have helped contribute to the diamond ring’s liberation from the bridal category. Couples are increasingly splitting the cost of engagement rings, often seeking alternative styles that have loosened preconceptions of what ceremonial jewelry ought to look like.

“The one thing that held as something a man bought for a woman was the bridal category — if you buy your own engagement ring you might question why you are getting engaged in the first place. I think even that now has become a blurred line, it’s not the same as it was with getting on one knee with the box,” said jeweler Stephen Webster, who says that self-purchase represents more than 50 percent of his sales. 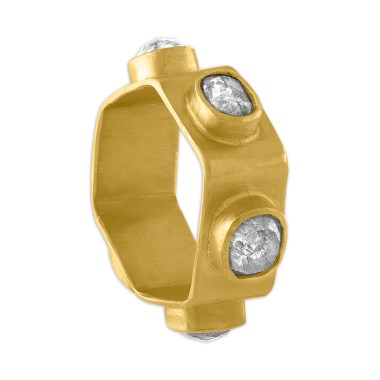 “Once people start putting diamonds on other fingers, it’s more like an earring — something to craft your own look,” Webster added of the diamond ring styles he sells to women.

“Fifteen years ago, women getting married or engaged wanted a traditional ring and then we saw the trend turning into a vintage piece, then yellow gold and that has played a lot into this situation, people were more playful with engagement rings and then it escalated,” Larroude said of the shift.

Greg Kwiat, chief executive officer of Kwiat and Fred Leighton, has seen the emergence of self-purchased diamond rings with both brands, noting that “the big thing is that the style needs to feel more modern and less like an engagement ring. We have been doing a lot of interesting rings featuring center stones but in different settings — either with the stone in an east-west direction or in a bezel that is a little more contemporary and not the classic prong set.”

Designers have become sensitive to this shift in jewelry norms. In Las Vegas this week, Jean Prounis will introduce a new collection that she has named “Vow,” in an attempt to neutralize consumer opinion toward gold and diamond bands.

”I didn’t want to stigmatize it for wedding purposes; I wanted to push on the idea that it’s potentially for self-purchase. A vow could be a vow you make for yourself, for wellness, confidence or self-care,” said the designer. 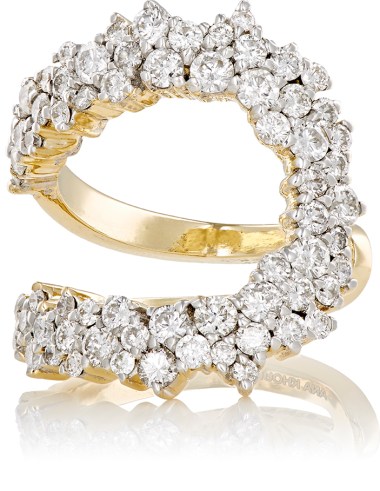 “Rings are something you look at every day while interacting with your hands; you see your fingers constantly, so I feel like rings are one of the stronger visuals in jewelry,” Prounis added. “I do find it hard to design with a solitaire outside of an engagement ring, so I have a variety of diamond options that are designed with shapes in mind. I gravitate toward using antique diamonds that are not run-of-the mill princess cuts.”

Big jewelry houses are tapping into the trend as well. Earlier this month, Bulgari hosted a pop-up shop in New York dedicated to its B.zero 1 proprietary ring design. Bulgari North America president Daniel Paltridge said the house’s emphasis on the style, this year marking its 20th anniversary, was partially owed to the growing importance of self-purchase. “Marriage and engagements are happening less, and when people get married the significance of the ring is going down as well,” Paltridge said.

“It opens a new chapter for why people buy jewelry and the notion of self-purchase is more important. It’s something we are pushing a lot more. If you are buying something for yourself, it’s more to do with your style and wearability rather than what you think someone should buy for you, for an engagement or wedding or whatever,” he added.

Earlier this month, De Beers’ jewelry division introduced the Horizon style — a simple triple-band design with a central diamond-set helix that twists around for a fidgety fixation. “It’s a universal design that is fun and destigmatizing,” said Francois Delage, ceo of De Beers Jewellers. “It’s the idea of ‘I celebrate myself, I buy my own ring to mark my own achievement.’”

Delage said that when briefing his design team on the ring, he requested a style “to wear with jeans and a T-shirt to the market on Saturday, to wear in the evening for a cocktail or while traveling and always keep it on the finger. It’s something that becomes a part of you.”

The style was intentionally priced for self-purchase, ranging from $3,200 to $5,500. “If you think of what I could call adjacent products like bags, shoes or a dress, I wanted to make sure that our ring stands its ground and can compete with one of these other accessories,” Delage said.

“This is just one more illustration of how our world is evolving — as a brand we have to stay true to the art, but at the same time provide the client with what they need,” added Delage. “It’s about expertise meeting emotion.”