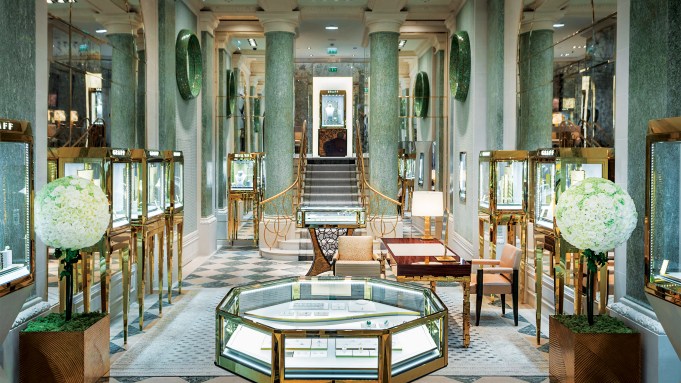 It seems not a month goes by in Paris without another jewelry store opening.

This rapid expansion is taking place against the backdrop of a global slowdown in luxury sales, with Paris particularly hard-hit as visitor numbers have fallen in the wake of terrorist attacks, high-profile strikes and the city’s wettest spring in 150 years.

Global luxury-jewelry sales are expected to post a compound annual growth rate of 3.1 percent between 2015 and 2020, down from 3.8 percent between 2010 and 2015, according to the latest forecast from market research firm Euromonitor International.

Johanna Kolerski-Bezerra, lead analyst for beauty and fashion at Euromonitor, said it has revised its forecast downward for France and will likely do so again this year.

“In France, 2016 is a catastrophic year,” she said. “French people are down in the dumps and there are fewer tourists coming to do their luxury shopping.”

Yet despite the challenges, few leading jewelry brands can afford to not have a presence in the French capital.

François Graff, chief executive officer of Graff, said it has long been on the lookout for the right location for its first French store. “When we received a phone call about the opportunity for a Graff boutique on Place Vendôme, it took just a few minutes to say yes,” he said. “Place Vendôme is one of the most famous jewelry destinations in the world.”

To mark the opening of the boutique, designed by Peter Marino in the style of an 18th-century French palace, the London-based jeweler unveiled a 105.07-carat D flawless pear-shaped diamond it christened the Graff Vendôme. A second Paris location is planned for 2017.

Toshikazu Tajima, president and ceo of Tasaki, said having its first European store at the Ritz was a strategic move as the brand, known for its pearl and diamond jewelry, seeks to grow its business outside of Asia.

“In Paris, you have twice-a-year prêt-à-porter collections and haute couture collections, all the top journalists gathered — and not just journalists, the heads of the department store chains from the States and elsewhere, so we could have a good presentation to those people four times a year, which is very strong,” he explained. “We could also have good access to top-end potential consumers from the world, which will make it easy for us to go into various markets in the future.”

The Japanese jeweler has launched a Ritz Paris par Tasaki high-jewelry line, which is sold exclusively at the Paris hotel and at its Ginza flagship in Tokyo.

Nourah AlFaisal had planned to open the first boutique for her high-jewelry brand Nuun in her native Saudi Arabia, but similarly seized the opportunity when a space became available on Rue du Faubourg Saint-Honoré, across the road from the Bristol hotel. She does not see the competition as a negative.

“The more, the merrier. I think we all inspire each other,” she said. “In design in general, I think it’s fantastic to have a general feeling of a Renaissance.”

The designer has introduced her first lower-priced collection, T, to broaden her customer base. “Anyone in any kind of industry, especially the luxury industry, must be a bit worried. But I’m very optimistic. I think people always want to celebrate life, and so they’ll always want jewelry,” she reasoned.

Nathalie Remy, a partner at McKinsey & Co. leading its fashion, beauty and luxury practice for the Europe, Middle East and Africa regions, noted that jewelry is outperforming the watch segment, which has been heavily hit by a government anticorruption campaign in China, a strong Swiss franc and a host of other factors.

“Jewelry is an offer-driven market. People invest in a ring in the same way they do in a painting or car,” she said. “The offer has been very strong and it explains this large growth differential. I don’t see it running out of steam. On the contrary, given the rather disappointing performance of watches, I see many players reinvesting a lot of effort and energy into nourishing this second pillar.”

McKinsey expects branded jewelry to account for 30 to 40 percent of overall jewelry sales in 2020, up from 20 percent in 2014. It believes leading brands will focus on opening their own stores, as it gives them more control over their brands, closer contact with consumers and higher margin potential.

Remy nonetheless believes the slew of openings in Paris should be put into perspective. “I think it’s a coincidence. I wouldn’t go so far as to say there’s a jewelry bubble in Paris,” she said, noting that with French customers spending steadily less on luxury goods, the stores were aimed mainly at raising visibility and serving an international clientele. “The challenge some of our clients face today is that there’s a lot of volatility and it’s hard to predict the flows and revenues of a point of sale, because purchases are sporadic and traffic is low, even though the average basket is very high.”

She recommended that brands envision physical locations as part of an “ecosystem” that includes a strong Web presence designed to draw traffic into stores and establish a dialogue with customers. “The point of sale is only an entry point. For a meaningful purchase like jewelry, there are many points of contact,” Remy noted.

Eric Briones, director of strategic planning at advertising agency Publicis Et Nous and author of “Generation Y and Luxury,” said this holds particularly true for Millennials, who are revolutionizing the traditional codes of the luxury sector. “The old luxury approach doesn’t work. You have to come across as an attractive and welcoming community. When you cross the threshold of a high-jewelry store, you enter a world that is overwhelming, whereas Millennials fundamentally demand participatory luxury experiences, in the sense that they want to be treated as an equal.”

Briones recommended making the interior design of the store light and welcoming, and hiring sales associates that Millennials view less as authorities, and more as peers and influencers. He also suggested using pop-up stores, whether physical or online, to capture new customers.

“You have to leave Place Vendôme to find them, knowing that they are not necessarily in the traditional jewelry haunts. In short, when you go to Place Vendôme, you don’t see a swarm of Millennials,” he remarked.

This generation of jewelry buyers is already giving rise to innovative new retail models. A case in point is French brand Gemmyo, which began five years ago as an online retailer and opened a physical showroom in Paris last year.

“We did it in response to demand from our customers,” said Pauline Laigneau, cofounder and chief marketing officer of Gemmyo. “Most of them were telling us the jewelry looked so much better in real life than on the site, but there were also many others who didn’t feel comfortable ordering items without trying them on, even though we offer free returns.”

Gemmyo ships worldwide, and once even sent an engagement ring to a scientist stationed in the Antarctic, Laigneau said. “We are trying to get used to the fact that today, people have very different paths to purchase,” she said, adding that the brand expects to open more showrooms in France.

Meanwhile, diamond certification authority HRD Antwerp has partnered with Galeries du Diamant to open its first certified flagship in Paris. The clinically white space allows customers to select their own diamond and have it mounted on a standard 18-karat white gold ring within a couple of hours.

The idea is especially popular with tourists — most of them Chinese — who make up 80 percent of the store’s customers, according to owner Charles Ziegler. “The concept is gaining acceptance. The Internet helps us, too, because it’s making diamonds better known, which means people are much more selective,” he said.

Peter Macken, ceo of HRD Antwerp, said the idea of the flagship was to educate people about diamonds.

“We wanted to do it in Paris because this is such a renowned place for diamonds and jewelry and luxury,” he said. “For tourists who come to visit Paris, [especially] Chinese or Americans, the fact that we are from Antwerp and we are part of a longtime diamond heritage there is also very important.”

Benjamin Comar, international director of Chanel Fine Jewelry, said the influx of entrants was testimony to the lasting appeal of Paris as the epicenter of fine jewelry.

“The segment is flourishing,” he said. “In my opinion, the difficulties that Paris is experiencing are temporary. Paris will always remain the city of luxury.

“I think it’s a good thing that jewelry stores are opening. It’s a very dynamic market, and it’s dynamic because there is demand. People are drawn to what is dynamic, and it makes it challenging. It pushes us to produce increasingly creative and different pieces. Competition is healthy.”