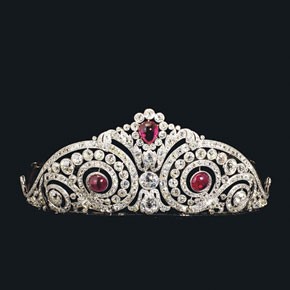 London’s Victoria & Albert Museum is opening a more luxurious backdrop for its treasure trove of jewels.

On Thursday, the museum will unveil its William and Judith Bollinger Jewellery Gallery, a two-story space designed by Eva Jiricna with matte black floors, curved glass cabinets, which run down its center, and a glass spiral staircase that links the ground and mezzanine levels.

The gallery spotlights around 3,500 pieces of jewelry, many from the museum’s existing collection. The jewelry has been curated to span the history of European adornment, from deep yellow Etruscan gold neck pieces from the sixth century B.C. and delicate diamond brooches from the 18th century to the graphic jewelry made from materials such as plastic and pebbles , which came into vogue in the Sixties.

“Every different period has its own style — it’s always a mix of social history, fashion and what materials are available,” said Beatriz Chadour-Sampson, consultant curator for the gallery.

The gallery’s revamp is a result of a gift of $13.6 million from William Bollinger.

Several of the gallery’s major pieces stand out for their historical significance as much as their sparkling stones. One of the pieces on display is a heavily detailed emerald and diamond necklace, with matching emerald and diamond teardrop earrings, called the Beauharnais Emeralds, which Emperor Napoleon and his wife, Josephine, gave to their adopted daughter, Stephanie de Beauharnais, when she married the Grand Duke of Baden in 1806.

“I often think, if [the jewelry] could only speak,” said Chadour-Sampson. “It’s adornment, but it’s also for enjoyment.”

Several of the museum’s standout pieces, including jewelry produced by Cartier and Chaumet, are displayed in the gallery’s central cabinets so visitors can see the jewels from all angles. They include two Cartier diamond tiaras from the early 20th century, one of which was made for Consuelo, Duchess of Manchester, formerly Consuelo Yznaga. There’s also a chunky Chaumet platinum cuff, set with rubies and diamonds in a graphic, geometric pattern that the museum estimates dates from the mid-Thirties to mid-Forties.

While the jewelry from the present day may not be quite as glittering as the most opulent pieces in the collection, such as a necklace made from papier-mâché newspaper by Robert Ebendorf from 1985, Chadour-Sampson said they are no less precious.

“[Sometimes] it’s about the design, not the material,” said Chadour-Sampson. “After the second half of the 20th century, anybody could wear anything.”