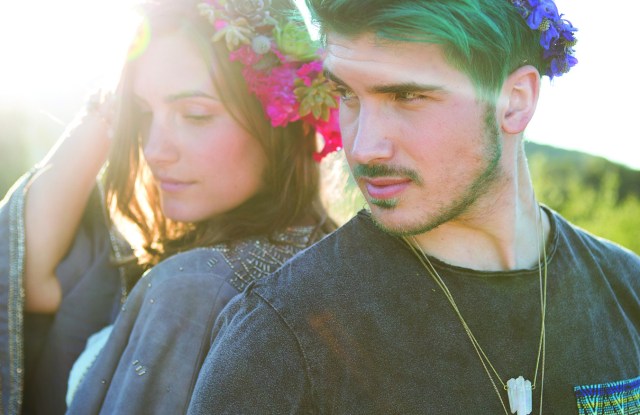 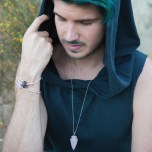 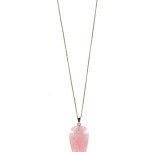 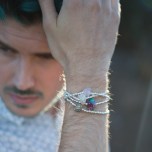 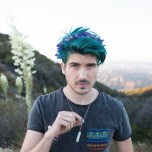 YouTube personality and vlogger Joey Graceffa has mastered the art of multitasking. With a new show called “Escape the Night” just launching on YouTube Red, the 25-year-old Internet star recently introduced a line of jewelry called Crystal Wolf, aimed at his legion of fans and crystal lovers alike.

The star first fell in love with the glittering stones about a year ago, during a trip to New Mexico. As he entered a store, “my head just about exploded — there were so many crystals everywhere!” Moving beyond their shiny appeal, he started studying the different healing-, energy- and health-oriented properties traditionally associated with crystals.

His web site, which launched June 21, dispenses Graceffa’s knowledge of various stones and their powers. He is especially fond of rose quartz, thought to bring love (including love of self) into one’s life. In fact, his first collection features a rose-quartz arrowhead, based on a piece he owns in titanium quartz.

The most challenging aspect of all this? Getting it to, well, crystallize. “I had the idea for a while, but like most things in life, the hardest part is just doing it,” he told WWD at a YouTube video taping. “No one is going to be more passionate than you. I had to keep constantly pushing to make it happen.”

He worked with a design team in Los Angeles to help him turn his jewelry ideas into actual designs, taking inspiration from his personal collection of crystal pieces. The new line focuses on pendant necklaces, but also offers one choker on a velvet ribbon, druzy stud earrings and a bracelet. The vlogger said he would like to include more bracelets, and rings as well, into the future collections he hopes to introduce seasonally — even monthly. His crystal aesthetic also carries over into iPhone cases and stick-on nail art, available through the Crystal Wolf web site. Ranging from $14.99 to $19.99, the pieces are comfortably priced — presumably to make them affordable for Graceffa’s young fan base.