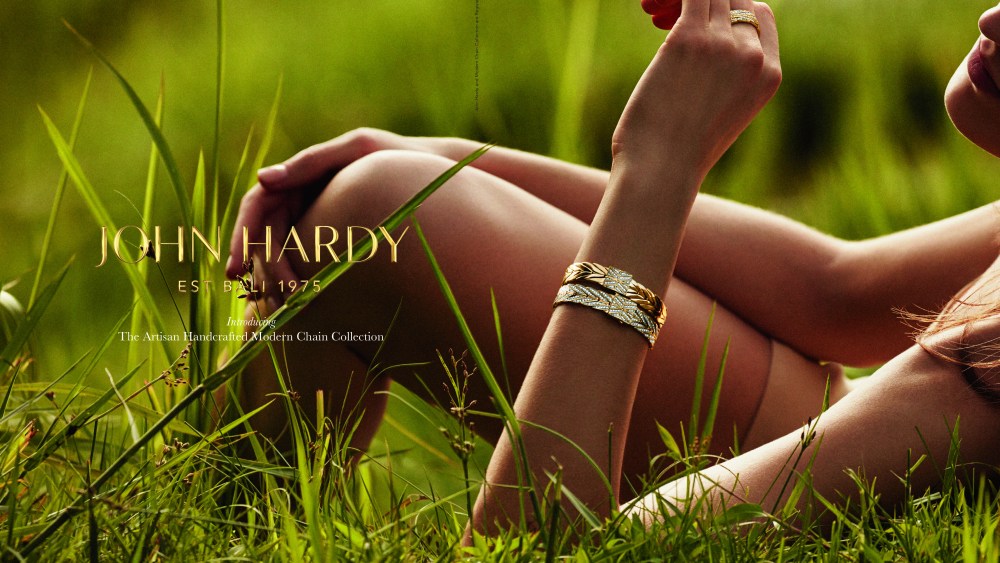 The Bali-based brand’s Modern Chain campaign unveils a new franchise for the brand: stackable bangles, necklaces and rings in a woven braid motif. It is the brand’s first new core product line to be introduced in over two years.

Women’s designs will retail from $250 for a silver ring to $20,500 for a gold and diamond bracelet. Men’s pricing extends from $995 for a slim silver bracelet to $2,995 for a bracelet with more heft and a diamond clasp. They will be introduced at retail today.

The brand says that only three of its 700-some artisans are capable of weaving the Modern Chain men’s collection, due to the physical strength required for the manufacturing process.

Ads will make their debut in September issues of select fashion, luxury, travel and men’s publications, as well as on billboards.

Modern Chain represents a changing face for John Hardy, which hired De Beers whiz kid Hollie Bonneville Barden as creative director in May to bring an updated panache to the brand.

Barden’s designs have yet to make their debut.

The brand will make its foray into privately operated U.S. retail this fall by opening stores in Houston and New York. A third U.S. store, in a yet-to-be-determined location, will open in early 2017.

In New York, John Hardy will open in SoHo at 118 Prince Street. The 1,200-square-foot space will open in November.