The handcrafted Balinese jewelry brand has changed direction in the last five years while maintaining the DNA set by founders John and Cynthia Hardy.

John Hardy, the luxury jewelry brand known for its Balinese designs using sustainable materials, has gone through a transformation over the past five years.

In 2014, the brand, founded by John Hardy and his wife Cynthia, was acquired by U.S. private equity firm Catterton Partners (now called L Catterton), which put in place a plan to transform the house — primarily known as a maker of bracelets and silver — from a contemporary brand sold through department stores and some of its own stores into a luxury jewelry house with a global omnichannel reach.

“It was a brand that had essentially not delivered any transformation in performance from the prerecession period from 2008 through to 2014,” said Robert Hanson, who post-acquisition was brought in by Catterton as John Hardy’s chief executive officer to reinvent the company’s strategy. As reported, Hanson recently has transitioned to the role of non-executive chairman of the board, with Kareem Gahed, who previously served as chief revenue officer, assuming the role of Hardy’s ceo.

“It wasn’t like we acquired an asset that had a few things that needed to be tweaked,” Hanson said of the early days of his tenure, adding that absolutely everything in the company needed to be touched “in order for the brand to compete as a modern artisan handcrafted luxury jeweler.”

In recent years, the luxury jewelry space has become highly competitive. No more are customers buying pieces for special occasions only; in fact, today’s consumers, most often women, are buying for themselves and wearing pieces made from precious stones and metals in their day-to-day lives. On the retail front, the stigma of buying high-priced pieces online has faded and both major brands and retailers must have established presences in e-commerce.

Under Hanson’s watch, the John Hardy brand’s DNA was redefined by adding Hollie Bonneville Barden, formerly of De Beers, as creative director. “She modernized the collections from top to bottom,” Hanson explained, setting the tonal expression creatively for how the core collections — Classic Chain, Dot, Naga and Bamboo — “would evolve moving forward.”

While Barden has honed the design point of view, the price structure was maintained, with Gahed saying the goal is to provide a well-balanced pricing architecture with a range of entry-level-through-pinnacle price points.

Previously the brand’s sales were primarily through wholesale channels. But that, too, has been reorganized, and while the company still has the same number of partners as it did in 2014, the brand has 10 to 15 percent fewer doors “in an effort to be more impactful,” the executive explained.

A major focus was expanding the company’s direct-to-consumer channels, Gahed said, especially with boutiques that help “translate a physical expression of the workshop in Bali that embodies the brand at the highest level, directly to the customer.”

Hardy opened its first U.S. store in 2016 in Houston, and has continued to substantially grow its brick-and-mortar footprint, with six full-price stores now in the U.S., three off-price units and six international locations. More are in the works, with a full price pop-up shop at K11 in Hong Kong to open this fall, and an off-price location opening at Sawgrass Mills in Sunrise, Fla., in December.

“We want to be able to elevate the expression and experience of the brand through our strong partnerships that we have, while also driving growth with our own new channels,” Gahed said of the strategy.

Along with reshaping its distribution channels to compete in the fine-jewelry space, the brand also pivoted with a new digital-first strategy.

Johnhardy.com was reimagined, with Gahed explaining, “We are seeing the fruit of the focus with the performance of year-over-year growth rate of low double-digits and we think there are still additional opportunities.”

Gahed said 30 to 35 percent of the total turnover of the company includes e-commerce, North America retail stores and the brand’s international boutiques, all of which it owns and operates.

The goal, he said, is to continue to evolve the business to be a balanced composition of about a 40 to 45 percent split between its direct-to-consumer and international businesses, while continuing its wholesale partnerships.

“We were disciplined enough to define what was authentic about the brand then modernize it,” Hanson said of the transformation. “And [we] put forward an understandable point of view that gave our core customer a new reason to engage with the brand, but broadened the aperture of the brand with collections that would appeal to a new jewelry consumer, as well.”

The brand has seen the demographic of its customer widen. At its core she is still an affluent Baby Boomer, but a new customer, skewing about 10 years younger, has discovered the brand. “[The new customer] is gravitating toward smaller gauges of our modernized heritage, classic chains, bamboo collection, the Naga Dragon collection,” the ceo said.

“Over the last few months we’ve been able to unify our global database, and it allows us to shape and personalize an omichannel journey that engages our audience throughout each step,” said Gahed of the brand’s customer data, adding, “We think that is a key result of the overall growth we are seeing.”

The recently launched Lahar collection, developed by Bonneville Barden and priced from $695 to $25,000, is one example of how the house is developing ideas to speak to its new clients. The collection of rings, necklaces and cuff bracelets uses wild diamonds, cut in a variety of unique shapes and focuses on each stone’s individual inclusions set in sterling silver and 18-karat gold. 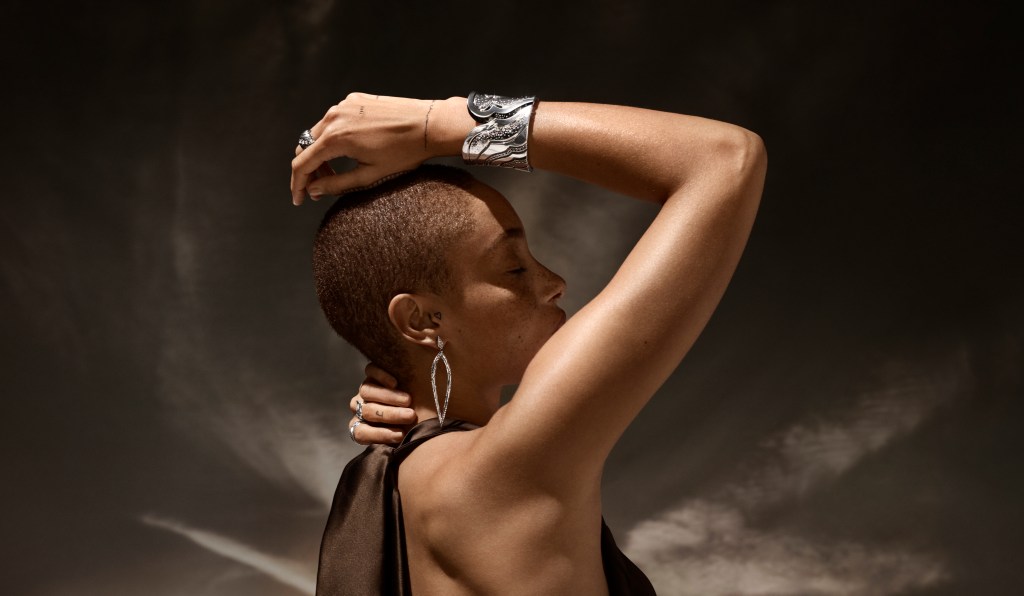 For the brand’s fall campaign, Penélope Cruz and Adwoa Aboah each wear pieces from the new offering.

Cruz became a brand ambassador at the beginning of 2019, taking part in the ongoing Made for Legends campaign, a creative platform launched in 2017 with Julianne Moore and Aboah, which helped elevate John Hardy’s marketing to a global scale.

The men’s category has begun to also drive new business.

“It’s a very interesting category for us,” Gahed said, adding that the brand has seen strong double-digit growth in the men’s category over the past three to four years.

“There has been an appetite of male shoppers who are more comfortable wearing jewelry,” Gahed said. “Globally we’ve naturally seen that, but in the U.S., I don’t think you’ve seen that till the last few years.

“In terms of our direct-to-consumer channels and our digital business globally, the penetration of men’s is higher than the balance of the business,” the ceo said.

Seeing the trend take shape early on, the brand has dedicated design and merchandising capabilities under a chief merchant specifically for the men’s category.

Sustainability is a hot topic in the jewelry market and it has historically been a core part of the John Hardy business and brand story. Hardy uses reclaimed gold and silver as well as ethically vetted stones, but the philosophy is also “integrated into the construction and operation of our workshop in Bali and boutiques,” Gahed noted.

The brand’s sustainability commitment extends through its “Wear Bamboo, Plant Bamboo” initiative, where the company plants a number of seedlings in Indonesia for each purchase of a piece from its Bamboo Collection. “Through this program we provide local communities with training on the benefits of growing bamboo and correct bamboo forestry, which we further evolved through our partnership with nonprofit 1,000 Bamboo Villages to ensure that these communities are able to build a sustainable, profitable future through bamboo cultivation and harvesting,” Gahed said.

“All of this helps set John Hardy apart from the competition,” he said — the overall goal of the strategy put into place following Catterton’s acquisition of the brand.

“It was a highly transformational and dynamic challenge; it’s rare that you have to come in and either build or rebuild,” Hanson said of the brand’s evolution. “We have really put a strong emphasis on becoming a jeweler, from being an opening-price-point silversmith that made bracelets and generally was direct price promoted in North America through wholesale, to becoming a high-quality luxury jeweler brand that works to develop compelling product for women and men.”