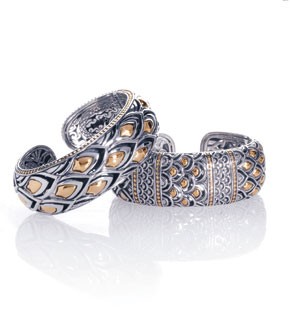 John Hardy, the Bali, Indonesia-based jewelry brand, plans to open as many as four flagships in the next five years, relaunch a high jewelry component and gain market share in the competitive fine jewelry arena.

Now that the dust seems to have settled, the 20-year-old company is focused on growth.

Dernoncourt said retail sales hit $160 million last year and he wants to reach $190 million by the end of the year. Seventy-five percent of sales come from the U.S., Canada and the Caribbean. The goal in the next five to 10 years is to have half of John Hardy’s total sales come from the U.S., with the rest from other regions, including Europe, the Middle East and Asia.

As for expansion outside the U.S., the brand has a limited retail presence in Europe and Asia, which so far has happened organically. But executives are getting more aggressive about it.

“Not much has changed [since Hardy’s departure], but it’s definitely a new era,” said Dernoncourt, now the ceo. “For us, it’s like a family business, with a new generation taking over. We are very close with John and spend some time with him when he is not traveling.”

Dernoncourt has reorganized the company’s categories. Hardy will relaunch its Cinta collection, which John Hardy launched as an ode to his wife, Cynthia. The edited collection of one-of-a-kind pieces incorporates gold, rare colored stones, including paraiba tourmalines, and indigenous Balinese materials like shells, into items such as cuffs and brooches. The line represents the pinnacle of design and technical ability at Hardy.

Bedarida, a native Parisian who has been the designer of John Hardy since 1999, learned the craft of jewelry making from the most venerable jewelers, including Van Cleef & Arpels in Place Vendôme. Jewelry in the Cinta range is extremely limited. There might be as many as three pieces of a particular style, and prices will be in the neighborhood of $150,000. Chinese dragons inspire the new collection, called Naga, which is to debut at Couture.

The next level will offer more affordable jewelry inspired by the high jewelry collection. Pieces in this line will also be limited edition.

The last and largest product segment is the core silver line, which can include gemstones such as sapphires and tourmalines. Hardy is known for its metalwork, as with its Kali collection, which is inspired by smooth river rocks, and the Palu collection that incorporates hammered and braided metal.

Bedarida described the John Hardy woman as “authentic, a woman who enjoys life and travel. A real woman.” He should know, because in the past six months he and Dernoncourt have traveled to some 80 distribution points in the U.S., from independent stores to Saks Fifth Avenue, Neiman Marcus and Bloomingdale’s, to meet customers.

“John Hardy jewelry has a distinctive Balinese style,” said Scott Erdman, vice president and divisional merchandise manager of fine jewelry and watches at Saks, which carries the brand in all its doors. “The designs of the collections are different, yet possess a recognizable brand DNA which appeals to our customers. Over the past couple of seasons, Guy has taken the collection in new, exciting directions which have been very positive for our business.”

“There is definitely a slowdown,” he said. “The customers and retailers are expressing their concern. We are having growth at the moment, but it’s week by week. It’s a good time to gain market share, a good time to invest….We have a very aggressive growth plan. We are still growing, but not as much as we expected. The next 18 to 21 months are not about aggressive growth, it’s about market share.”

As such, Hardy is focused on doing many personal appearances, trunk shows and marketing events. The Hardy team is also working on training its sales representatives and perfecting merchandising. Bedarida and Dernoncourt are known for inviting good customers to stay with them in Bali and see how the jewelry is made.

John Hardy plans to launch as many as four flagship locations by 2013 in locales such as New York, Las Vegas and Miami. Dernoncourt said the firm isn’t keen on having a large network of stores, and the flagships are meant to bolster the Hardy brand within existing retail outlets.

“We want the store to be an experience, not just a place to buy jewelry,” he said.

The stores will also house Hardy’s home collection, which is comprised of alabaster vases and flatware with silver trim. Eventually, the firm wants to expand into watches and perhaps fragrance, but entry into those categories isn’t imminent.

The brand is also launching a new advertising campaign. The campaign, to be shown to retailers at Couture, offers a fashionable look depicting a model as a contemporary goddess wearing the jewelry.