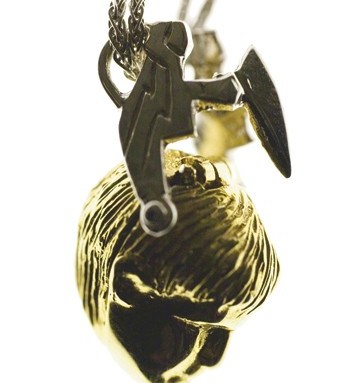 Jordan Askill’s jewelry may be crafted from gold, sapphires, peridots and citrines, but when it comes to the inspiration for his creations, the Australian designer is far from precious.

Taking his cues from found objects, Askill based one of his designs — a gold rose charm pendant that opens to reveal a citrine set in the flower — on a charm that his friend found in a Paris market.

“I wanted to make wearable objects that you keep on you all the time,” says Askill, who alternates between London, New York and Sydney. “It’s like when you’re a little child and the things you find have so much resonance.”

Askill’s fine jewelry collection, which is intended for both men and women, is based around charms worn as pendants, rings and earrings. Although it officially launched two months ago, Askill’s line already has attracted designer Rick Owens’ attention. Owens asked Askill to make some one-off pieces when the collection made its debut at his Palais Royale store during Paris Fashion Week in September. The resulting pieces included necklaces made from oxidized silver; a boy’s head charm in rock crystal; a gold swallow, whose head is set with tiny sapphires, and a gold locket in the shape of a boy’s head with a peridot hidden inside. The line, which retails for up to 1,200 pounds, or $1,755 at current exchange, for a necklace with three swallow charms, is carried exclusively at Dover Street Market in London and Owens’ store.

Askill says his jewelry stems from the pieces of sculpture that he also makes, such as the nylon resin Horse Wave piece, a toy horse that seems to multiply into hundreds of smaller horses, made using imagery fed into a computer program. “I like how something systematic and scientific can look very naturalistic,” says Askill.

And the designer, who has spent stints in the studios of Dior Homme in Paris and Ksubi in Sydney, also will reveal a diffusion line at Liberty in London for spring. The collection — called Jordy, after the designer’s nickname — is made up of yellow, white and rose gold rings and cuffs, worked into wiry heart shapes. They’ll retail from 120 pounds, or $175, for a single heart ring to 140 pounds, or $206, for a heart cuff. “I didn’t consciously decide to do a diffusion line,” says Askill. “Rather, I created these pieces as gifts for friends….It’s important to me that, while accessible, [they] can carry appreciation from person to person.”