While the brand has produced smaller jewelry collections in the past, the new launch is decidedly larger with contemporary price points.

A necklace from the Judith Leiber Jewelry collection.

The Judith Leiber brand, known for its whimsical crystal-laden evening bags, is branching out — but not too far, launching a contemporary jewelry collection.

The new jewelry assortment was designed by creative director, Dee Ocleppo, who is also co-owner and global ambassador. Ocleppo, wife of Tommy Hilfiger, came on in 2017,  four years after the brand was acquired by Authentic Brands Group.

Ocleppo didn’t need to look far for inspiration — her jewelry takes its cue from the brand’s classic crystal-encrusted miniaudierés from the countless Judith Leiber Couture collections, as well as the brand’s newer diffusion line, using motifs such as rainbows, French fries, cupcakes, popsicles and cocktails.

Nearly every piece is produced in 14K yellow-plated sterling silver and brass, with pieces using brightly colored pavé hues, set with hundreds of colored cubic zirconia stones, some so large they simulate gemstones.

“When I came on board, I wanted to add a little bit more whimsy and playfulness into the bags,” Ocleppo explained. ”We wanted to keep the jewelry connected to what we are doing with the handbags, the idea of playful statement pieces, so it was a natural progression.” The extensive Leiber archive, said Ocleppo, also played a key part in her design.

The handbag brand has produced small collections of jewelry before, most recently back in 2011, but this new concept is quite robust and varied with over 700 styles, including novelty charms like letters and numbers in a variety of sizes, which can be used to bling out any number of charm bracelets, hoops, chains and bangles.

“Personalization is always key for me,” she said of the large assortment of charm options. “I’ve always loved to customize things. Then they feel like something special to the customer, it makes it something not everyone can buy.”

The collection has an entry price point of $50 for earring studs and tops out at $2,000 for collet necklace styles, with the average price landing at $200 for various novelty charms. 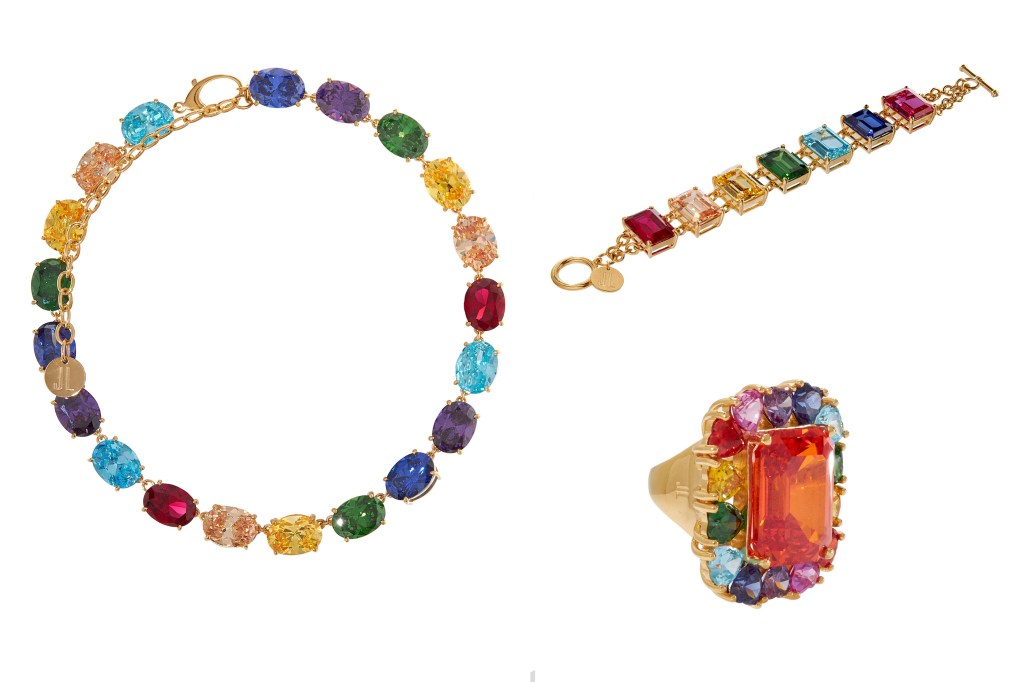 “The price points are attainable. However, they are made in a way that the attention to detail and craftsmanship is there,” Ocleppo said of the pricing structure.

Judith Leiber, who passed away last year, founded the American brand in 1963, selling it off in the early Nineties, and nearly every first lady dating back to the Fifties has carried custom-made miniaudierés. Today the brand has gained new relevancy and widened its scope, being seen on the arms and Instagram feeds of celebrities like Rihanna, Kim Kardashian West and Gigi Hadid.

“I’m really excited that some of the younger girls are getting into the brand,” Ocleppo said. “It’s fun to see girls like Gigi, girls in their twenties, embracing the brand. I think we already have a broad awareness and with the jewelry I think it will open up even more.”

The jewelry will  launch in mid May on judithleiber.com and will roll out to Judith Leiber stores soon after. While Ocleppo wouldn’t disclose timing, she reported that wholesaling the jewelry is in the cards but further down the line. “We want to make sure we put our best foot forward first,” she said.

The brand already produces other categories, having both eyewear and stationery in its stable, and, as reported in WWD, jewelry is only the first stage of an expansion strategy, with plans to expand its footprint into ready-to-wear and footwear.