Chopard's Caroline Scheufele discusses why the pretty woman with the big smile was the clear choice for the luxury brand's multimedia campaign.

Julia Roberts remembers a sentimental gift she received at a very early age.

“The first piece of jewelry I ever had was when I was probably eight years old. My father gave me a birthstone ring. It was so shiny and felt magical.”

Now, about four and half decades later, the actress with the iconic smile has become the official “ambassadress” for Chopard and the face of Chopard’s Happy Sport campaign, which launches Tuesday and unveils two new Happy Sport timepieces, though in many iterations of the designs.

The campaign with Roberts includes billboards, digital, editorial, and she’s in three short videos directed by Xavier Dolan and styled by Elizabeth Stewart. One video takes a behind-the scenes peek at a Chopard shoot with Roberts; another is a Q&A with her, and a third shows the actress blowing kisses and frolicking, as if mimicking the action of the five “dancing” diamonds in the watch cases. Through technology developed by Chopard in 1976, with movement, the diamonds begin whirling around the watch. Checking the time means also contemplating the ever-changing choreography of the diamonds. While the campaign focuses on the Happy Sport watches, Roberts wears other pieces from Chopard’s Happy Diamonds collection, which includes the watches. 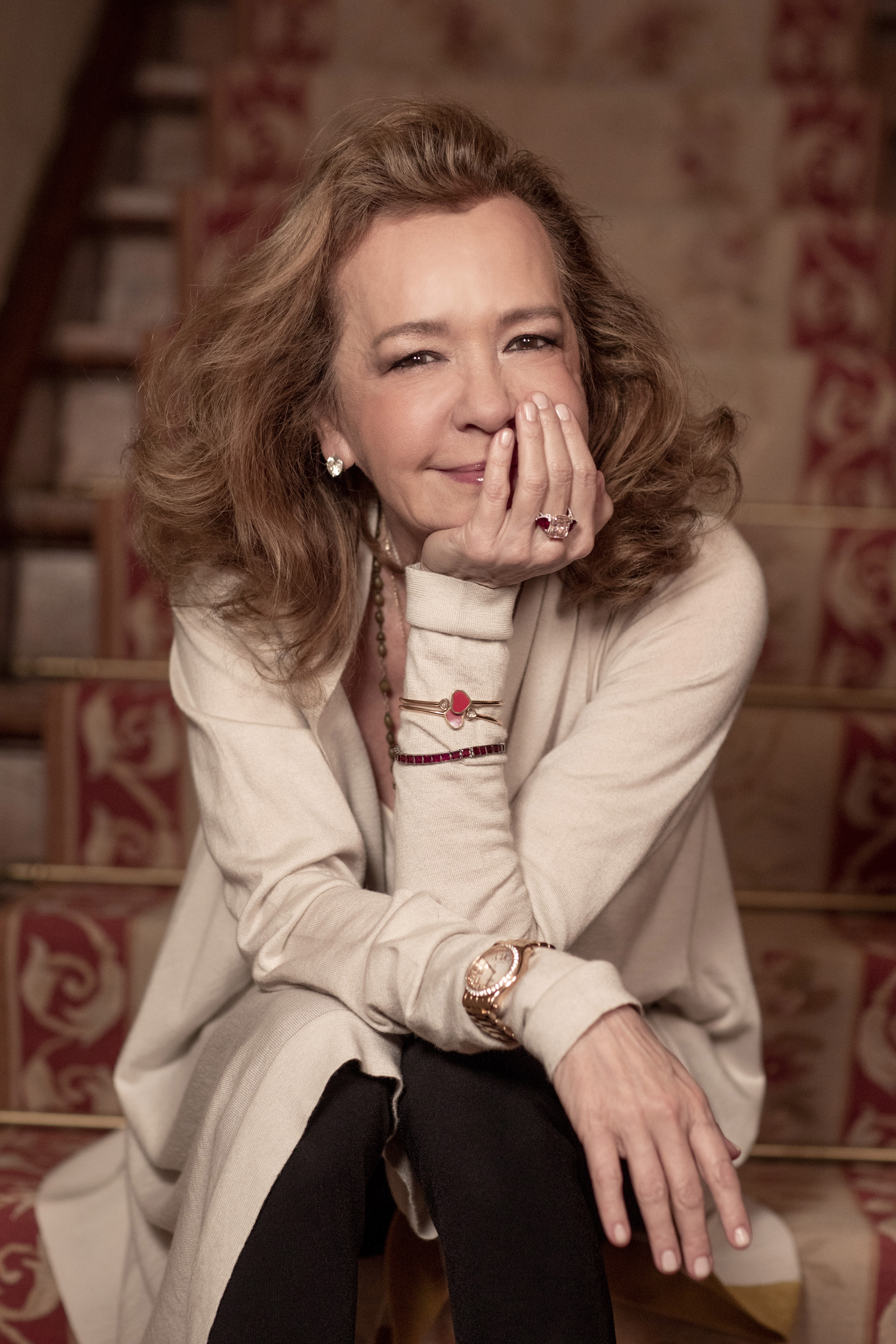 In one sense, the partnership between Roberts and the 160-year-old Swiss luxury jewelry and watchmaker is surprising. She doesn’t readily endorse products and currently only endorses Lancôme. In another sense, it’s not surprising since she’s known to wear Chopard on red carpet appearances, most recently in 2019 at the Golden Globes.

But the first time was five years ago at the Cannes Film Festival. “She was wearing a beautiful Chopard necklace with emeralds — and she was very funny,” recalled Caroline Scheufele, Chopard’s copresident, artistic director and a member of the family that owns and runs the jeweler. “She said to me, ‘With this necklace, I don’t need shoes for the red carpet,’ and sure enough she went barefoot down the red carpet.…Many A-list stars don’t go to the Cannes festival unless they have a real reason or unless they have a movie in the competition. They may be in Cannes but don’t show their face.”

Chopard has been an official partner of the Cannes Film Festival since 1998. At the next festival, which due to the pandemic has been postponed to July, Roberts will be the “godmother” of the Trophée Chopard, which is presented to a young actor and actress each year at the festival. 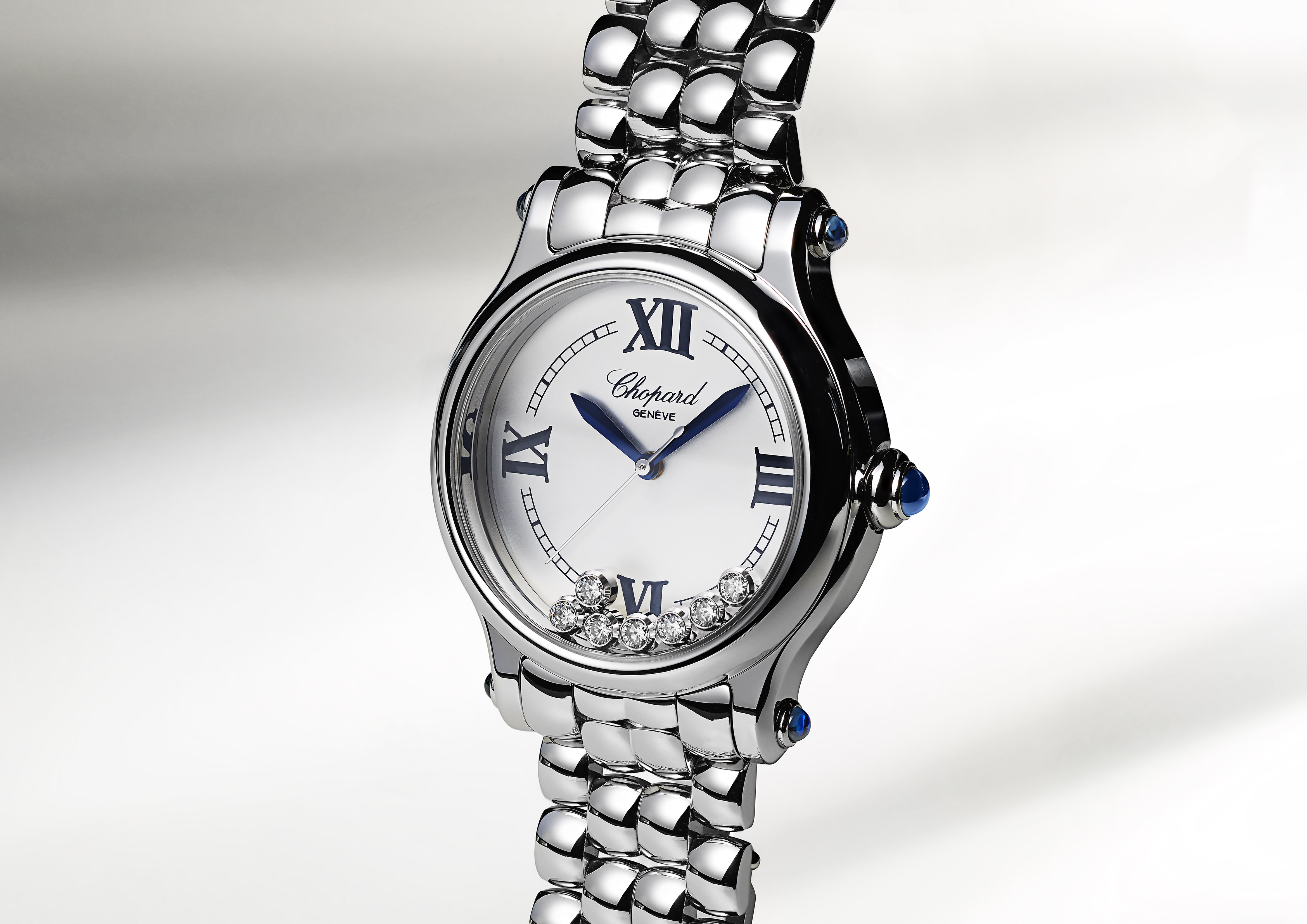 The “Happy Sport the First” watch.

In a short email exchange with Roberts (she’s been on vacation from working on a romantic comedy, “Ticket to Paradise,” co-starring George Clooney and set for a September 2022 release), she admitted that with jewelry, she can glam it up. “Wearing a truly exquisite piece of jewelry to an event always ups the ante. It takes the glamour factor to the next level,” Roberts told WWD.

Depending on her mood and the occasion, Roberts can either play it up or tone it down when selecting jewelry for an evening out. “I am a bit, all or almost nothing,” she said. “If I put on a necklace, I put on five. If I put on a bracelet, I put 10 on each wrist.”

“She is very sort of laid-back — very elegantly sportive,” Scheufele said. “Many times you see her in flat shoes, even in the movies. She is very classic, but not old-fashioned. She’s classically modern, classically chic. Relaxed. She has the kind of spirit I just love.”

Last year, when developing the Happy Diamonds campaign, Scheufele told her team it needed a beautiful ambassador with a beautiful smile. “They actually came up with 1,000 names. But I said, for me, there is only one that springs to mind: Julia Roberts. She doesn’t endorse any company except Lancôme and that’s a very good thing.”

Scheufele, a lover of movies — they inspire her jewelry designs — said she was first mesmerized by Roberts’ distinctive smile in “Pretty Woman” and was also impressed by her performance in “Erin Brockovich,” for which she won the Best Actress in a Leading Role Oscar in 2001.

“Some actors can only be the nasty or cute. But like the facets of a diamond, Julia can transform herself into different facets,” said Scheufele, who in 1993 created Chopard’s Happy Sport watch concept. Scheufele said Roberts has a multigenerational appeal. “This is also what I was looking for with Happy Sport watch. It’s 28 years old and still very modern and contemporary. It’s totally timeless and Julia is timeless.

“From inside out, Julia is a happy person. I believe that. A lot of big actresses are not really happy. I get to know a lot of them because of Cannes. When you are always in the limelight, or on Instagram, and always being photographed, you are not having a very personal life. That’s not so easy to digest for everyone. Julia is a very normal person. She is not posting every five minutes something somewhere. She is pretty balanced between her work, her family life and her love life. Some others, like Julianne Moore, are much like Julia.

“When you have friends in the film industry, it’s a give and take, not like contracts. Julia is like a friend. I talk to her like a friend. And if she wants to go to a premiere and wants to wear a Chopard necklace, we are there.”

Scheufele does intersect with the Hollywood crowd. At the 2013 Academy Awards, she met Livia Firth, the wife of Colin Firth, who received the Oscar for best actor in “The King’s Speech.” The couple since separated.

“Livia asked me where does your gold come from. She is very into sustainable fashion and I said, ‘Oh, I guess from the banks.’ But before I finished my sentence, I realized I really didn’t know where my gold is covering from. That got me kickstarted on sustainability, ethical gold. It is still an ongoing journey for us. We are very proud to say we are the first company really looking into the complexity of mining our raw materials like gold and gemstones. Livia pushed a button.”

Now materials are sourced in line with requirements of the “Chopard Code of Conduct for Partners,” which covers a range of environmental and social criteria. Chopard, founded in 1860 by Louis-Ulysse Chopard, has been developing a reputation for sustainable luxury and says it has been using 100 percent ethical gold in the production of all its gold creations since 2018. 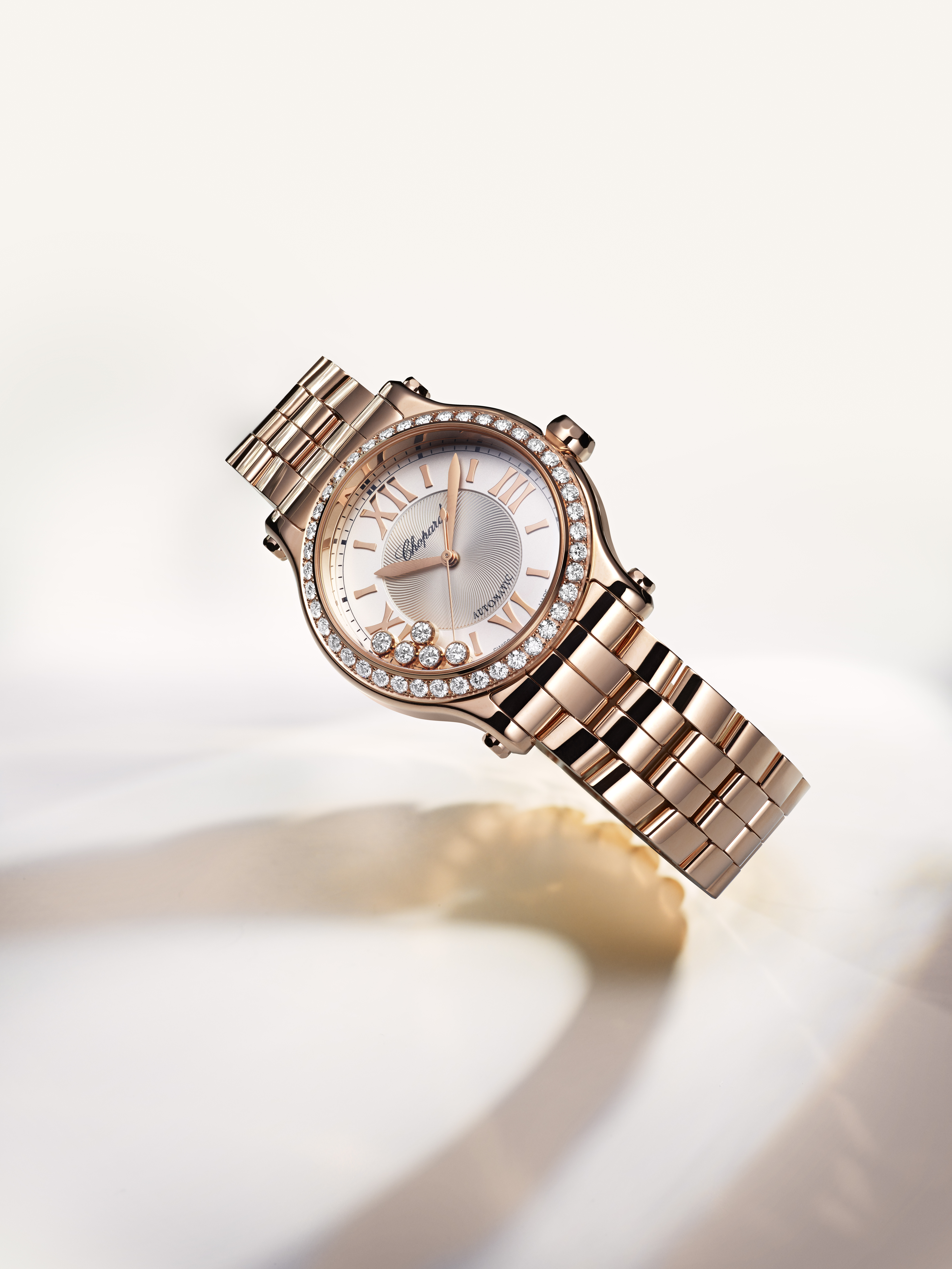 The two new watch models being unveiled, called “Happy Sport the First” and “Happy Sport 33 mm,” are crafted from steel or ethical 18-karat rose gold, as well as in bi-material variations, available on a leather strap or matching metal bracelet, and framed by a polished or diamond-set bezel.

The Happy Sport 33 mm watch is so named because of its 33 mm-diameter case inspired by the “golden ratio” principles of aesthetic harmony, meaning the proportions feel right and, according to Chopard, the watch fits like a second skin.

The watches also feature automatic winding, a central guilloché motif, as well as having each dial graced with the “dancing” diamonds set between two sapphire crystals topping the dial.

Chopard has targeted late 2021 or early 2022 for the opening of its Fifth Avenue flagship in Manhattan, in the Crown Building on 57th Street. The two-level space, with 1,279 square feet on the main floor and 1,143 square feet on a lower level, will replace the company’s Madison Avenue store on 63rd Street, where the international jeweler has operated a unit for about 14 years. Scheufele would love it if Roberts cut the ribbon at the Fifth Avenue opening, though that’s to be determined.

Asked why Chopard decided to relocate its Manhattan store, Scheufele explained, “For me personally, as a European, I always stay in the Lowell Hotel, just around the corner of our boutique. I am a Madison Avenue person. I love Madison. But the tourists, the Chinese, only go to Fifth Avenue. And for me Fifth Avenue, it’s the number-one street in the world.

“I miss America,” lamented Scheufele, who was interviewed from her home in Geneva, where Chopard is based. “I love New York more than Los Angeles or Miami. I have been in my house for one year, with my parents, and in the workshop, but I have not been traveling. For someone who travels seven months out of the year, it’s really been a shutdown. I discovered my dogs. I started cooking like crazy. They call me Uber food because I have been delivering food to the whole family.” 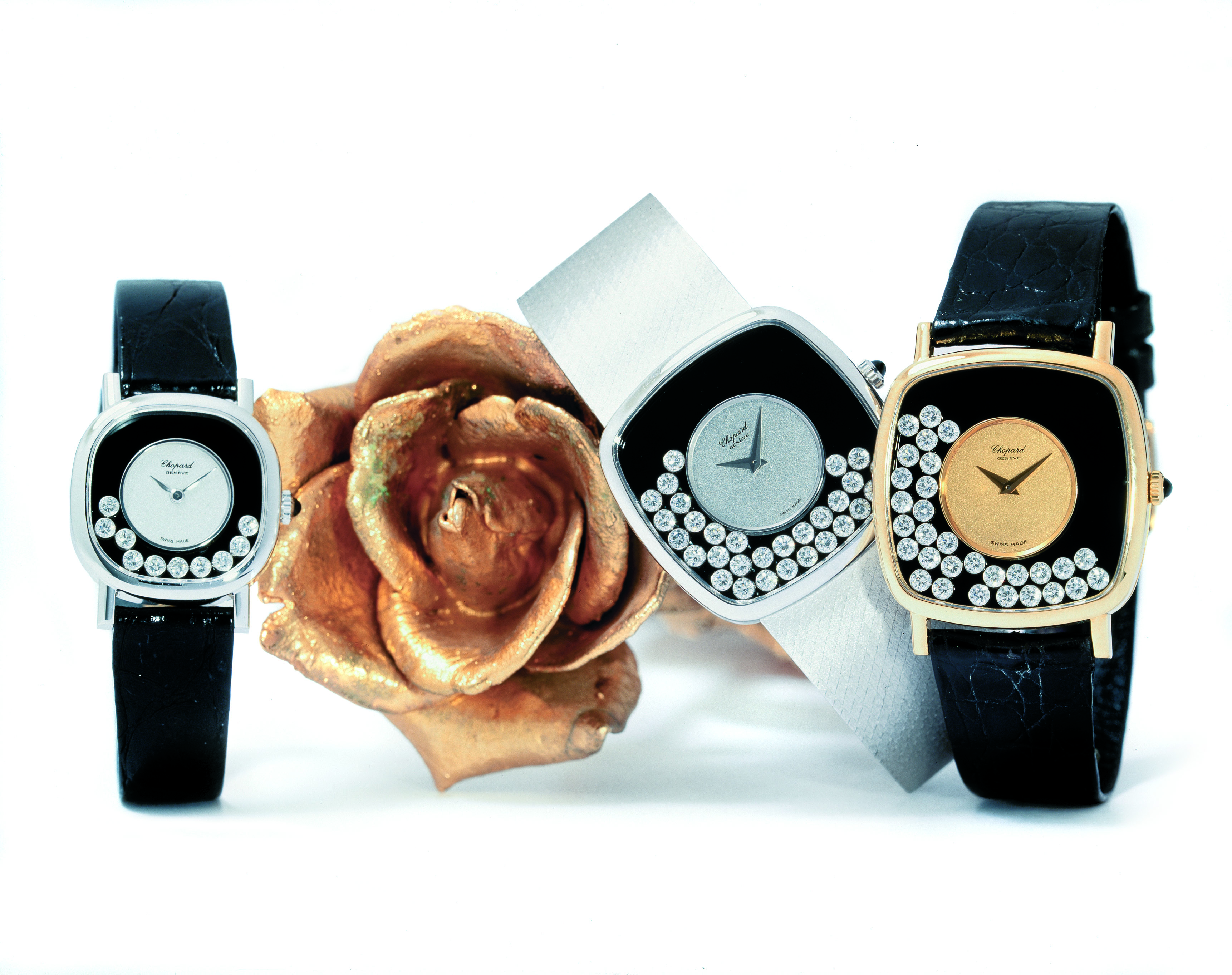 Happy Diamond watches from the 1970s.