Kamala Harris wears a custom pearl necklace by Puerto Rican designer Wilfredo Rosado for her swearing in as vice president.

Kamala Harris is sworn in as vice president by Supreme Court Justice Sonia Sotomayor, wearing a necklace by Wilfredo Rosado.

It was in September that Wilfredo Rosado received a call to duty. The jeweler, formerly of Giorgio Armani’s design studio and Andy Warhol’s Factory, was tasked with creating a special suite of jewelry for what was described as a “female politician who loves pearls.” It took him but a few moments to realize who that was — then-Vice Presidential nominee Kamala Harris.

Today, as Harris is inaugurated as vice president, she will make history as the first woman elected to the executive branch of the U.S. government and the first Black and South Asian person to hold the vice presidency. Many see her inauguration as a turning point in the fortune of women, particularly women of color, across the U.S.

Fashion is, of course, not the focus of today’s inauguration, but Rosado does play a small part in its visual narrative. The designer has crafted a special necklace for Harris’ swearing in that plays to her long history with pearls — a hallmark of her sorority, Alpha Kappa Alpha, which she pledged while enrolled at Howard University. 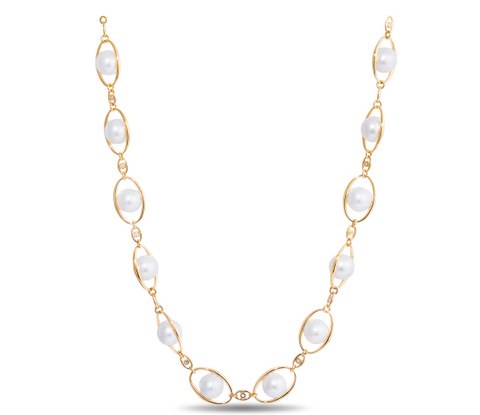 “Kamala is someone I’ve been following since she threw her hat in the ring for president. I followed her in the debates, her line of questioning during the Brett Kavanaugh hearings [for the Supreme Court] and loved her strength. To have this opportunity was beyond exciting for me,” Rosado said of creating jewelry for the first female vice president. The designer launched his brand in 2011 and has created jewelry for women including Mariah Carey, Rihanna and Julia Roberts.

The designer worked in close collaboration with Harris’ stylist, the identity of whom he declined to reveal. As previously reported, WWD believes the stylist is Karla Welch — a Hollywood power broker who dresses a wide variety of A-listers including Justin Bieber and Tracee Ellis Ross. Rosado’s collaboration with the Harris camp came after the introduction of a new “Pearl ID” collection, which aimed to re-contextualize pearls for a younger, more modern audience.

“I love to challenge the classics. The classics already exist so it’s about how I can update them with new appeal,” the designer said. Now his most significant moment with pearls arrives upon reports that women plan to sit at home in their own pearl necklaces to watch Harris’ inauguration — a small gesture in ode to the gravity of a historic moment.

Rosado designed a total of three necklaces for the incoming vice president, but the final product is strung with 11.5-mm South Sea pearls — each surrounded by a halo of 18-karat gold — with pearls linked together by small diamonds weighing a total of 0.66 karats. The necklace is fully articulated — it can move and spin about, giving it a certain whimsy. Harris also wore a special American flag lapel pin by David Yurman.

When designing the necklace, Rosado said he “thought about a woman as the first female vice president elected, who is also a person of color — that’s history. I love her strength, there is a feminine aspect of it that made me want to add a bit of glamour to that moment, so there is a special movement to the necklace.”

He saw the necklace’s “chain link as a design to represent toughness and also fashion in a way. It looks very classic in terms of execution but when you see it in person and the movement, it’s very glamorous but still tough. It’s a bold necklace, not a classic string of pearls.”

While fashion is not paramount to Harris’ swearing in, Rosado said: “I don’t think what any female politician wears diminishes her power and intelligence and influence she has in this country and the world. If anything it compliments and conveys the power she holds.”

Rosado, born to Puerto Rican parents in the mainland U.S., has been forthright in his support of the Puerto Rican community. Throughout the Trump administration, Rosado has been upset by what he considers multiple infractions against the Puerto Rican people. “I’m driven internally and so proud of being of Puerto Rican descent — it’s a driving factor for excellence in my career,” he said.

With the new Biden-Harris administration, he feels a sense of hope. “President-elect Biden has expressed his thoughts on Puerto Rico and possible statehood, allowing people to decide on that potential. The past administration was a travesty and gave terrible treatment to the Puerto Rican people; with this new administration the future looks positive,” Rosado said.

While his designs are on loan to Harris for the inauguration, Rosado hopes they will one day end up in a museum. “For me this is beyond jewelry, this is beyond a necklace — this is history,” he said.