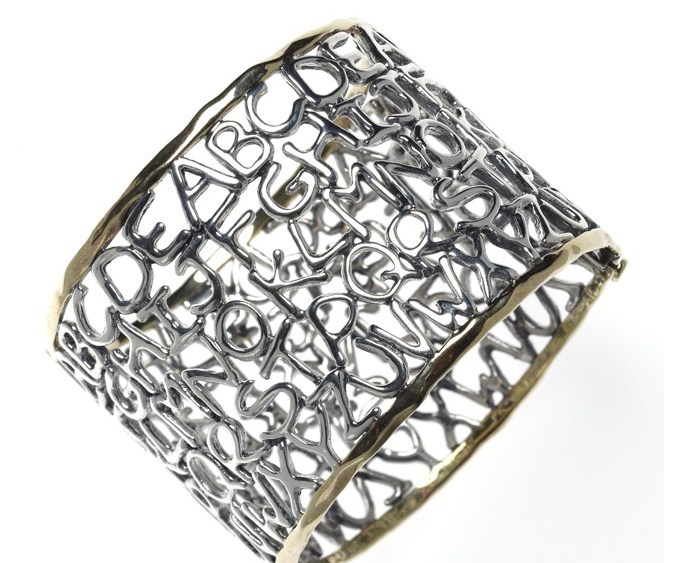 NEW YORK — Karatas is looking to raise awareness for literacy and learning advocacy.

The brand has partnered with nonprofit group Mentoring USA, a division of Help USA, which was founded by Matilda Raffa Cuomo and which she runs with her daughter, Maria Cuomo Cole.

The fine jewelry company, a self-funded venture established in 2011 by Carolyn Gang of SeidenGang Designs and Robyn Troob, will debut its Esperanto collection today on karatasdesigns.com, with net profits going to benefit Mentoring USA. The 20-piece line is a collaborative effort with Jennifer Fisher, whose knack for incorporating the letters of the alphabet into a range of necklaces, pendants, cuffs, bracelets, earrings and rings resulted in a “modern twist on 26 of the most recognizable characters.”

“The Karatas [Esperanto] collection is a valuable contribution to Mentoring USA. Proceeds from sales will benefit one to one youth mentoring for at-risk children in New York City and cities throughout the country,” Cuomo Cole said of the first jewelry collection to benefit the cause.

Prices for the Esperanto line range from $125 for a small silver letter on a leather cord to $575 for a silver cuff with 18-karat gold, to an entirely gold cuff retails for about $6,500 (the latter two featuring the entire alphabet), with an average price point of about $675. Materials run the gamut from sterling silver to 18-karat gold — with accents such as leather cords, diamonds, semiprecious and precious stones and inspirational words like “dazzle,” “shine,” “empower,” “strive” and “fulfill.”

Help USA — the national congressional model for services and housing for homeless populations — was established in 1986 by New York Gov. Mario Cuomo, and Mentoring USA was founded by his wife, Raffa Cuomo, as the first statewide, school-based, one-on-one mentoring program in the U.S.

“It’s meaningful. We can start a trend. The design is delightful,” Raffa Cuomo said, wearing a circular alphabet disc on a black leather cord. It’s clear the former first lady of New York is passionate about the cause, as she points out her first job was as an elementary teacher at the Dutch Broadway School in Elmont, N.Y., before she became a mother and dedicated her life to service (she continued to tutor in Spanish, though, she added).

“I feel strongly about children and education. Mentoring and working with Maria and Matilda is both a privilege and an honor. To have the opportunity to help children with developing their skills through literacy and learning in a creative way is challenging and satisfying,” added Gang, also a former teacher.

According to Jeffrey Beri — who oversees operations for the company that span brand and marketing development, manufacturing, e-commerce infrastructure and retail production — the plan is to launch initially with e-commerce and then enter the wholesale market by targeting high-end specialty boutiques and department stores. In January, also National Mentoring Month, the line will become available at Rocks by Jolie B. Ray, a boutique in Armonk, N.Y.

Beri revealed that, early next year, a costume jewelry version of the collection will make its debut on QVC, comprised primarily of bronze with silver accents. “We want to target the mass market with a careful, calculative rollout,” Beri said. “We want to make it significantly personal.”