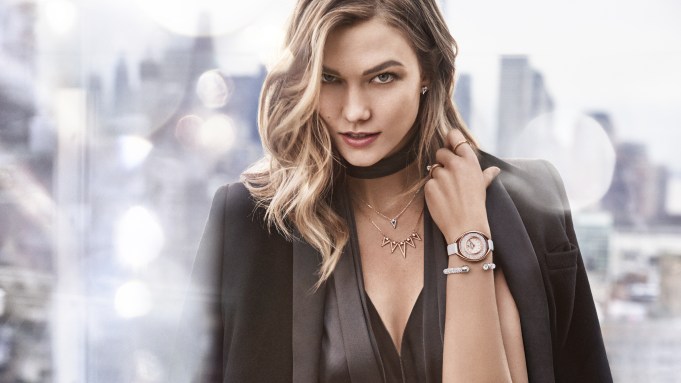 Karlie Kloss’ face will soon rise up on another billboard. The model has been named Swarovski’s new face. Kloss succeeds the firm’s former spokesmodel and her fellow Victoria Secret Angel alum, Miranda Kerr.

Swarovski’s chief executive officer for consumer goods Robert Buchbauer said the company’s decision to sign Kloss is strategic and is tied to the brand’s recent objectives to ramp up its North American presence and increase its fashion quotient.

“We wanted to bring our brand to the next level but also the next generation — we thought that Karlie would be a perfect match. She represents a certain openness and a certain mind-set — a new philosophy, if you will. She is very fashionable and very beautiful, which is key when you talk about the next generation of consumer — specifically, powerful women who should become our long-term customer. On top of that, we’ve decided to put more emphasis on the North American market and who would be better than Karlie?” Buchbauer said.

Her Swarovski contract includes exclusivity clauses for the jewelry and watch markets. The partnership will see Kloss fronting the label for the next two years.

Kloss, having just returned to New York from the Cannes Film Festival, said of Swarovski: “It’s such a global presence, you see [their ads] in the subway, also all throughout Europe — I’ve been doing a world tour lately and at every airport and every country I’ve been I’ve seen it somewhere. In Cannes as well — it’s been very exciting to play ‘I Spy’ and spot the ads.

“They are a brand that does bridge the gap [between fashion and commerce], the scope of what they do its pretty extreme. In the time I’ve spent working with them I’ve met different family members from different aspects of the business — one part of the business is loose stones, another is stone-cutting, another part is the actual design and the product, another part is working with high-fashion brands,” the admittedly “curious” Kloss told WWD of what she’s recently gleaned from the Austrian firm — the headquarters for which she plans to soon visit.

She will appear in outdoor, television, print and digital campaigns for Swarovski — the initial round for which see her wearing jewelry, watches and sunglasses laden with the brand’s crystals. Print ads will begin appearing in the September issues of national magazines.

Buchbauer said with Kloss’ help, Swarovski “would like to see double-digit growth in the North American market in the next two years.”

“Big cities offer much more potential for market penetration,” he said. “In the next few years we want to concentrate on our fashion sense in the five or six biggest cities in the U.S.

“We are trying to put a lot of emphasis on the designs and are also working on our language internally and externally — we are going to work with Jean Paul Gaultier and focus our efforts [on style].” In February, it was revealed that Gaultier had designed a stone called “Kaputt” for the brand.

As for Kloss, the 23-year-old said she has been “procrastinating on my summer plans. I am going to take some time in August to be with family and friends, but as of right now I’ve been focusing on my Code with Klossy summer camp.”

The scholarship day camp program is new this year and will instruct girls aged 13 to 18 in New York, St. Louis and Los Angeles how to code. They will learn a curriculum formulated by The Flatiron School — a developers’ program based in New York.

When camp is over, the U.S. will be a mere three months shy of a presidential election — the likely Republican candidate for which is tied to Kloss by way of her boyfriend, Joshua Kushner. His brother, Jared, is married to Ivanka Trump — making Donald Trump his father-in-law.

When asked if this association in any way rattling, Kloss preferred to play it safe. “I stay out of politics,” she said.