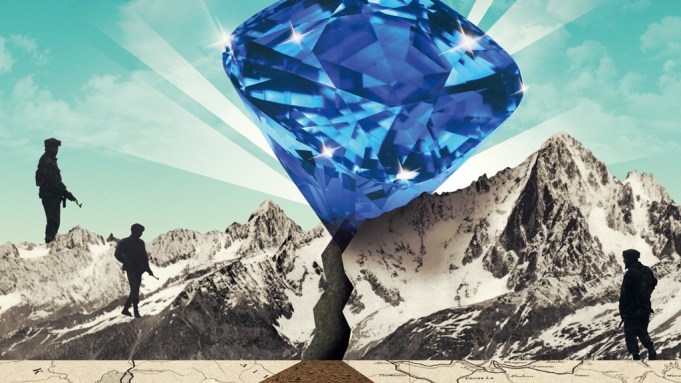 At Sotheby’s spring Magnificent Jewels auction last month, one ring sent paddles flying with particular vigor — quickly sending bids into the multimillion-dollar stratosphere, with the final gavel sounding at $5,093,000 — nearly $1.1 million higher than the lot’s conservative estimate. The fuss was not over a gumball-size diamond or royal relic, but rather a sapphire ring — a 28.18 carat Kashmir sapphire ring.

This frenzy over Kashmirs is not specific to Sotheby’s, but is indicative of the international demand that the stone has developed. Worldwide, auction houses like Sotheby’s and Christie’s and jewelers including Fred Leighton report that collectors are coveting over the rare gem — with per-carat prices surging in excess of $200,000.

The Kashmir sapphire is considered the world’s rarest and most prized sapphire — widely revered for its distinctive “rich” tonality and “velvety” luster. Its microscopic inclusions diffuse light with the eerie glow of fog, far outpacing the beauty of sapphires from other geographical sources like Sri Lanka, Burma and Montana.

But beyond the stone’s unforgettable appearance is the draw of its immense scarcity — the by-product of the Kashmir region’s treacherous terrain and political instability.

The most prized Kashmirs were discovered in the 1880s within a Himalayan cave located 14,000 feet above sea level — nearly two miles above the first cloud line. The mine was a boon for years, yet only remained fertile into the early 20th century.

Located smack-dab in the center of territory disputed by India and Pakistan, Kashmir’s difficult terrain, hostile political environment and proneness to terror activity has made it nearly impossible to seek out new mining locations ever since. Experts say that a sapphire of extraordinary quality has not been mined from the region in more than 100 years.

This adverse climate has pushed the Kashmir sapphire’s value to gargantuan heights — at a rate that continues to climb each day. Early in its history, the stone was beloved by European royal families and the Maharaja — but the democratization of wealth and far spread of emerging markets has led to their increased collectability, and therefore, scarcity.

“From the moment they were found, the Kashmirs were the benchmark of desirability,” noted Russell Shor, senior industry analyst at the Gemological Institute of America.

Sources say the stone could reach a per-carat value of $300,000 to $400,000 within the next few years. For this, the Kashmir has joined the ranks of Burmese rubies, and pink or blue diamonds as the world’s rarest stones. Greg Kwiat, chief executive officer of Fred Leighton, said the auction prices of Kashmirs have risen so steeply that the company now combs private collections to obtain stones for its clientele.

More than just a prized object, Kwiat said the sapphires’ rapidly escalating worth has made them a solid financial asset — particularly because the Kashmir supply chain does not appear to be expanding anytime soon.

The region has suffered from a slew of political, security and economic setbacks since 1947, when the U.K. granted independence to India and created Pakistan — drawing an indiscriminate border between the two nations as a partition. Located along the northern part of this division is Kashmir, a region beloved by both nations for its picturesque vistas and distinct culture.

Upon achieving independence, both countries laid claim to Kashmir. Soon after, they became entangled in a violent dispute that left them unable to reach a political settlement regarding the region’s borders. In the eyes of the international community, there is still no formal border between India and Pakistan in Kashmir. Instead, the two nations preside over plots of land divided by an informal “line of control.” India claims that Kashmir is meant to fall under its own jurisdiction, but Pakistan “sees Kashmir as an integral part of itself,” according to Anubhav Gupta, senior program officer at the Asia Society Policy Institute. In fact, he said Pakistan owes the “K” in its name to the Kashmir region’s initial.

At present, the hostile debate over who lays sovereign claim to the area continues. The situation became especially volatile after 1987 when the Indian government was accused of forging election votes in Kashmir. Terror groups crossed into the region from Pakistan and neighboring Afghanistan by traversing the Himalayan Mountains from which the original Kashmir sapphires were mined. In the past 25 years, the fallout from these attacks, and others, carried out in the name of retribution, has led to the deaths of thousands of Kashmiris.

Now as terror activity steadily winds down, Kashmir still remains highly militarized — an obvious discouragement to gem mining. “It would be unwise to go into the mountains, because the military says you are not supposed to be there and you run the risk of being seen as [an opposition] militant by mistake,” Gupta said of the risks mining would present in the Kashmiri Himalayas.

Shor noted more bluntly: “Because of the weather, there are only two to three months a year where you can even get to where the sapphires are — and if you get there, you can basically get shot. You have Pakistan on one side and India on the other, and then in the middle you are going to go in and dig for sapphires? It’s a bad idea, to say the least.”

The wavering safety of the region, Gupta explained, has in turn stunted Kashmir’s economic growth: “It’s a completely legitimate fear for businesses that even if it’s relatively safe in Kashmir now, there is no telling that it will stay that this level — companies don’t want to set up mining or factory operations because that’s a multiyear investment.”

Shor says he has seen sapphires purportedly of Kashmir origin at trade shows, but they do not boast the same “inner glow” of the rare Kashmirs being chased today. “Gemstones are like wine, in a way,” he said. “The taste of wine can vary from estates in the same region because the soil makeup is a little different.”

In the interim, the Kashmirs of yore show no sign of slowing. A 35.09 carat sapphire that was sold at Christie’s in 2000 for $853,000 is now coming back to the market this month in Geneva — with a conservative estimate price of $4.2 million.