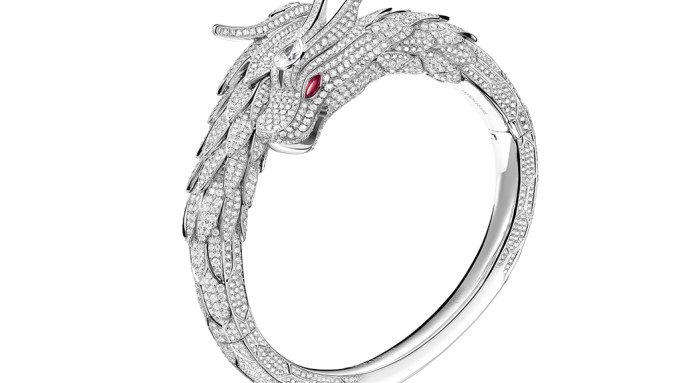 Armed with sparkling ampules and teddy-bear pendants, Kering-owned Chinese jewelry brand Qeelin is looking for success in the North American market. The 11-year-old label, of which Kering acquired a controlling stake in 2012, has announced its plans to officially open North American distribution channels — expanding its operations from a model that was previously only devoted to Asia and limited European markets. The label is aiming toward a September retail debut.

Helmed by founder and creative director Dennis Chan and newly instated chief executive officer Christophe Artaux, the brand has enlisted a distribution partner outside of Kering to tackle the market. Alberto Petochi, president at the Anima Group, is working to sign Stateside retail partners for the label. In its current markets, Qeelin distributes product through its own brick-and-mortar establishments — making this North American expansion one of its first goes at a wholesale operation.

Artaux, speaking to WWD while in New York for Qeelin’s pre-Met Gala cocktail party, said that the brand’s interest in wholesale stems from the U.S.’s distinct retailing culture. “What we are looking to do [in the U.S.] is go through a selective, distinct network of multibrand jewelry stores, since this distribution is existing in the U.S., unlike in other geographical areas like Asia Pacific,” he noted.

Qeelin’s prices range from $700 to upwards of $500,000, with the majority of its sales hitting in the $1,500 to $3,000 range. The brand declined to provide financial projections for its first year of North American business.

Established in Paris, with roots in Hong Kong, the brand describes itself as something of a geographical hybrid that draws aesthetic inspiration from both locales. Its designs translate popular Chinese themes and customs into modernist design elements. The brand’s signature Wulu line attributes its silhouette to a traditional Chinese gourd ornament that is said to ward off evil spirits. Rendered in a sleek, minimalist shape, the Wulu line is fashioned in precious metals, often inlaid with pavé and other precious stones.

The brand’s Bo Bo line of articulated bears began as an ode to the much-beloved panda. It has since grown into a full range of bears that come fabricated in a variety of themes and colors — some, even, with interchangeable outfits. Qeelin product is manufactured in a mélange of workshops — scattered throughout Italy, France, and Hong Kong.

At present, these designs have found larger success in the Asian market, which contributes 70 percent of the brand’s sales. In Europe, the label’s Palais Royal boutique has helped foster a small but cult following — drawing fanfare from personalities such as Marc Jacobs and Katy Perry.

Qeelin’s launch just before the Met’s unveiling of “China: Through the Looking Glass” was thematically opportune — the brand dressed a number of stars, including Chinese actress Zhu Zhu and models Caroline Trentini and Liu Wen, for the occasion.

While no North American retailers have been confirmed, the brand is optimistic that its forthcoming Stateside presence will help harness more occasions like its marked evening at the Met. It is in talks with Neiman Marcus, Bergdorf Goodman, and Hing Wa Lee, and expects that orders will be finalized after this month’s forthcoming Las Vegas jewelry shows (Qeelin will not be exhibiting but is in talks with Couture to show next year).

Petochi says that the initial response from retailers and buyers has been strong because “there has been a lack of creativity in the market, the quality overall has kind of decreased because people have been trying to save when the euro was higher, diamond prices increased, gold increased — Qeelin has been consistent, with its quality through the past 12 years at a top level.”

He added: “I think, as far as strategy, the idea is to launch wholesale and build awareness and, as a second phase, to do the branded store, which [Qeelin] specializes at.” He expects a first freestanding flagship location to open in the first 12 to 14 months of U.S. business, likely on the West Coast.

Artaux noted of potential locations: “The East Coast is important, but as you know, because we have this Chinese background, the West Coast will also be a focus for the brand. We would be looking into San Francisco or L.A. in the future.”