The latest crop of accessories designers are women with a flair for detail. 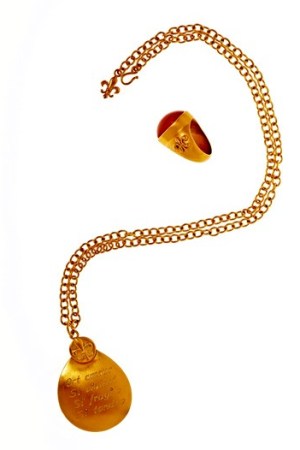 ANNE BEZAMAT
Backstory: Bezamat is definitely familiar with the fashion game. At 13, she was launched into the international modeling scene when a photographer snapped a few shots of the French beauty on the beach. “I traveled a lot,” she says. “I did all the shows in Paris and Milan, and I worked for every magazine, every designer and photographer — Mr. Penn, Scavullo, Herb Ritts, Patrick Demarchelier.” Her whirlwind modeling career lasted throughout the Eighties, and, when she left modeling, her family became her focus. She now has two sons, aged 14 and 16. So she kept her childhood passion for drawing on hold. Last year, however, a Brazilian jewelry designer asked her to do some sketches. Ultimately, that collaboration didn’t pan out, and Bezamat was left with a bounty of unrealized designs. “A friend of mine saw the drawings I had done for the jeweler and told me, ‘She did you a favor. Just do it yourself,'” says Bezamat, who took her friend’s advice and started producing the collection eight months ago.

Collection: “It’s very French bohemian chic,” says Bezamat of her brushed bronze and sterling silver necklaces and pendants, some engraved with French sayings about love (“Toi et moi,” “Je t’aime moi non plus”), all clasped with small fleur-de-lis. “It reflects my roots and my travels.” Bezamat uses semiprecious stones such as turquoise, carnelian, blue topaz and cognac diamonds, as well as crystals “for good energy.” The collection consists mainly of necklaces, most of which come with a chain and a velvet cord for versatility, and the designer plans to add rings and bracelets.

This story first appeared in the July 21, 2008 issue of WWD. Subscribe Today.

Stats: Wholesale prices range from $150 for an engraved, brushed bronze necklace, to $400 for a carnelian fleur-de-lis in silver. Anne Bezamat is available at Scoop, New York and East Hampton, and annebezamat.com. — Jessica Iredale

Backstory: For Boor, a former senior designer for Theory, and Regan de Vogele, a former finance executive, exercise helped acquire not just a fit physique, but a nascent accessories empire. The American-born pair met several years ago while working out at a gym in Paris. “I had moved there to do something new, although I didn’t have a job at the time,” explains Boor, who attended the Fashion Institute of Technology and was, she says, looking for inspiration in the City of Light (Regan de Vogele was living there with her French husband). The pair bonded over a mutual love of fashion, especially shoes.

Collection: “I see our shoes paired with jeans and a sexy T-shirt, and also on the red carpet,” Boor says of the line’s versatility. To wit, mixed in with the va-va-voom stilettos are sweet slingback ballet flats.

Stats: After partnering with Galeries Lafayette and Printemps for their first collection, Boor and Regan de Vogele are selling Vouelle by private appointment out of their Paris showroom, as well as in boutiques in California, Switzerland and Italy. Wholesale prices range from $230 to $600. — Sarah Haight

SYLVIA TOLEDANO
Backstory: A former painter who studied design at the Cours Bercot in Paris, Toledano began crafting crystal-crusted minaudières earlier this year, after her own search for an evening clutch ended fruitlessly. “I love to go out and dress up, and [since] I didn’t find [a] minaudière I really loved, I made the fi rst one for me, and then a second one, and a third,” Toledano says. “All my girlfriends wanted some, and the collection started.”

Collection: The limited edition minaudières feature varied whimsical motifs, from a cheery panda to an edgy skull, even the Indian god Ganesh, all studded in Austrian crystals. An added touch? “I think it’s always convenient to have a little pen when you go out,” says Toledano, “so I made [one] with matching crystals to go inside each bag.”

Stats: Sold at Le Bon Marché Rive Gauche in Paris, the line will be available at vivre.com beginning in August. Bags wholesale for $600. — S.H.

Backstory: If it weren’t for a cross-country trip to Tucson, Ariz., when she was still in college, Jennifer Nuñez de Villavicencio would be swimming with the fi shes now — literally. She was a student at the University of Massachusetts Amherst studying marine fisheries when she dropped out to go west with her then-boyfriend. “I started working with this woman there, who made Navajo jewelry,” recalls Nuñez de Villavicencio, “and it just clicked.” Since then, she has worked with a number of smaller jewelers and metalsmiths including Neal Rosenblum and Steve Sarnecki. Fall sees the launch of her first solo collection, Nuñ, done exclusively in 20-karat gold with the artisans at Gem Palace.

Collection: “I want to push the envelope with metalwork,” says Nuñez de Villavicencio. To that end, her collection features 20-karat gold manipulated into intricate patterns — latticework bracelets and rings, for example — some of which include mobile features, like shifting panels. The core infl uence behind the line is architecture, especially from Cuba, where her grandfather managed the famous Fifties luxury department store El Encanto. In a nod to her Cuban heritage, she’s mined everything from the country’s Spanish tiles to its wrought-iron gates.

Stats: Wholesale prices for the collection range from $1,000 for earrings to $4,500 for the more complex bracelets. Store accounts are in the works. — Venessa Lau