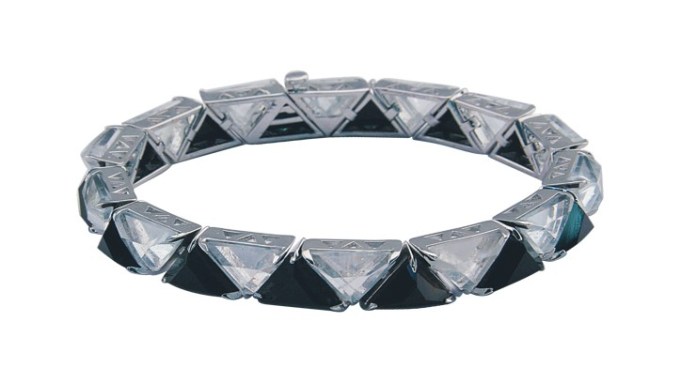 Jason and Daniel Landver, the 26-year-old cousins who helm Los Angeles jewelry firm Lucas Design International, are stepping out from behind the licensing and private label curtain for the first time with a namesake line that tweaks fine jewelry traditions for leading-edge consumers.

“Our goal is to really give our target consumer a product that can’t be duplicated at a lower price point because of the complexity that was still affordable,” Jason Landver said. “I always wanted to create something that was very wearable, not something that could be worn only once a year, but was still unique.”

The debut custom-cut Landver collection consists of 28 pieces in four groups: tennis, solitaire, strand and spike. In tennis, Art Deco-inspired, triangular-shaped rock crystals are a spin on the classic tennis look, and large asymmetric stones or metal fashioned like stones are the centerpieces of the solitaire rings, bracelets, necklaces and earrings. The strand assortment features almost 50-inch chains for layering and, true to the group’s name, spike contains jewelry covered in stone spikes.

Pure sterling silver and sterling silver plate in platinum, 18-karat yellow gold and 18-karat rose gold are used throughout. Landver has come out of the gate with a limited stone selection of rock crystal, amethyst, onyx and topaz, but it will be expanded as the collection matures. Pieces range from $100 to $1,000 retail.

“We definitely start with a very defined point of view,” Landver said. “I really wanted to come out tight for the first collection. I want the designs to evolve with the seasons the way you would with colors in dresses.”

The Landvers have a well-defined profile of the line’s potential consumer: She’s a trendsetter typically in her 20s who shops at her area’s foremost boutiques and prestige department stores. For example, Daniel Landver named Barneys New York as a store he’s targeting for distribution.

“Their shopper is very savvy and conscious of what it means to be more fashion-forward,” he said. “This [Landver] price point is in the lower end of the spectrum, but I don’t think it is too low for that younger woman.”

The cousins followed their fathers, Michael and Leon, who established fine jewelry company M&L in 1976, into the family business and injected M&L offshoot Lucas Design with youth. They have developed Lucas’ licensed portfolio into a diverse powerhouse of brands that includes Playboy, Kitson, Disney and Warner Bros., and guided it to roughly $30 million in retail sales last year.

This year, Jason and Daniel are moving into the spotlight. In addition to launching the Landver line, they assumed the positions of president and chief executive officer, respectively, at Lucas Design, as their fathers stepped down from executive roles, but remained major shareholders They also have plans to push Lucas’ accessories capabilities beyond jewelry into handbags, hats and belts.

Referring to Landver, Daniel said, “With five years under our belts, we felt that it was the right time to put ourselves out in the market.” However, he added, “We are not aggressively selling [Landver] like with our other lines. It is based upon putting it into the best stores in the world and building a following.”

In its first year, he estimated Landver would generate $1 million in retail sales. In the long term, he said, “We want this to continue to grow and be very meaningful. We would like to emulate [David] Yurman in terms of his success. We want to grow with our consumer.”