The jewelry designer has opened a 4,300-square-foot boutique at 19 Place Vendôme. 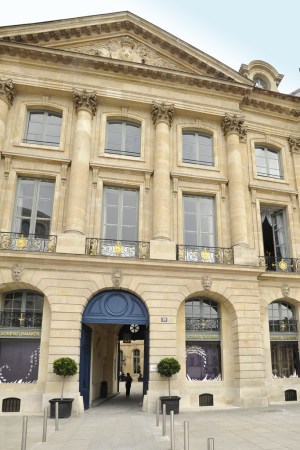 PARIS — “It’s a very special location for someone who loves jewelry,” Lorenz Bäumer said about his new 4,300-square-foot boutique at 19 Place Vendôme.

The corner unit, which opened to the public earlier this month, offers a view of the Napoleon-topped bronze column through a double-height window in the central atrium, while rear windows look out onto the courtyard of the Hôtel d’ Évreux, one of the most storied mansions in the French capital.

The unit’s double exposure — steps away from the Ritz Hotel (now closed for renovation) and boutiques by almost every major jeweler under the sun — means daylight pours onto Bäumer’s creations. They are displayed in cubic niches clustered on walls, or columnar glass cases inspired by structures that Bäumer, an engineer by training, once spied in a nuclear facility.

Bäumer, in concert with architect Anthony Bechu and interiors firm Volume ABC, dressed the boutique in an array of neutrals, from cream to taupe to cocoa.

While resolutely modern, a foil to the 18th-century exterior, the boutique’s curved shapes — including long, oval tables that wink to Bäumer’s passion for surfing — and subtle textures exalt rather than overwhelm the jewelry. The designer, whose favorite themes include nature, architecture and poetry, noted the palette goes well with white, yellow or pink gold.

With its three windows dressed in dark purple and crystal-like paper shards to display rings, necklaces, bangles and earrings, the boutique marks a big step for Bäumer, who had sold his collections from a third-floor location across the square since 1995.

“It was time to take it to the next level,” he said, projecting the unit should bring a 30 percent bump to revenues, which last year totaled 3.8 million euros, or $5 million at average exchange.

Bäumer said it took three years to secure the space, including an upper level that was previously residential. The ground floor had no previous retail occupant and had historically been used to house carriages.

The high-profile location will expose Bäumer’s name and his designs to a broader range of jewelry aficionados, including those who might have been too intimidated to be buzzed into his previous sale salons.

Yet he plans to preserve the personal, exclusive approach. A separate section of the store will contain a gallery where Bäumer will display his collections, starting with a selection of his 150 photos of the Vendôme column, taken from 1850 right up to modern times.

Up a striking mirrored staircase is a private dining room and kitchen for entertaining clients, friends and editors.

His showcase may also appeal to independent-minded shoppers weary of big brands.

“We’re not part of a group, we’re fully independent and we’re not everywhere,” he said, seated at a leather-topped table in his office, at which he can receive elite clients to discuss bespoke designs. “It becomes more personal.”

Bäumer expanded his product range to fill the rambling store and to anticipate the needs of walk-in traffic. He extended the price range in both directions, with accessible pieces starting at around 1,000 euros, or $1,320 at current exchange, and running up into six and seven figures for special orders incorporating exceptional stones, of which he plans to use more, including an emerald-cut 10-karat diamond.

Bäumer said he would continue to travel with his collections to meet with clients, with stops including New York, London, Geneva, Shanghai and Hong Kong.

In October, Bäumer appointed Cristina Egal as managing director, a new post, in anticipation of the retail venture. Previously, Egal operated a communications agency with such clients as BNP Paribas, Sodexo, Servair and Fondation Claude Pompidou.