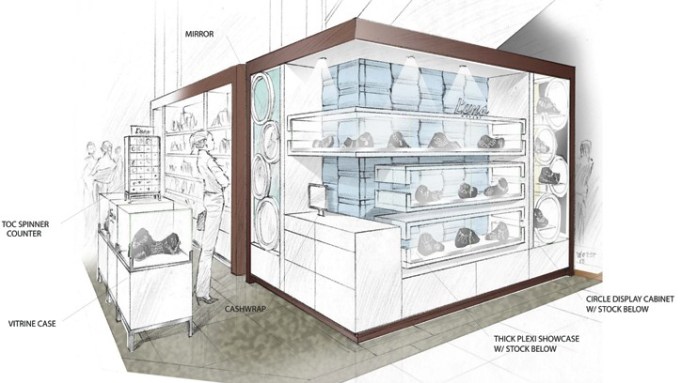 MACY’S IS TAKING ITS EXCLUSIVE approach to the already specialized category of jewelry.

The retailer, with an exclusive brand roster that includes Tommy Hilfiger, Martha Stewart and Donald Trump, has tapped the founders and designers of fine jewelry firm Faraone Mennella to create an exclusive line called L’una.

Starting next month, the sterling silver jewelry brand will be distributed in 66 Macy’s doors and there will be three in-store boutiques within Macy’s flagships in New York, San Francisco and Chicago. The line eventually could roll out to more doors, and also will be available on macys.com.

L’una, which means “the one” in Italian, is expected to drive $50 million in sales within two years, according to Amedeo Scognamiglio, co-founder and co-designer of L’una.

“It’s a perfect bridge between fashion and fine jewelry for Macy’s,” said Terry Lundgren, president and chief executive officer of Macy’s Inc. “It’s a void in the [current] assortment. It’s simple, clean jewelry, with price points that are extraordinarily competitive for the Macy’s core customer. It’s a great example of us working collaboratively with the design team to offer an exclusive.”

Faraone Mennella is owned by R.F.M.A.S., a six-year-old firm that also operates the Amedeo and Renaissance jewelry brands. The company was founded by the Italian-born Scognamiglio and Roberto Faraone Mennella.

The inaugural L’una collection will feature more than 160 styles of silver jewelry ranging from delicate earrings to bolder necklaces. Retail prices for the collection, which is produced in the same Arezzo, Italy, factory as the Faraone Mennella brand, will start at $35 and climb to $895. Four collections are slated to bow each year.

“Faraone Mennella is going in a direction of more luxury,” said Scognamiglio, who noted the average price for the fine jewelry line is $7,500. “Working in silver, you have less constraints of price points and even the stones that we use. With L’una, we’ve been having more fun with shapes and variations.”

The designer fine jewelry business has been a sensitive market of late. With the lackluster economy in the U.S., consumers have become polar in their fine jewelry interests. They are gravitating toward either the upper strata of the jewelry spectrum, as in large diamonds and rarefied pieces, or toward more commodity-driven items, such as a line bracelet. As such, many jewelers are diversifying by launching silver lines at considerably lower price points that yield higher margins than 18-karat gold collections, or they launched lines with TV shopping channels QVC and HSN.

For Renaissance, the accessibly priced cameo jewelry brand, Scognamiglio appears on HSN, while the high-end cameo jewelry firm Amedeo has one upscale boutique on Lexington Avenue in Manhattan and there are plans to open additional outposts. Faraone Mennella is sold through retailers such as Bergdorf Goodman, Neiman Marcus and Saks Fifth Avenue.

“With Faraone Mennella, every piece is an heirloom. With L’una, we have to be much more concerned with the trends,” Scognamiglio added. “It’s much more young and fresh in terms of approach.”

Macy’s plans a slew of marketing to promote the brand, including print advertising in newspapers such as The New York Times and the Chicago Sun Times, and a direct mailer to consumers illustrating the line.

Lundgren admitted the jewelry business is different from other fashion categories, but that the retailer has geared up to present it well to the customer.

“The name will cause our customers to be curious and stop to take a look at the product,” said Lundgren. “After that, it’s all about the way it feels and looks. It’s not like a handbag where you have a name on the strap. It’s ultimately about the product.”