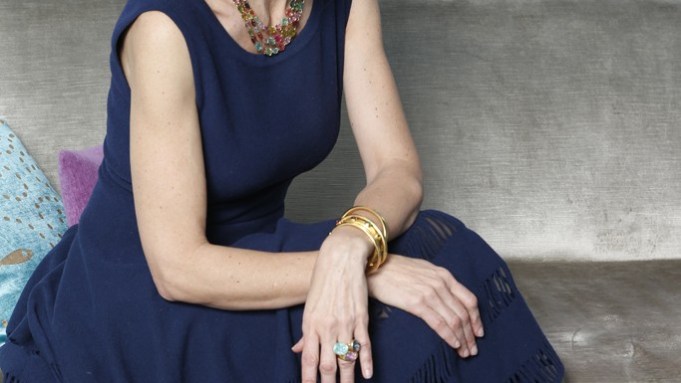 NEW YORK — “There is something about the necklace on the skin,” Marie-Hélène de Taillac said, carefully hooking one of her new pieces, a 22-karat gold and diamond lace necklace, around her neck.

The designer, who has split her time between Paris and Jaipur, India since launching her namesake line in 1996, is in town to open her first boutique. The 270-square-foot shop, located at 20 East 69th Street, opens Saturday. It is de Taillac’s third freestanding door and first in the United States, joining units that opened in Tokyo and Paris in 2003 and 2004, respectively.

The Botticelli necklace, which retails for $36,845, is one of de Taillac’s newest creations — being revealed for the first time at the new shop — along with a pair of $4,640 American Flag star sequin earrings made from gold, diamonds, sapphires and spinel.

She’s also designed a Gold Peacock Feather group born from her daily morning swims in Jaipur, where she would see the most striking peacocks. The group is comprised of two pairs of earrings — the smaller size contains Laguna-blue apatites and the larger pair diamonds — as well as an elaborate matching collar that retails for $44,845.

Standing inside the jewel box of a shop, de Taillac explained that she wanted the store to “mix the old and new.” The same wallpaper, a custom-made powder-blue fabric stamped with the brand’s gold logo (also de Taillac’s family crest) adorns the walls in the store and the company’s showroom next door. It’s also present in the brand’s two other stores — even though each shop contains unique decor elements specific to its location. She describes the space as almost boudoirlike, but still contemporary — and very French. In fact, the inspiration came from two private visits to Versailles — Marie Antoinette’s private La Meridienne Chambers, specifically. This translated to Baguès-style wall lamps with rock crystal parrots, mirrors, Madeline Weinrib’s champagne-hued hand-knotted wool carpet and a silver ceiling.

“I don’t enjoy traveling and finding the same thing in every city. I try to adapt to the city we’re in. In Tokyo, [the store] is more modern and the floor is white leather. It’s contemporary with lacquer and leather,” de Taillac said of that shop, which was designed by Marc Newson. “In Paris we kept a French feeling. It has a wood floor and a high ceiling.”

De Taillac has worked with The Gem Palace of Jaipur since the inception of her company 17 years ago, and she is perhaps best known for her briolette necklaces fashioned from colored gemstones (a style once typically reserved for diamonds). She maintains that every stone passes through her hands — even the 46,000 carats of aquamarines that fill the Yves Klein glass table in the center of the showroom, which took her a year to accumulate.

The designer runs her company with the help of her three sisters, Sophie, Gabrielle and Victoire, and expresses scant desire to turn the collection into a mass brand. She is content with her distribution — 48 doors worldwide in Asia, Europe and the U.S. — and her own three stores. She notes that although the most amount of pieces are sold in Japan, the U.S. commands the highest volume of sales.

“It’s difficult to grow and maintain quality. I want a life — [and] I won’t be inspired if all I do is make jewelry,” she said, adding: “When you do what you’re meant to do, doors open easily.”

De Taillac does want to enter two new categories: jewelry timepieces and books. Although she has yet to develop the former, her first book is slated to come out later this year.

“It’s not a guide, but my view on how to wear jewelry. It has some practical and [then] some crazy information. Stones have certain powers,” she said.