This Jewelry Brand Will Bring Its ‘Soleil’ to St. Barths This Holiday Season

Marina B is introducing a more approachable jewelry collection, focused on a joyful Mediterranean look.

Courtesy of Marina B

Hope and optimism are what Guy Bedarida wanted to convey with the launch of his collection for the Marina B jewelry brand.

The New York-based jewelry guru, who three years ago acquired the house founded by Marina Bulgari in 1976, is levering on Marina B’s heritage to revamp the brand’s appeal.

While high jewelry remains at the core of the brand, Bedarida has decided to enlarge its offering by introducing in the Soleil collection more affordable, easy-to-wear pieces.

“Soleil is more approachable both in terms of price points and looks,” said Bedarida, who conceived the collection in Bangkok, which he could not depart for beginning in March due to the spread of the pandemic. “I was traveling there to buy gems and Thailand suddenly closed the borders and I had no chance to leave the country. During my quarantine there, I had the idea of this jewelry range, which is based on Marina’s use of sun as a symbol of optimism and hope.”

Crafted from yellow gold combined with silver and gems, including tiny emeralds, and retailing at an average price of $4,000, Soleil features sun-shaped pendants, necklaces, earrings and rings that evoke Southern Italy’s maiolica teals. The inspiration is directly linked to the Marina B heritage and Bedarida’s life, since the jeweler, who previously was creative director at John Hardy and held creative executive positions at Van Cleef & Arpels and Boucheron, was raised between Tuscany, Rome, Naples and Paris. 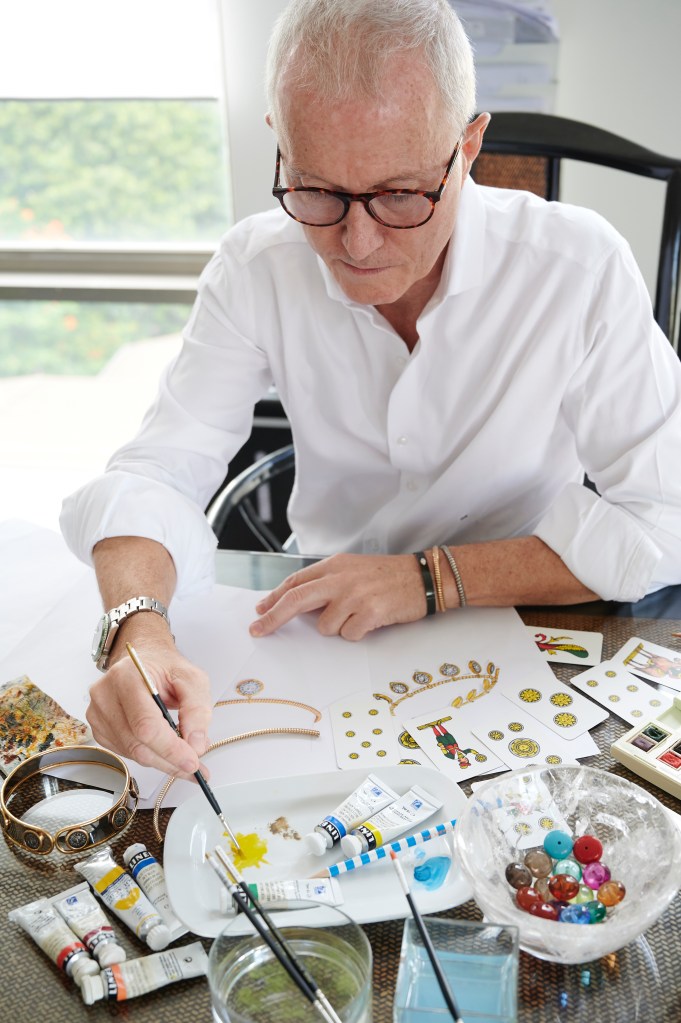 Marina B creative director Guy Bedarida.  Courtesy of Marina B

The Soleil collection, which is previewed on the brand’s e-store, will be available during the holiday season at the Lyla Dumont fashion store in St. Barths, where Bedarida will also meet consumers for a trunk show under the palms.

“For the launch of Soleil I wanted to try something different in terms of distribution, teaming up with a fashion store and I will adopt this strategy also in the United States,” said Bedarida, adding that the jewelry range will be available beginning at the March at the brand’s historic partners, including Bloomingdale’s, Saks Fifth Avenue and Neiman Marcus. “Before bringing the collection to St. Barth’s, we made a test in California and in two weeks we had an 80 percent sell-through, which makes me very optimistic about the success of this product range,” Bedarida added.

Some of the Soleil pieces feature a signature element of Marina B creations — the tubo gas flexible construction that wraps around the body, which characterizes the designs of the Trisolina signature collection, a bestseller among Asian male consumers, according to Bedarida. “There, men wear the Trisolina bracelet with the Cartier Love one,” he said.

While the U.S. is still the brand’s main market, Bedarida is developing new partnerships in the Far East, with a focus on Singapore and China. “Three months ago we hosted our first show in China in an art gallery in Beijing and the feedback has been great,” he said. “Now it’s time to understand who is the best partner to develop a solid distribution there.”

However, even if the brand is developing more accessible collections, including the La Casa interior design accessories and gifts range, to reinforce its identity across international markets, customization remains Bedarida’s biggest passion. “There is nothing that makes me happier than sitting down with a customer and designing with her her own jewelry piece,” said the designer, who, COVID-19 permitting, from January to April will travel across Florida, California and Texas to host trunk shows.