Delfina Delettrez Fendi and Matchesfashion declared their “love” for one another in an exclusive 10-piece collection by the Italian jeweler for the London-based specialty fashion e-tailer. To mark the launch, which hit the web site on Valentine’s Day, Matchesfashion feted Delettrez along with special host Chloë Sevigny, who also shared the love, at the uber-cool lighting gallery Roll & Hill.

Both Delettrez and Sevigny recalled fondly the Film on the Rocks festival that brought them to Thailand along with photographer Ryan McGinley, Humberto Leon and Carol Lim of Opening Ceremony, among others. According to Sevigny, “We hung out for a week, saw where they filmed the beach. It was basically a paid vacation.” Delettrez remembers a screening on a raft in the ocean of the original “Alice in Wonderland,” only dubbed with actual nature sounds. 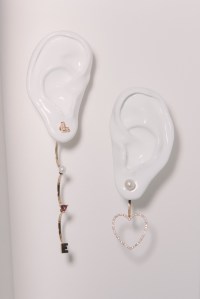 Sevigny was already a client of Delettrez’s when they met, gravitating toward surrealist-inspired jewelry. Dressed in Rodarte and adorned with earrings, choker and ring from the Roman jeweler, Sevigny lauded her saying, “She is such a unique voice — [her jewelry is] humorous, edgy, cool. I think it’s important to help support female power in the industry.”

The collection draws upon Delettrez’s piercing collection, adding hearts and letters. For instance, she uses a pearl for an “o” to spell “love” on earrings and bracelets. The fourth generation Fendi, who was in town with her artist boyfriend Nico Vascellari, said aside from Valentine’s Day, the time is right to wear a positive message. “In a time of uncertainty, it’s good to use your body as a little manifesto, having this word on you to celebrate love every day,” she suggested. 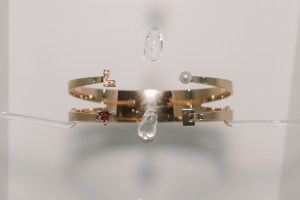 Matchesfashion’s Ruth Chapman has been a lover of Delettrez’s work from early on and always knew she wanted to collaborate. A few things aligned: the holiday; her presence in New York, and most importantly, the kickoff of Matchesfashion’s 30th anniversary festivities. Chapman divulged that she and her husband, Tom, have several celebrations upcoming for 2017, based on the brand’s London flagship town house. The retail power couple plans to open several elaborate “residences” in at least four cities — New York, Los Angeles, Paris and a city to be determined in Korea — each stocked with product unique to the location. Chapman admitted that when they started 30 years ago, there was no grand plan. “We were just kids having fun,” she said. “We weren’t even married.” But as their relationship solidified into marriage and family, the business grew alongside. “Each time we had a child, we did more to keep the food on the table — ‘let’s open another store, let’s start a web site.’ It was organic.”