The store features a blown-up jewelry box that appears to be exploding out of the wall.

PARIS — Diamond specialist Valérie Messika is opening a store in Hudson Yards, her namesake label’s third boutique in the U.S., as it continues to expand internationally.

“We have good news, we have proven that we are resilient,” Messika told WWD in a Zoom call, outlining the label’s plans for the U.S. and other markets including Japan, which she also has her eye on.

The brand is on track to bring in annual sales around 10 to 15 percent lower than last year, she said.

October was a historic month for the label, said Messika, offering a sign that demand could bounce back back when the pandemic subsides.

“A lot of stores were closed and we suffered a lot in London — it’s the capital that suffered the most — we did a lot of tourism there,” she said.

Paris, too, was hit, and the executive flagged a large decline in the Rue Saint-Honoré store, just around the corner from the Place Vendôme, which tends to do a lot of business with tourists.

Business in markets like the Middle East and China was brisk, helping to compensate for declines elsewhere, she noted.

In the U.S., too, the brand’s business has suffered from the coronavirus crisis, after rising quickly, with 70 percent sales growth around the end of February.

“Before COVID-19 we were finally taking off in the U.S. — it’s not an easy market,” she said. The subsidiary was opened in 2016, followed by a store in L.A. and one in Miami. The Miami store, which is located in Aventura Mall, has been hit harder, since it opened just before a wave of lockdowns. That store, in black and dark gray, was designed by Sophie Reulet, who heads Messika’s creatives studio and has worked with the house since 2005.

The new Hudson Yards location, which will feature jewelry from the Move, My Twin and Glam’Azone lines, as well as the colorful Lucky Move necklaces, will reflect similar codes but also has a touch of its own.

“It fits the codes we like to work with, a bit rebellious and precious, a bit mineral and also luxurious — we like the brilliance of diamonds,” she said.

In the back of the store facing the entrance there is a blown-up jewelry box that appears to be exploding out of the wall.

“I love my jewelry box, I don’t communicate enough. about it — it has a lovely geometric form, and a light inside,” she said. “I thought it would be nice to communicate a bit more on the ‘gifting’ side of the brand.”

She was also after a bit of a “street style” and artistic touch — for a city like New York, she said. 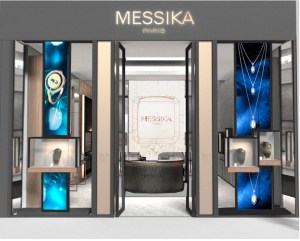 “I don’t like it when all the stores look the same,” added Messika. While she uses the same materials in various locations, because it’s complicated to source different materials for each, although she tries to add a certain “twist” to them.

Messika jewelry is also sold in around 52 multibrand retailers, including Wempe, with around 60 percent of distribution going through wholesale channels.

“It gives me brand visibility that I would never have because I’m a family brand with family funds, I could never open so many stores — I couldn’t have 450 sales points in the world,” she said of the strategy.

Retailers are increasingly giving her more space in their stores, she said.

“Before it was maybe a display and now I’m told I can have a window, a shop-in-shop, sometimes I have a hall or an entire wall. That makes me happy — the more the brand can express itself through big windows, the more I can express its DNA, the breadth of its range, bring the products alive,” she said.

In the longer term, the goal in the U.S. is to expand moderately to around 80 points of sale overall — not to over a hundred, she said. And when it comes to the brand’s own stores, she’s open to a few more flagships in cities with strong jewelry markets.

“Perhaps Dallas — we know there is a lot of buying power in that zone, so why not. If a partner offers to open a store for me, I wouldn’t be against it,” she said.

In Asia, the brand opened stores in Macau, Hong Kong and Beijing this year, and has its eye on Japan, where it set up a subsidiary.

“It’s a good jewelry market — very traditional and it takes more time and maturity,” she said. The designer sees room for her offer, which speaks to younger clients looking for branded jewelry that is modern, she added.

“There’s space to fill and we’re starting to fill it,” she said.