The niche jewelry designer hopes the First Lady’s fondness for her designs will lend her brand wider recognition. 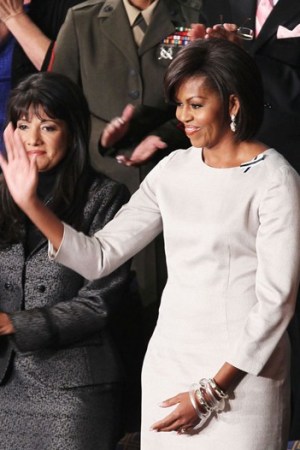 After almost 20 years as a niche jewelry designer, it seems Kara Ross has been called up to the major leagues — thanks to prime placement on Michelle Obama’s earlobes.

The First Lady was first photographed wearing Kara Ross earrings on Nov. 26 while receiving the White House Christmas tree. Since then, she’s been spotted in Kara Ross designs six times, including at Tuesday night’s State of the Union Address by President Obama. The earrings and bracelets Obama has worn all hail from Ross’ Gemstone collection, which was inspired by Frank Gehry’s Hearst Tower in Manhattan.

Ross began her career in jewelry after earning her Gemological Institute of America license in 1991. She worked under a private label, garnering clients through word-of-mouth, until founding her own design house, Kara Ross New York, in 2003. The company was founded on fine jewelry, but has since expanded into lower- and moderate-priced styles, as well as exotic skin handbags. Regardless of the category, Ross’ creations are always bold, art-inspired and feature mixed media ranging from moonstone to stingray to zebrawood.

The designer’s relationship with the Oval Office began in 2010 when Ross was given an unexpected assignment. “The Chief of Protocols’ office saw we did wood jewelry, and they wanted to have some things made by an American artist for Michelle Obama to give to visiting heads of state. They sent us this big chunk of wood from the White House lawn,” recalled Ross. “We made some pieces with it and on each one we wrote, ‘Designed Exclusively for Michelle Obama by Kara Ross.’”

The resulting designs included a wood heart pendant with sterling silver details, and a wooden shirt cuff bracelet with a gemstone accent.

Ross said of the experience, “I thought, ‘How great, with a visiting head of state, giving them a gift by a) an American artist and b) it’s literally a piece that originated from the White House.’ I thought it was awesome that they even thought of me, to be honest with you.”

She also believes Obama’s public embrace of her designs is consistent with the label’s steady momentum. In 2003, Bergdorf Goodman was Kara Ross’ sole retailer. Eight years later, Kara Ross handbags, jewelry and belts are sold at more than 100 retailers including Net-a-porter, Bloomingdale’s, Saks Fifth Avenue, and most recently, Carolina Herrera. Ross has tripled her category offerings and designs seasonal lines for handbags, fine jewelry, and her boutique jewelry collection Kara by Kara Ross. As a result, Ross’ designs cover a wide swath of price points, ranging from $100 to $10,000.

In 2009, Kara Ross New York reported sales of $2.1 million. A year later, the company reported growth of almost 60 percent, with sales of $3.3 million.

If Ross’ future echoes that of other Obama fashion annointees (see Jason Wu), there’s a real possibility of additional capital to reinforce the brand. The designer was hesitant to outline any grandiose plans for expansion, though she admitted shoes and a self-standing boutique could be in the far future. “I’d say later on maybe I could get into shoes or something like that,” she said. “But I also feel like I don’t want to stretch myself too thin. I want to focus on what we’re doing now and really making sure it’s perfect.”