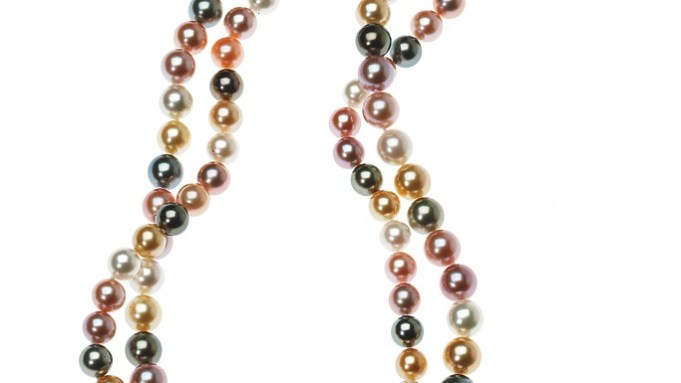 They called him the king of pearls.

Mikimoto Kokichi, the son of a noodle-shop owner, seemed unlikely to play a role in transforming the jewelry business — or influencing fashion, for that matter. From a working-class family, Kokichi dropped out of school in Toba, Japan as a teenager, and began selling vegetables in order to support his family. While working, he became fascinated with pearls as he watched pearl divers from a nearby port bringing in their daily trove.

Years later, while judging a pearl exhibition in Japan in 1878, Kokichi, then 20, noticed something was off; some of the pearls were misshapen, while others were undeveloped. That realization sparked a desire to develop the first man-made pearl, one that would be free from the flaws that plagued natural ones. Over the years, using Akoya oysters, he began testing ways to cultivate pearls, and in 1893, developed the correct formula.

This set into motion the creation of a new industry of cultivated pearls, as well as his namesake brand, Mikimoto. He opened his first jewelry boutique in Ginza, Japan, and stores in London, Paris and other major cities soon after.

It’s been 120 years since Kokichi cultivated the first pearl, and to commemorate that milestone, Mikimoto is unveiling a high-jewelry collection that showcases modern twists to the brand’s signature looks.

Called 120, Mikimoto has created 12 collections, each with various styles, to tell the story of the brand’s heritage and future. Ranging in price from $50,000 to $500,000, the pieces incorporate different kinds and colors of pearls, such as conch and melo and gold and black. Further color is woven into the collections with water opals, pink sapphires, carved jade, cabochon star sapphires, onyx, diamonds and yellow, white and pink gold.

The high-jewelry collection, which includes necklaces, bracelets, rings, earrings and pendants, uses rare pearls and stones, which the Mikimoto customer has come to expect over the years. One of 120’s signature pieces is a large, golden, baroque necklace with strands of golden pearls intertwined with diamond pavé. Other pieces make use of Akoya pearls, opals and various kinds of gold and platinum to represent themes in nature.

According to Mikimoto vice president of design Amy Kim-Araneo, it’s that decadence of design that reflects the company’s deeply rich history.

Mikimoto’s name quickly transcended his humble beginnings, and the man behind the pearls became synonymous with luxury and status. Indeed, the scientist-turned-designer created jewelry for Japan’s Imperial family, American socialites and A-list actresses, including Grace Kelly and Elizabeth Taylor. To this day, the name Mikimoto conjures up images of Marilyn Monroe donning a strand of Mikimoto pearls, which were a gift from Joe DiMaggio on their 10-day honeymoon in Japan.

For many Americans, Mikimoto holds a larger and more personal meaning, Kim-Araneo said, noting that after World War II, it was a trend for American soldiers returning from battle to bring their sweetheart a strand of pearls. Often, those pearls were handed down to the next generation who, when they visit Japan today, often purchase additional Mikimoto jewelry.

Spreading brand awareness was part of Kokichi’s mission when he started his business.

“His philosophy was that he wanted every woman to have a Mikimoto strand,” offered Kim-Araneo, who explained that for this reason, the brand has produced a more affordable 120 collection in its retail stores.

Set to hit boutiques in the fall, Mikimoto is releasing a special 120 cultured pearl strand, in three different styles. The first necklace includes 120 Akoya cultured pearls and represents the original pearl Mikimoto cultured in 1893 off the waters of Toba. The strand, which will retail for $15,000, will feature an 18-karat white gold clasp accented with royal blue enamel lacquer.

The second necklace, which will retail for $30,000, comprises multicolored black South Sea cultured pearls, and represents the rare type of pearl Mikimoto first cultured in 1914. The pearls in this strand run the gamut from slate gray, silver and pistachio to peacock green and midnight black with overtones of green, rosé or blue.

The third strand, which is priced at $33,000, consists of 120 multicolored South Sea and freshwater pearls. According to the jeweler, it marks Mikimoto’s mid-20th-century expansion into the international market that “helped shape the company’s enduring legacy.” This strand uses gold South Sea, white South Sea and pink and peach freshwater cultured pearls.

Although Mikimoto continues to be relevant in pop culture — Lady Gaga, Angelina Jolie and Salma Hayek have all been photographed wearing the brand’s designs — Kim-Araneo hopes the retail and high-jewelry collections will broaden its appeal outside of Japan.

“Mikimoto is considered the Tiffany of Japan. In America, it is thought of as just pearls,” she explained.

In order to change that perception, the designer said she “modernizes” the jewelry by playing with the lengths of the strands, as well as colors, textures and shapes of pearls. She also adds fashion-forward touches by enlarging the clasps on necklaces and bracelets. Layering long strands and mixing pearls with other materials keeps the brand from seeming “old,” she said, noting that being “old-fashioned” is a stereotype of pearl-centric baubles.

“The high-jewelry line acts as a halo effect to build the brand,” Hoffman said.

Currently, Japan is Mikimoto’s most mature and largest-volume market. In tandem with China, the U.S. is quickly becoming the company’s focus for future growth.

“The current situation for the high-end luxury jewelry market is very positive,” Hoffman said, referring specifically to business in the U.S. “It’s a difficult market, but based on Mikimoto’s brand position, we are seeing growth at the high end.”

With a product range that spans from $300 to more than $300,000, Mikimoto is able to touch a variety of consumers, but it’s the high-end sector that is seeing the most growth. As a result, the company is raising price points by creating more one-of-a-kind pieces that start at between $5,000 and $10,000.

Hoffman said core, classic jewelry makes up 70 percent of Mikimoto’s business, with fashion-forward items accounting for the remaining 30 percent. Of that 30 percent, a “small percentage” makes up one-of-a-kind baubles. Although he wouldn’t specify the current percentage, Hoffman said he sees one-of-a-kind jewelry growing to 10 percent of Mikimoto’s business.

The recession temporarily put a pin in Mikimoto’s growth, Hoffman said, noting: “Our business suffered drastically, but over the last couple of years, we have experienced double-digit growth, accelerated by China.”

With built-in brand recognition across Asia, Mikimoto is targeting China first for expansion. Opening shops in the U.S. in places like New York, Los Angeles, San Francisco and Las Vegas has followed, in part due to the high number of Asian tourists who visit those American cities. Hoffman said that Mikimoto currently has 40 doors around the world, including boutiques and shops-in-shop. Although he would not detail store opening plans, he said that while the brand continues to grow in markets such as Russia, other areas of interest include Canada, Eastern Europe, South America and Brazil.

“We are looking to build our distribution in areas we are currently represented,” Hoffman said. “We are reaching a discerning customer who is looking for something different. We reach the brand-conscious consumer who wants to have their taste of Mikimoto and the consumer who understands Mikimoto and wants to buy higher-priced materials.”