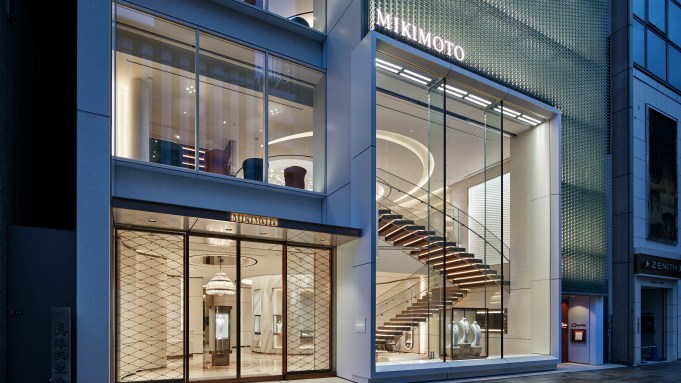 TOKYO — When Hitoshi Yoshida took over as president of storied Japanese jewelry company Mikimoto nearly six years ago, his first and broadest goal was to shore up its once untouchable brand value, which had taken a hit starting with the 2008 financial crisis. But he soon learned that — at least in Japan — this would prove a less daunting task than many may have anticipated.

“After about a year the number of customers from overseas started to increase a lot and our performance also improved, so the will and ambition of those working for us gradually and naturally increased without me even having to do anything,” Yoshida said.

But that’s not to say that he sat on his laurels and waited for things to happen to the company. He made plans to completely rebuild Mikimoto’s flagship store in Tokyo’s Ginza district, which opened in June after two-and-a-half years of construction. Other stores, such as the ones in Osaka and Nagoya, were moved and reopened in new, better locations.

Mikimoto has had a retail presence in the glitzy Ginza neighborhood since 1899, when founder Kokichi Mikimoto opened his very first store there. The newly reopened unit features a striking glass facade covering six floors of retail space and one floor with an event space that will host exhibitions rotating about every six months. As a subtle nod to the natural origins of the brand’s materials, elements of nature are used throughout the interior design.

While the Japanese are not historically large consumers of jewelry products, the market has gradually been shifting, and more international jewelry brands have jumped on what they see as an opportunity. Last year, Jason Arasheben chose Ginza as the location for his first Jason of Beverly Hills store outside the United States.

But it is Mikimoto’s very Japanese commitment to service that Yoshida thinks sets it apart.

“More than people who buy things because of the brand, people are buying from places where they know they can go to the store and they’ll get a warm reception and great service,” the executive said. “It’s not enough just to have a brand and be silent. If you don’t provide really good service and hospitality, you won’t see success reflected in your sales. It’s a time of fierce competition in that sense.”

Mikimoto also has a second, smaller store just a few blocks away from the Ginza flagship. But since the larger store reopened, Yoshida said customer numbers have increased by between 20 and 30 percent. In addition to a service counter and the friendly and helpful staff that greet customers as soon as they enter, the flagship now offers a concierge service. Yoshida said the purpose of this is to consult with customers, not just to sell to them.

Yoshida believes this superb service, as well as Mikimoto’s creative designs and high quality products — the company only uses pearls that rank in the top five percent in terms of quality — are what keeps customers coming back to the brand.

“I think one thing that’s unique about us is that we have customers who first come in to buy a relatively low-price item, as a gift or for their child or something, and then next they start buying things for themselves,” he said. “We have an extremely large number of repeat customers who come in dozens of times over 10 years, 20 years, 30 years. I think that’s one area in which other jewelers can’t really compete with us.”

Mikimoto’s founder is credited with producing the world’s first cultured pearls nearly 125 years ago, and these types of products still make up roughly 70 percent of the brand’s total product offering. But it was also the first company to sell diamonds in Japan and current products incorporate a variety of gemstones as well.

After that initial growth spurt courtesy of strong demand from overseas shoppers in Japan, Mikimoto has seen its duty-free sales taper off somewhat. Yoshida said that after China lowered its import taxes, shoppers within China can now buy products from international brands at roughly the same price they would pay abroad, which has led to fewer Chinese shoppers visiting Mikimoto’s stores in Japan. Yet these customers remain very important to the company as a whole.

“For jewelers all around the world, Chinese people are some of our richest customers. Wherever you go that is selling expensive things, they are selling them to Chinese people. So in that sense I think Chinese people are sustaining the jewelry business,” he said. “They say there are 13 million rich people in China, which is almost larger than the population of Tokyo, and they are traveling all over the world and buying things. That is continuing even now.”

Mikimoto currently has eight stores in mainland China, and Yoshida also sees lots of potential elsewhere in Asia. He said he is considering increasing the brand’s retail presence in both regions if the right conditions exist.

As Mikimoto aims to grow its international presence, Yoshida has also made efforts to strengthen its branding and marketing activities. Its campaign visuals are now the same across the world, and product offerings by store are now more alike than they were previously.

“It’s impossible to make everything exactly the same in every market, but about 70 percent of the products we offer are the same globally,” he said. “And then of course because there are also different characteristics of each local market we also have to do our best to meet those needs. We don’t understand everything about every market, so in that sense we intend to leave it up to [the stores in] each location.”

Yoshida remains optimistic about the Japanese market as well, saying that he believes consumer spending is growing, and the economic climate is not so bad.

“We’ve seen a lot of international brands coming [into the Japanese market] lately, but there has been a change in business conditions — Chinese people have stopped coming here to buy things, so in that sense it’s difficult to surpass last year’s business results,” he said. “But we still have to grow, so we hold events and exhibitions in various places, even places that are far from where we have our stores. I don’t think the [fine jewelry] market is very big, but we want to sell our products and grow our numbers in various ways, so I think we’re working very hard to achieve that.”

Mikimoto’s prices start at 40,000 to 50,000 yen, or $355 to $445, and go up from there. Yoshida said that while he doesn’t plan to add a lower-price range, he would like to expand the variety of products offered at these relatively lower prices, including more items that can be worn on a daily basis, such as earrings. The challenge is to do this while still maintaining Mikimoto’s trademark high quality.

“A lot of international brands are offering products to working women and we want to do that too. We want to gradually add more products at easy-to-buy prices that also have a good design, but in our case this is a bit difficult for various reasons,” he said. “We follow a very strenuous system of extremely detailed product checks, and that alone can take around three months. So I would like to be able to speed that up a bit.”

Even more than this, Yoshida’s overall goal for Mikimoto remains the same as it was when he first joined the company, although now he’s looking outside of Japan. Roughly 60 percent of Mikimoto’s total sales still come from its home country.

“I still don’t think Mikimoto is very well-known around the world, so I would like to make more people aware that we have some very creative jewelry — not just pearls, but all kinds of fine jewelry,” he said.