The jewelry designer's freestanding shop in The Shops at Columbus Circle is seen as the first of several to come. 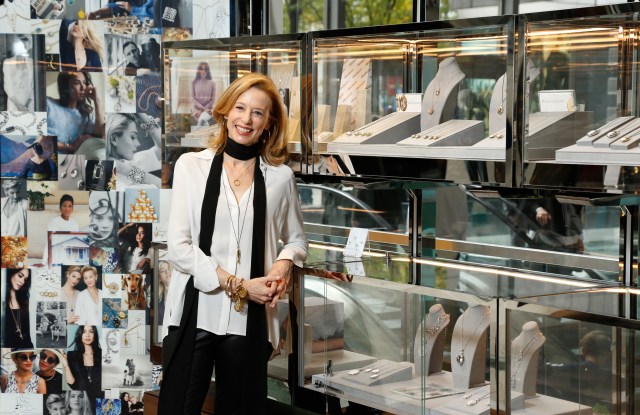 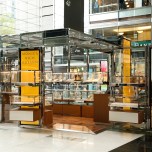 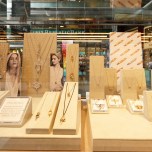 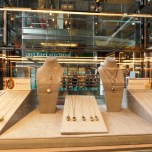 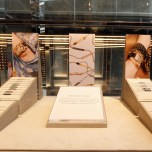 NEW YORK — “It’s like a jewel box,” said Monica Rich Kosann, standing next to her first freestanding store, conspicuously situated on the main floor common area of  The Shops at Columbus Circle in Manhattan.

“We are really lucky because our brand has grown by evolution, not revolution,” said Kosann, suggesting retail as the next step in a natural progression of her 11-year-old fine jewelry brand. “We are trying to grow vertically, within the existing collections, so not to be distracted by adding new collections.”

Today, the designer (an accomplished black-and-white photographer as well) appears dripping in her own jewelry, wearing among other pieces a $30,000 six-charm 18-karat gold bracelet with a millimeter diamond, as well as a fish “perseverance” charm necklace with a black steel chain, priced at $2,775, and a “carpe diem” petite poesy bracelet in sterling silver and black rhodium plating, $475.

She’s demonstrating a “high-low” layering look, how ultra luxury can be styled with more affordable luxury, and the elasticity of her brand. “We do have this huge merchandising ladder that speaks to all different price points and customers,” she said.

Her husband Rod Kosann, who co-owns the business with her, puts it another way: “We’re taking luxury and splitting into two retail models — luxury and accessible luxury. The Columbus Circle shop will be the launch of our new model.”

It’s the less expensive side that the Columbus Circle shop, opening today, showcases. Prices there are from $65 to $3,500 and include some of Monica Rich Kosann’s best-selling gold poesy ring necklaces, $600 to $1,500, and pocket watch key necklaces, $200 to $750. The shop will house 175 to 200 items in all, representing about half the business in terms of stockkeeping units. “Three years ago, we wouldn’t have had the merchandise mix for this,” Kosann said.

“Our price points at Columbus Circle are highly transactional,” Rod Kosann said. And he’s expecting a very high transaction rate considering the steady traffic at the mall, which he points out draws 16 million visitors annually.

Aside from its prime spot, near one of the huge Fernando Botero sculptures that seem to hold court over the mall space, the Monica Rich Kosann shop is distinguished by its unusual, compact design. It’s a polished stainless steel-framed glass box, 10 feet high, with 200 square feet of selling space and doors that swing open for additional display and elbow room.

It’s one of a new breed of five “luxury merchandising units” that Related Urban, the owner of The Shops at Columbus Circle, recently introduced to the center. They bear a contemporary look, compared to the older, smaller wood units that had been merchandised with Burberry and Hermes, among other collections, typically for several months or a season.

Kosann signed a five-year lease at The Shops at Columbus Circle, which is part of  the Time Warner Center. The other four LMUs are occupied by Sugarfina, Moleskine, La Maison du Chocolat and Etienne Aigner.

A shopper might consider these LMUs as sophisticated, large-scale versions of kiosks, which tend to proliferate through malls around the country, though Kosann and officials from Related Urban reject the comparison.

“They evoke a sense of luxury and are customized for the space and the merchants,” said Webber Hudson, executive vice president of Related Urban. “They are multifaceted, in that they are almost like a Rubik’s Cube opening up in different combinations depending on what the merchandise is.”

The glass and steel construction mirror the center’s glass curtain wall facade and its metal trimmings. “There’s an airiness and lightness that lets the merchandise speak for itself,” Hudson said.

They’re also easily adaptable to different kinds of brands and merchandise, but “expensive propositions” for the landlord and the tenants, Hudson said. While they do take up significant common space, “We are certainly very sensitive to the aesthetics, to not in any way obscure sight lines and to maintain traffic flow. That’s why you only see five at Time Warner.”

At the mall at Hudson Yards, a Related project under development on Manhattan’s west side, “we will keep it limited,” Hudson said.

The Kosanns see the potential to open another 20 to 30 Monica Rich Kosann shops in the next five to seven years. Lower Manhattan and Hudson Yards are considerations. The majority would be inline shops, rather than what’s seen at Columbus Circle, and those with enough space and affluent clientele would sell the entire range.

Their retail venture is being managed by Cathy Santos, formerly Chanel’s director of watches and fine jewelry in New York, and earlier  director of Tiffany’s Fifth Avenue flagship’s main floor and the retailer’s salon. Kosann’s collections are sold at such stores as Bergdorf Goodman, Neiman Marcus, Richards, Mitchells, London Jewelers and O.C. Tanner in Salt Lake City, as well as on her web site.

To support the brand’s storytelling philosophy, Spaeth, a visual merchandising firm known for holiday window displays, is creating Monica Rich Kosann windows at The Shops at Columbus Circle, with a series of vignettes depicting a young woman coming to live in mid-20th century Manhattan. Also, inside the shop there is a 26-inch touchscreen to download photos, crop and print them out to the right size to place in a locket. “It’s locket personalization technology,” Rod Kosann said. The screen also provides access to website and to the clienteling system.

Though luxury sales worldwide are in a drought, “we are fortunate as a brand. Our business has been pretty solid,” Rod Kosann said. Sources said it generates about $20 million in annual sales.

Adds Monica Rich Kosann, “We are selling to 25- to 35-year-olds as much as 50- to 60-year-olds. We are not just a timeless, elegant brand. We are contemporary.”

When a piece of  jewelry has a personal story behind it or evokes memories of people and places, “women feel less guilty spending so much money. I like to say it’s ‘guiltless luxury.'”