EXCLUSIVE: Everything to Know About Beyoncé’s Ivy Park Capsule With Peloton

Kohl’s Corp.: Are Separate Dot-com and Store Companies in the Cards?

Monica Vinader, the U.K.-based jewelry brand, has steadily been building its business in the U.S. Vinader last week notched another milestone in its expansion with the opening of a 650-square-foot store on Madison Avenue in Manhattan, which in November will be followed by the launch of an engraving station as part of a new format at Nordstrom’s highly anticipated women’s flagship on 57th Street.

Engraving stations are rolling out to all 55 Nordstrom stores, including five Monica Vinader shop-in-shops. About 25 percent of the collection is engravable, including pendants, bracelets and rings, and messages can be placed on the inside and outside of an item. The designer recently gave Nordstrom the jump on the global launch of her collection.

Vinader launched her brand in the U.K. in 2008. “I consolidated stores and e-commerce, and now have three shop-in-shops at Harrods, Liberty and Selfridges, as well as six freestanding boutiques in London, and I’m about to open a seventh,” she said, adding that she started selling the brand in the U.S. two years ago.

Analyzing consumers’ zip codes, Vinader pinpointed SoHo, TriBeCa and the West Village as the top neighborhoods for customers and leased in 2016 a store on Spring Street in SoHo. “I found this fantastic block on Madison Avenue,” Vinader said. “It’s near the Mark, Carlyle and Surrey hotels, and Gabriela Hearst is my neighbor. I wanted a little jewel box, and I think this is just that. A lot of customers don’t always make it downtown. I felt it was time to bring the store close to them. People shop in clusters in New York.”

Given the localized shopping patterns, Vinader revealed that she’s looking for two additional locations in New York, but declined to reveal them.

The brand has made inroads in the Middle East with four freestanding stores, and Far East with four units in Hong Kong, and a combination of stores and department store counters in Singapore and South Korea.

Personalization is one of the more frequently used buzzwords in the fashion industry, but Vinader zeroed in on it years ago. “The ethos of the brand is to make everyday fine jewelry that lends itself to self-purchase,” said Vinader, who uses fine-jewelry techniques to keep prices down, including plating vermeil, which is made of solid sterling silver, with at least 2.5 microns of gold. Vinader said that’s five-times thicker that the minimum for gold-plated jewelry. The company also cuts its own diamonds and stones for further savings.

“We do engraving in a scalable way. It’s on the spot at no extra cost. It’s done right in front of you and takes 10 minutes. I found it aggravating when I got this monogram and had to pay $10 per letter,” Vinader said, pointing to a tote bag. “That’s after I already spend $200.” 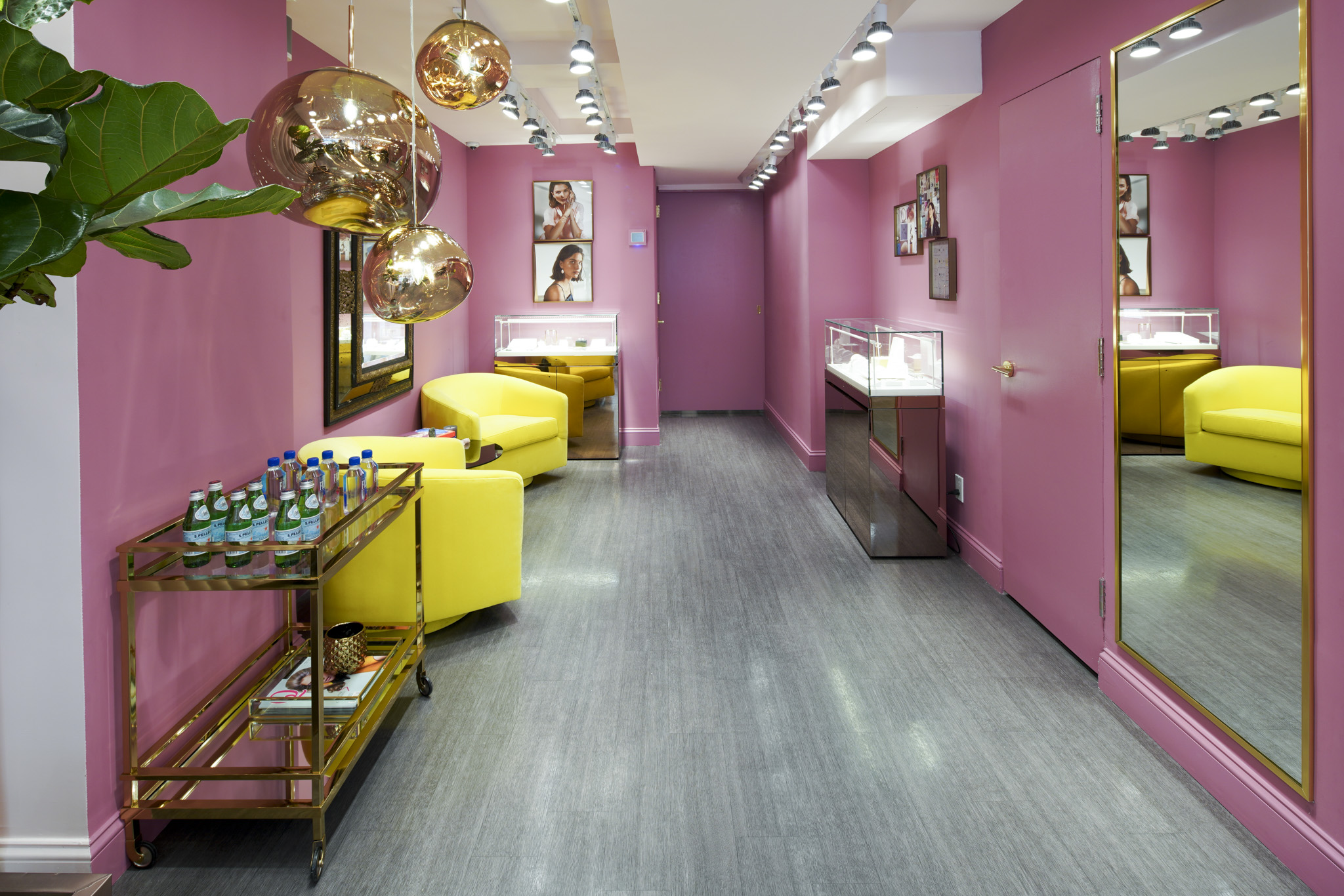 Vinader said the brand is inclusive, given its appeal to a range of ages, and democratic in price. The collection follows the traditional fashion calendar in terms of seasons, while also dropping new collections on a monthly basis.

The designer features organic shapes inspired by her travels. A snorkeling trip she took with her daughter informed the Nura range with its coral-shaped charm necklaces and reef-like bracelets, $85 to $4,995. Atlantis features symbols such as the hamsa or hand, and evil eye, rendered in pink quartz, gray agate, moonstone and amazonite, priced $135 to $855.

“I lived in Mexico by the sea and my early collections were inspired by sea treasures and shapes that I love,” Vinader said. “I go back to the same place in Mexico, Hotel Esencia, south of Cancun and north of Tulum. When I go there, I do a lot of drawing.”