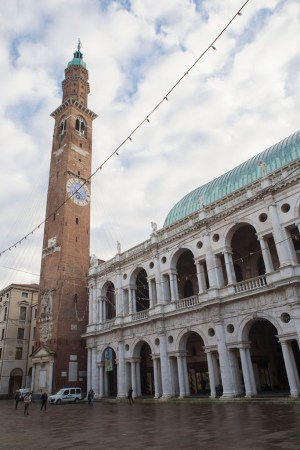 An idea that sprouted 40 years ago has finally bloomed in Vicenza, a hub of fine jewelry-making in northeastern Italy.

This story first appeared in the November 4, 2015 issue of WWD. Subscribe Today.

The Museo del Gioiello is the first European museum dedicated exclusively to jewelry, said Alba Cappellieri, the museum’s director. The 4,306-square-foot museum was designed by Spanish architect Patricia Urquiola and opened in January. It’s located in Vicenza’s impressive Basilica Palladiana, which was designed by Renaissance architect Andrea Palladio and is listed among UNESCO’s World Heritage Sites. The building’s long restoration kicked off in 2007 and required an investment valued at 21 million euros, or about $23.6 million, from the municipal government.

The museum has welcomed 30,000 visitors so far this year. It was conceived and is now managed by Italian trade show organizer Fiera di Vicenza, which is developing initiatives to affirm Italy’s role in the international jewelry business.

Fiera di Vicenza in May signed an agreement with Dubai World Trade Center for a joint venture company, called DV Global Link, which organized the first edition of Vicenza Oro Dubai last April. Last year, the group also made a deal with the Panama Diamond Exchange to promote events focused on diamonds and jewelry in South America.

The museum is part of this internationalization and expansion strategy. According to Cappellieri, it offers visitors “a journey through different cultures, ages and styles.” It stages temporary biannual exhibitions, organized in nine themes highlighting different aspects of jewels, including Symbols, Magic, Function, Beauty, Art, Fashion, Design, Icons and the Future. For the first exhibition, which included about 400 pieces from as early as the 8th century B.C., Cappellieri enrolled various personalities, such as Dutch designer Aldo Bakker, who took care of the Future section, hosting futuristic, innovative interpretations of jewelry; vintage costume jewelry expert Deanna Farneti Cera, who selected a range of pieces from various fashion designers, including Karl Lagerfeld, Franco Moschino, Hubert de Givenchy and Gianfranco Ferré, to represent the link between fashion and jewelry.

Dutch jewelry and industrial-designer Gijs Bakker curated the Design section, showcasing jeweled accessories that focus on ideas rather than materials.

In each area, visitors can learn more on the pieces watching a video available in English.

Besides the biannual exhibitions, a special show, “Jewelry for Peace” is on until Jan. 7. This includes the 20 creations of the finalists of Vicenza Oro’s Next Generation Jewelry Talent Contest 2015, an international competition for designers under age 30.